The future of science 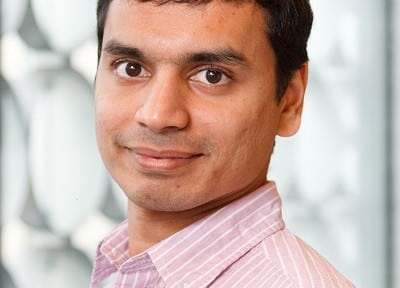 Functionality of materials at the nano scale fascinates Sharath Sriram. Straddling multiple disciplines such as engineering, materials science and nanotechnology, the RMIT senior research fellow and Associate Professor is no less passionate about advocacy and team mentorship.
In fact, his grand vision is “to advance science – the knowledge, the culture, and its perception”.
Science, technology, and innovation pervade every aspect of human existence, and scientific outcomes determine even the most mundane parts of our lives. “And that is every small aspect from pasteurised milk in the morning, to modes of transport to work, technology-enabled workplaces, comfortable attire and footwear used through the day, to temperature-controlled homes,” Sriram says.

Early in his career, Sharath Sriram helped established a $30 million research facility, and he continues to mentor young scientists and advocate for early and mid-career researchers. In September, he was awarded the 2016 3M Eureka Prize for Emerging Leader in Science.
“It is in an incredible honour and validates years of hard work by me and my team,” Sriram tells Indian Link. “The prize creates recognition of my work, especially in areas beyond pure science – in creating state-of-the-art facilities in Australia and advocating nationally on the behalf of young researchers.”
Unlocking new properties in materials and devices at extremely small scales, to see how unique and exceptional properties can lead to advancements, Sriram’s research tackles diverse problems in energy generation, artificial intelligence and flexible/biocompatible devices harnessing micro and nano-technology.
An alumnus of PSG College of Technology Coimbatore, he moved to Melbourne in 2004 to pursue a postgraduate degree in microelectronics. His outstanding academic commitment secured Sriram one of six extremely competitive Endeavour International Postgraduate Research Scholarships (IPRS) at RMIT, completing his doctorate on synthesis and characterisation of high performance and CMOS-compatible piezoelectric thin films.
“Starting off on this pathway was a combination of chance and fascination,” he explains. “At RMIT, I was introduced to the process of making microchips and I was immediately hooked.”
He went on to win the Australian Institute of Nuclear Science and Engineering Gold Medal for Excellence, the National Measurement Institute prize as well as a Victoria Fellowship.
He was also a recipient of the Australian Research Council Post-Doctoral Fellowship, with a research focus on micro-devices for chemical sensing and dynamic manipulation of surface nanostructures, utilising in situ techniques with electrical stimuli.

“The PhD was a productive and exciting phase as I explored science, grew my research networks, and started to develop grant writing skills,” Sriram says. “Having chosen a topic with no existing expertise, my start to a research career was right from the basics, where I had to create my own research culture and environment. Rather than a challenge, this proved to be an opportunity, where I could begin shaping things with my vision.”
The independent research group he set up has since grown exponentially with high impact publications, significant national and international media coverage, alongside $8 million in funding.
In fact, Sriram played an integral role in enabling university management to understand the need for large-scale investment in micro and nano-device research, which led to the establishment of the $30 million Micro Nano Research Facility. The facility houses state-of-the-art equipment worth $12 million.
As its deputy director, he has been heavily involved in all aspects from conceptualisation to design, build and implementation.
“With the departure of the founding director, I have also had to take on additional responsibility in ensuring optimal operation of this large-scale, open-access research infrastructure,” he says.
In doing so, Sriram has fostered the next generation of research leaders. Placing as much value on failure as success, he focuses on being a leader rather than a manager for his team.
He is especially proud of the number of fellowships and prizes the group has won in the last three years – from the Australian Research Council, the Royal Society of Victoria, the Winston Churchill Memorial Trust, the Australian Nanotechnology Network, and from within RMIT University.
Echoing former Australian chief scientist Professor Ian Chubb’s concerns about dwindling enrolments in science, Sriram believes that the onus is on scientists to reverse this trend. Strong leadership and better advocacy are needed, he stresses.

“All my research is enabled by the direct and indirect support of Australian taxpayers. Therefore, I consider it my duty to communicate the importance of science and its far-reaching outcomes in accessible language,” he says.
“I have endeavoured to create a fascination for science, through media articles and outreach activities. My research outcomes have appeared in over 2,000 media outlets in the last five years,” Sriram emphasises.
Co-chairing an early-career symposium on nano materials and devices for the Australian Nanotechnology Network, he joined the Executive Board of the Early and Mid-Career Researcher Forum (EMCR) under the stewardship of the Australian Academy of Science, eventually becoming its chair.
The EMCR Forum advocates to policy makers, academia and the general public on the need to support and nurture Australia’s future science leaders. Sriram will help drive Australia’s innovation agenda through Science Pathways 2016: Future Leaders.
“Behind the persona of a researcher, governed by research metrics of publications and grants, my life includes a young family. My wife and I jointly lead our research group. We have a young son, about to turn three, whose sole joy is in ensuring we focus on him and improve our work–life balance,” Sriram reveals. “This aspect of life serves to keep me grounded in my leadership and empathise with different personal scenarios of team members. It also drives me more to actively communicate the importance of science and research in the context of ensuring a better future – one where innovation sustains economies, science is viewed with fascination, and the life of scientists with envy.”