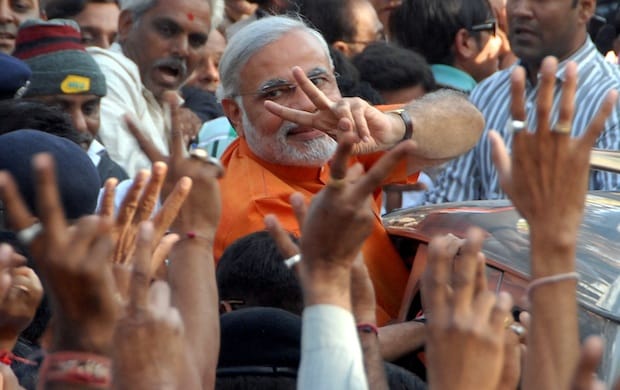 The excitement and the jubilation notwithstanding, some aspects of Modi’s win could be cause for concern

If you are a Narendra Modi supporter or fan, then it would be best if you do yourself a favour and skip this column. Alternatively, please take some blood pressure medication before proceeding further.

Prime Minister-elect Narendra Modi comes to power with the sort of expectations Indians had of Sachin Tendulkar whenever he came in to bat.

But Sachin had, even at the early stages of his cricket career, a track record and class stamped all over him. Not to mention, lots of innate decency.

Mr Modi is badly tainted by the murderous Gujarat riots of 2002 and his alleged culpability but ironically (and, tragically!) that seems to be his enduring appeal and that liability has been skilfully and wilfully converted to become his greatest asset.

The electorate had been waiting for the Congress party with baseball bats and has given it the most fearful lynching. It was eminently well deserved, too. Corruption was endemic; the Prime Minister was lame duck, ineffectual and wielded no independent power, and there was never a coherent vision articulated. The country was on auto-pilot whilst the plane was losing height precipitously.

Critics justifiably christened him Man Maun Singh. In his decade long Prime Ministership, just 3 Press Conferences were held. Even President Obama who was criticised for not giving many Press Conferences, fronted up 79 times in his first 4 years, alone!

To anyone who wants to cite Mr Modi’s credentials as a great reformer and having an impressive record of governance, probity and development in Gujarat, I have this to say: it is a furphy.

The track record does not match the hype at all. In the Modi years, the Gross State Product (GSP) of other states has grown faster. Even the per capita GSP of Gujarat trails Goa, Maharashtra, Tamil Nadu and others. Nor is Gujarat the leader (or even in the first three) in unemployment rates. In Foreign Direct Investment (a pet project of Modi’s), Ahmedabad comfortably trails Mumbai, Delhi, Chennai and  Bangalore. In income inequality (both rural and urban) Gujarat trails over 15 other states.

Even by other measures viz. quality of life, human development index etc., Gujarat is a sluggish performer, certainly not the class leader. Don’t take my word, go to http://qz.com/171409/gujarat-by-the-numbers/

Why has Mr Modi not had the courage to abolish prohibition, even after 67 years of Independence? Not only is it a joke internationally, but widely lampooned and flouted in Gujarat itself. Never again should Indians sneer at policies of hardline Islamist Gulf states, whilst a ridiculous prohibition law exists in one of the most prominent states of an otherwise liberal democracy.

Can someone also enlighten me as to why, despite this hypocritical law, alcohol is so easily available in Gujarat and consumed with minimal fuss, by tens of thousands of people, everyday? If Mr Modi was such an efficient administrator, how come the enforcement of this idiotic law was (and continues to be) so lax and corruption-ridden?

Why did the BJP field over a hundred candidates with criminal records? Out of the 281 seats won, 98 have been won by people who have the slur of criminality. That is over 35 %, no less! If we were to make a three-egg omelette and have just one rotten egg in it, what would the end result be?

Why did the BJP align with an overtly communal party (Shiv Sena) which has a cynical disregard for rule of the law? Did you know that around 85% of the candidates it fielded are/were facing criminal charges or have been convicted of them? 15 out of their 18 elected MPs have criminal cases pending. It is dismaying, no less, to see them all waved into parliament enthusiastically by electors in Bombay, in particular.

India is a country of 1.25 billion in which one in seven people (or 14 % ie 175 million) are of the Muslim faith, the third largest Muslim population in the world. How can such a country prosper unless there is societal harmony, opportunities and equality for everyone, regardless of their faith?

Instead of spending money on sops to appease Muslims (but, which hardly reached them!) past Governments should have done much more to address issues of glaring inequity. Despite what many Hindus think, Muslims are a highly discriminated (not pampered!) minority in India. And, they need to be treated with respect – not told forever to “go to Pakistan”. By most education and employment yardsticks, it should be a concern for all thinking Indians that the Muslims have now fallen behind even the Dalits.

I hope the Modi Government not only withdraws the Haj subsidy (which is a sort of religious interference) but also imposes a pilgrim tax for organising religious events such as the Kumbh Mela or various pilgrimages to Amarnath, Kailash Mansarovar etc. The Indian State should have no role in the religious beliefs or practices of its citizens and it should subsidise no one overtly or covertly.

Education is certainly the panacea and should be a top priority for the Modi Government: education of the sort one gets in schools and universities and not in madrassas. The website of the Ministry of Human Resources talks about madrassa modernisation in the name of Muslims. In Uttar Pradesh, under both Mayawati and Mulayam Singh Yadav, the government failed to construct more schools and colleges. Instead, it was providing for madrassas and modernisation of madrassas. This is wrong because madrassas are religious institutions and the government should not play any role in them. Religious schools like madrassas create segregation – which is terrible both for Muslims and for India.

Job opportunities is another bugbear. It should not be as difficult for a Muslim to get a job in India as it is for a new Indian migrant in Australia. Of course, there is discrimination – in both places. Usually latent, often blatant.

Muslims also face naked and ugly bigotry whilst buying or renting property. The very people who are discriminating against them in this way, then have the gall to complain that they live in ghettoes – after virtually driving them in there.

Mr Modi is capable of tackling all the above issues pertaining to India’s most populous and restive minority. But, it is to be seen if ideological considerations queer his pitch. He ran a campaign that promised development and good governance, and avoided religiously divisive themes. Secularism is enshrined in the Indian constitution and that is what distinguishes India from Pakistan and unites our amazingly diverse matrubhoomi. He would do well to concentrate on developing India’s creaking infrastructure and creating jobs for the million odd who join the workforce, each month, and avoid the state’s foray into religion – be it mandir or masjid.

The incivility routinely demonstrated by Modi supporters on social media forums that I have recently seen is unbelievable. There is not just a hope for a better Bharat and a mahan Bharat, but sadly there is an ugly element of triumphalism and scorn for any differing opinion.

Above all, it should not be forgotten that more than two-third of Indians did not vote for the BJP/ Modi and notwithstanding that (with just 31% of the vote they won 282 seats), the BJP needs to govern for every Indian.