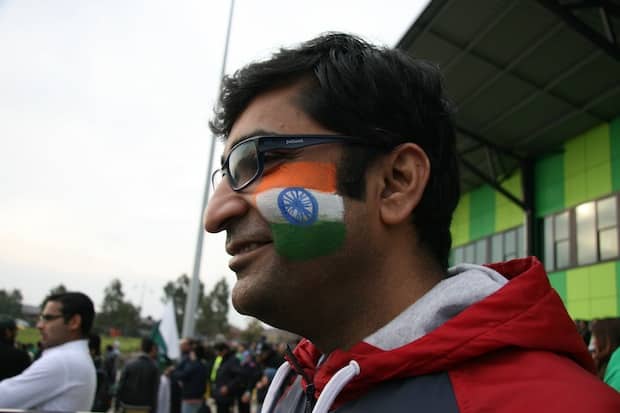 How fun was that. It wasn’t the Grand Final, but definitely it was the match of the event at the International Australian Rules Football Cup. No sign of pies, hot chips and beer to keep us fed and warm on that icy Melbourne day, but I did see jalebi, samosa, coffees and chai, thank you.

The support for both teams, the Indian Tigers and the Pakistani Shaheens (peregrine falcons), from all the Melbourne fans was overwhelming.

It was a decent turn out which shows that the locals are behind the idea of the Dosti (Friendship) Cup. It’s almost as if every opportunity Melbourne has to celebrate multiculturalism and the wisdom, creativity, and boldness of any culture, the people and their ideas, it is taken and immersed. And those who have roots in those cultures in Melbourne get an opportunity to feel home away from home, to reminisce, or to take the reins and share a part of themselves with their beloved fellow friends.

The Dosti Cup, India v Pakistan, yes, there was elation. And yes there were tears. The final score, 14.17.101 Pakistan to 1.1.7 India. Given that Pakistan played for the first time in the IARF Cup, only forming as a team as recent as in 2013, their men did exceptionally well. Well placed and controlled kicks and strong marks throughout the entire match.

Until of course India flicked a switch and turned on their spirit in the final quarter. India played too much like gentlemen throughout most of the match, amongst each other, and with the opposition; fine for cricket maybe, but just not converting at all for them.

Suddenly, to the crowd’s pleasure, there was a switch. Finally there was synergy in the hearts of the Indian players. This was what footy is all about, heart and soul, die hard determination for that ball, and a fight never to go lightly.

The players started to get to the front, lead for the ball, jumping higher to take that specky, keeping the ball moving in the direction of their goal, following up disposals, shepherding, and supporting their fellow players, talking, shouting and encouraging.

It was a hard thing to face and keep your head held high, being so far behind in the score. The Indian Tigers final spurt made the crowd see that there is much more in there. One supporter in the crowd wanted to congratulate the Tigers for finding that boldness and fight while facing that foreseeable loss, and still put on a show for them, and for India, Pakistan and Melbourne. And I’ll put in there as well a thank you myself for blessing Melbourne/Australia with a new fantastic tradition, the Dosti Cup, the next of which we will wait for with anticipation.

Talking with Indian Link after the match, the coach and captain of the Tigers, Sudip Chakraborty said he was already thinking to the future, and to next year. He agreed the players do eventually warm up and get into a synergy, as was seen in the match against Pakistan, but he admitted it can be a difficult task to take a group of men from all backgrounds and all parts of India and in such a short length of time and expect team synergy right off the cuff. “The players do warm up and start getting the swing of it as a team but it takes time, so next time we come, we might consider arriving and training together for a month in advance”.

His counterpart Ovais Rehman of the Pakistan Shaheens was gracious in his comments after the match. He told Indian Link, “For me, the game was more about the integration of two societies. We played the game for the game, rather than what is behind us. In the end, one team had to win; but I am proud of the collective efforts of both our teams”.

Through the whole two-hour match the players were spurred on by four dhol drummers, their beat travelling each ends of the ground. It was great to have a new way to experience Australian Rules Football.