"Thank you for the memories" 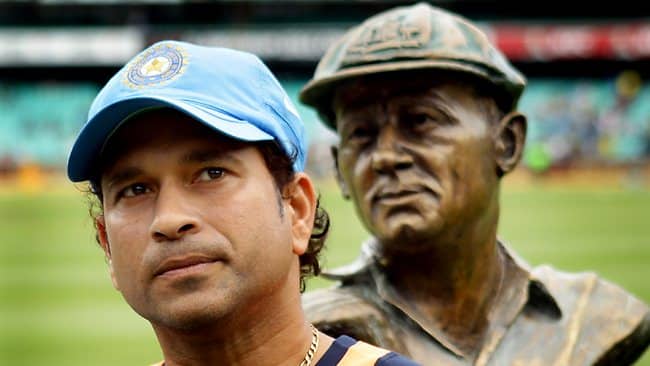 Reading Time: 3 minutesIt was a simple statement that says so much about the man, writes ABC broadcaster TRACEY LEE HOLMES

Sachin Tendulkar, the god of cricket, revealed the utmost humility in being inducted as a Bradman Foundation Honouree at the SCG last night – an appropriate venue given the many runs made at the ground, that he described as his favourite, and the many fans he delighted in doing so.
To celebrate the man who has scored more runs than any cricketer on the planet, most Test 100s, most One Day International 100s and having the legendary Don Bradman himself pay tribute to Tendulkar as the cricketer who ‘plays most like me’ is fitting, but what he did on a cricket pitch is just the starting point. Off the field he is as committed, precise, spectacular and dominant as he ever was on it.
The Bradman Gala Dinner, celebrating its 25th anniversary last night, truly found an honouree that exudes the five key values of Sir Don – courage, honour, humility, integrity and determination. Sharing the award with Australia’s most successful captain, Steve Waugh, does not diminish the accolade, it simply magnifies it.
Together on stage the single minded determination of both men was sprinkled with the clear joy they experienced in playing the game they love. The belief that winning wasn’t everything, it is the only thing, was evident as both men discussed how they plotted and schemed to beat each other and all the while maintaining absolute respect for the other’s talents.

Tendulkar told the story of nervously preparing to meet a 90 year old Sir Donald at his home in 1998.
“We were driving to his place, I was with Warnie.”
The 1000 mostly men, all in black tie, filling the room at the SCG broke into fits of laughter.
“I haven’t cracked the joke yet.”
More laughter as Sachin had the entire audience, not for the first time in his life, eating out of the palm of his hand.
“I told Warnie, Warnie you being an Australian hero, you should start the conversation, I don’t know what to talk to Sir Don. And what he said, you are a batsman, you would be able to understand him better.”
“I asked him a question, ‘what would you have averaged in cricket today?’ He thought about it and said ‘maybe 70’. The natural reaction was ‘why only 70 and not 99?’ He said, ‘C’mon, that’s not bad for a 90 year old man’.”
“It was heartening to know that he watched cricket so closely and he was aware of everything.
“To be described by Sir Donald as the man who played cricket most like him was probably the greatest compliment of my life.”
And yet, if Sir Donald could speak now, there would be no doubt that it’s the transition Tendulkar has made to life after cricket that is worthy of the highest praise. Both he and Steve Waugh are known for the incredible work they do for a number of charitable organisations, including their own, in alleviating poverty, in providing medical treatment, in helping those who slip through the cracks and would otherwise be forgotten.

Sharing the stage with Tendulkar, Steve Waugh spoke of the ‘overloading of the senses’ while visiting India many times as a cricketer, and many times since. One couldn’t help make the comparison to the sensory overload any spectator experienced in watching these two men play the game – craftsmen, exuding the utmost finesse, mentally grasping each moment and extracting the absolute most from it.
They are lessons from the field that can be applied to all facets of life. Sir Don would indeed be proud. They are lessons these two now retired national captains apply in making the world a better place.
So, humility aside Sachin, it is we who must thank you.