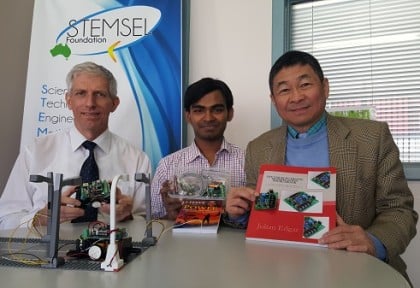 Among the student community, academia and political thinkers STEM (Science, technology, Engineering and Mathematics) subjects are gaining increasing traction to ensure future economic growth. Adding a social development dimension to these science-centric subjects, an Adelaide enterprise has come up with STEMSEL (Social Enterprise Learning) to help students write programmes that will benefit lay people in their daily walks of life.


A young engineer from Kerala, Richards David, working from his Adelaide base, is playing a vital role in spreading STEMSEL knowledge to students in India and other parts of the world.
In a nutshell, STEMSEL kits help students easily understand digital technology to write programmes in a variety of areas.  While programming skills once required university level education, STEMSEL makes it, in a sense, child’s play; even primary school children can acquire the skill. In view of its ability to empower people at grassroots level, it has attracted the attention of such an eminent person like Prof. Muhammad Yunus of Microfinance fame and founder of Grameen Bank in Bangladesh. At a recent forum at Dhaka, he declared, “STEMSEL, let us do it.”
Inspired by his enthusiasm, efforts are now being made to establish YSSBC (Yunus STEMSEL Social Business centres). As a major step in this direction, SSM Institutions, an engineering college in Komarapalayam in Tamil Nadu, recently signed a MoU with STEMSEL Foundation India, an enterprise that Richards manages from Adelaide. This MoU will help establish STEMSEL clubs to enhance local students’ innovative skills. Soon they are set to compete with their counterparts in Rajasthan STEMSEL clubs that have sprung up as a result of its sister-state agreement with South Australia (as reported in Indian Link in April.) Winners in this competition are expected to participate in the finals at the Adelaide Royal Show later this year.
The seed for STEMSEL India was sown when Richards David came to Adelaide in 2009 to study Electronic Engineering at the University of SA.  During his three-month internship, as part of his graduate course, he came to be mentored by Dr. Peng Choo, Director of Adelaide STEMSEL. Encouraged by the fast-talking Peng and Miroslav Kosteci, co-founder and Technical Manager, Richards established his Indian enterprise in his native Kerala. Ten engineers were employed in the manufacture of STEMSEL’s micro-controller boards – the size of a biscuit tin – that include a few input/output sensors and a built-in motor to be programmed via a USB cable with ezSystem of eLabtronics co-located at Adelaide’s STEMSEL base.

Among the programmes designed and built by students at various STEMSEL workshops is a 3D printed street lighting system that regulates electricity output according to prevailing light consequently reducing greenhouse gases.  Kaviya, a 14-year girl from a southern Indian school, designed a prototype called ‘Texting Plant’ which sends a message to the farmer when his plants need watering. It was a winning entry at an earlier Royal Adelaide Show. It also earned her $5000 from the AMP Tomorrow Fund.  A local Year 6 boy’s solar tracker earned him a trip to Singapore. All this goes to show how very young students can sharpen their inventive skills.  Loreto College, a local private girls school uses STEMSEL to dovetail International Baccalaureate subjects into their studies.
Teachers mentoring students affirm that STEMSEL kit cuts down programming time by as much as 90 per cent because of its use of drag-and-drop graphic interface instead of hundreds of lines of assembly codes.
John Phillips of the University of Sydney says “STEMSEL targets primary school children at an earlier age than teachers otherwise appreciate.”  According to Rob Moor of Wycliff Christian School, NSW, “STEMSEL most importantly finds solutions to social and environmental issues helping poor countries.”
No surprise then that Dr. Yunus was prompted to declare “STEMSEL, let us do it.”
The Kerala boy Richards who came to Australia at the young age of 18 is ‘doing it’ as STEMSEL clubs are now operational in India, Australia, Malaysia, Bangladesh, Vietnam and Tanzania to train children to create programmes that will empower the underprivileged  and benefit the community at grassroots level.
- Advertisement -
Share
WhatsApp
Facebook
Twitter
Linkedin
Previous articleDoctors Inc
Next articleShe’s a Brisbane girl!