Tamil books at your local library 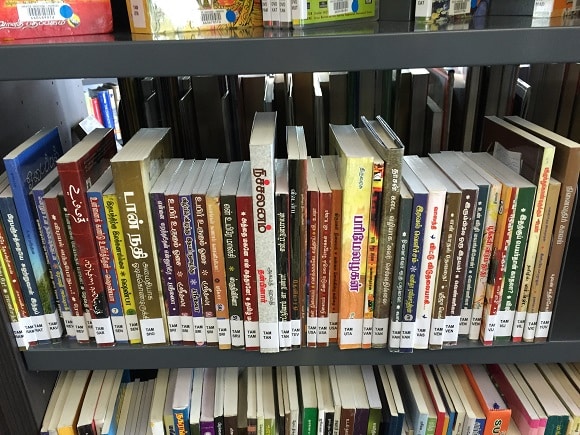 The collection numbers 500 and includes works of fiction and non-fiction, illustrated children’s books, magazines and DVDs.

The collection is a result of community consultation held over a period of a year and a half; a reaction to the increase in numbers of people who identify as Tamil to over 2000 in the City of Greater Dandenong.

The collection covers varied themes: from love, music and history to conflict, revolution, caste and discrimination. It also includes translations of, amongst others, English, Norwegian and Russian works.

The collection joins the Punjabi language pool that was launched earlier this year.

The launch was presided over by Cr. Matthew Kirwan, who represents Red Gum Ward, one of four wards that make up the City of Greater Dandenong.

Speaking at the launch, he noted the increase of the Tamil speaking community in Greater Dandenong to over 2200 people in the 2011 census, adding to the diversity of Dandenong which currently represents 160 nations. While acknowledging the suffering that many in the Tamil community had experienced, he recognised their intent to build a new life in Australia while maintaining their rich heritage, and said that the Tamil collection was a response to this need.

“A library is more than just books,” he said. “It is a gathering place for the community, an interactive hub that provides the opportunity to learn and make meaningful connections with others. It is a place to build community and it is very important to have a collection such as this for the Tamil speaking community.”

The launch included a short cultural program of pop and folk inspired singing and dancing. Surprisingly, the ancient and rich tradition of Tamil classical dance and music were not showcased.

The libraries of the City of Greater Dandenong, which comprise the Springvale and the Dandenong library are the busiest in Victoria, getting over a million physical and virtual visitors in 2012 – 2013. They also boasted the most loan transactions per hour and the highest loans turnover in Victoria during a study conducted in 2011. This number was set to increase when the Dandenong library moved to its current location in 2014. The transition was part of the $7.5 million Dandenong Connect project, and doubled the floor space of the library, included meeting and community spaces and extended the library’s opening hours.

Check out the New Punjabi Collection at Springvale