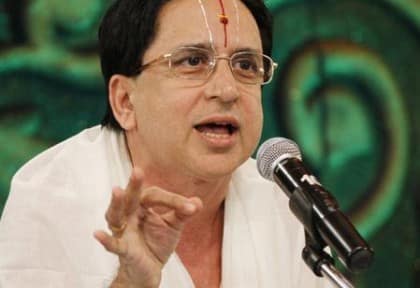 Sri Damal Ramakrishnan, a renowned pravachan pandit visited Melbourne last year as a guest of the Vedic Society of Victoria, and gave a series of pravachans at the Scholastica Hall in Burwood.

Sri Ramakrishnan and his sister Smt Perundevi have given religious discourses together for almost 40 years.  Their talent blossomed in their childhood under the guidance of their very erudite and devoted parents. Sri Ramakrishnan has given lectures on All India Radio, Doordarshan and various private channels the most recent being a series of talks on Vijay TV on the subjects of Saranagathi and Rama Jananam; previously his talks have included such topics as Krishnaarpanam, Tiruppavai, Ramayana and the Mahabharata.  He is particularly fond of Narayaneeyam, a 16th century epic Sanskrit poem, as he considers it an immense treasure-house of Sanskrit literature.  This composition, consisting of 1036 verses is a magnum opus – a condensed version of the 18,000-verse Bhagawatha Purana – written by the great poet Narayana Bhattathri, who was an ardent devotee of Lord Krishna as He is enshrined in Guruvayur. Sri Ramakrishnan’s talk on Narayaneeyam and the glory of the Lord of Guruvayur left the audience spellbound.
There was not so much as a whisper during the two-hour talk, and people sat transfixed listening to the glories of Lord Krishna.  This writer overheard several people from the audience express their desire to make a pilgrimage to Guruvayur on their very next trip to India!
In one of his morning talks, Sri Ramakrishnan spoke movingly about Swami Ramanuja and his immense contribution to Vedantic thought, and indeed the spread of Sri Vaishnavism and Bhakti throughout India. In particular, he highlighted Ramanuja’s great disciples who took it upon themselves to spread their Preceptor’s message far and wide.
In another lecture, he spoke about the great female Vaishnava saint Andal and the hallmark and significance of her Krishna-bhakti which was one of compassion for all.
He delighted the audience at another event with his talk on Krishna Leela.  People simply sat open-mouthed as Sri Ramakrishnan recounted and described the fateful day that Devaki got married to Vasudeva, lovingly conducted by none other than her brother Kamsa, when the great proclamation from the sky predicts his death at the hands of his nephew; Vasudeva’s noble and dharmic offer to save the life of his newly-wedded wife. [It is said in the scriptures that one has four options when faced with a death threat: advice, punishment, diversion – and when they fail, sacrifice: that is offer something really big in exchange for something small. This advice is as relevant today as it was then].
Sri Ramakrishnan regaled the audience with the tales of Krishna’s antics as well as His transcendence.  He spoke eloquently about the Lord Varadaraja, the deity of Vishnu at Kanchipuram, how the town of Kanchi has been elevated because of the Lord’s temple there.  He moved the audience to tears with his talk on Lord Rama and his brother Bharata and their exemplary relationship. On the last day, his talk ended on a celebratory note, with his retelling of Krishna’s marriage to Rukmini.
Sri Ramakrishnan held the audience in his thrall, and those who attended the 4-day event were treated to a feast of religious knowledge, and felt they were part of a special spiritual experience.