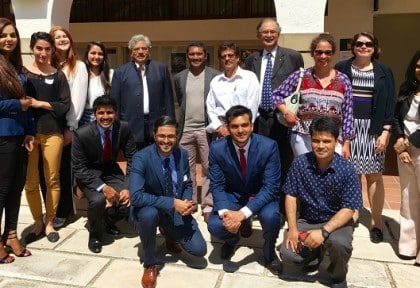 It has been claimed that the 21st century will be ‘India’s century’. To evaluate this idea, an ‘India Summit’ was organised at the University of Sydney recently. One of the first events centred on India’s foreign policy and domestic strengths held at the University, the summit was organised by Kiriti Mortha, a postgraduate student from Andhra Pradesh, under the banner of the South Asia Study Group.
The specific objective of the India Summit was to extend the discourse on India amongst academics and policymakers in Australia, while enabling students to gain greater insights into the South Asian nation, and to enable researchers, community members and politicians to share their views and thoughts with the wider community.

Some 50 distinguished academics and postgraduate students participated in this summit and challenged the speakers by triggering some critical questions. Indian MP Sitaram Yechury joined academics Dr Priya Chacko from the University of Adelaide and Dr Dilip Dutta, Ruchi Motial-Suri and Gail Pearson from the University of Sydney, and community stalwart Neville Roach AO as speakers. Sitaram Yerchury presented a glance at contemporary India, particularly the challenges faced by the nation.
“We need to build our infrastructure and create jobs, leading to expansion of the domestic market to usher in a sustainable, inclusive, healthy growth trajectory,” said Yechury, the keynote speaker.
He provided a broad background on India’s domestic scene and the diversity within the country
“The typical Indian that the West perceives only captures a small population of India,” Yechury said.


Indeed, his own personal story elucidates this: he was born in Chennai in Tamil Nadu into a Telugu family, educated in Hyderabad in Urdu for the most part, and then moved to Delhi. Such ‘unity in diversity’ is fundamental to India’s democracy and economy, he added.
He also spoke of the need to focus on educating the youth of India and equip them with the kind of skills that are relevant to the growth story of the country.
He also took questions that included the position of the Communist movement in contemporary India, and the differences between the democratic set-up in India and Australia.
In attendance were many of Yechury’s contemporaries from his alma mater, Jawaharlal Nehru University, who appropriately upheld the JNU spirit of questioning the status quo.

Dr Chacko’s presentation on India’s foreign policy agenda since 2014 was one of most anticipated talks of the day, given the tensions playing out on our western borders at the moment. Having conducted extensive research in the area and the geopolitics of the South Asian region, Dr Chacko decoded the foreign policy of the Modi government in the past two years.
“The current government is pursuing foreign policy in a more aggressive manner is laying emphasis on improving Brand India,” said Chacko.
Speaker Dr Neville Roach recalled his early days in Australia (he was “one of the first 26 Indians in Adelaide” back in 1961), and cited the role all new Australians play as an integral part of the service industry in this country and the evolution of the economy.

A spiritual element was brought in by Dr Dutta, who spoke on the need for new perspectives on sustained human development. For too long, he lamented, human capital development has been explained by means of quantitative measures such as literacy rate, life expectancy and so on. To make human capital development more sustained and more valuable, he argued, we must focus on non-cognitive aspects such as spiritual development. He supported his argument with an analysis of Swami Vivekananda’s Vedanta which transcends all religions and is essentially a philosophy of life. He has delivered this talk as a keynote address in conferences held in Tokyo and Bali this year.
Ruchi Motial-Suri leveraged her extensive experience in off-shoring to look at how the Australia-India business relationship can grow with increased multicultural sensitivity. Her talk presented practical on-ground experiences and tips that could be of benefit. The take home message from Ruchi was, that to successfully do business with India, it is important for the foreign investors to take the time to fully understand the social and work cultures of Indians which vary tremendously from region to region.

It was an interesting coincidence that both the keynote speakers not only attended JNU but were also contemporaries there. Gail Pearson, the closing keynote speaker, brought together all four talks. Summarising, she said, India has immense potential to grow; the foreign policy and domestic scenario in India position it to be a world leader.
As Masters student in Public Policy Kiriti Mortha, coordinator of the South Asia Study Group and curator or the summit, told Indian Link, “I’d love to see an Australia India Centre or Institute at the University here.”
- Advertisement -
Share
WhatsApp
Facebook
Twitter
Linkedin
Previous articlePack your bags for Penang!
Next articleThe role of parents as educators