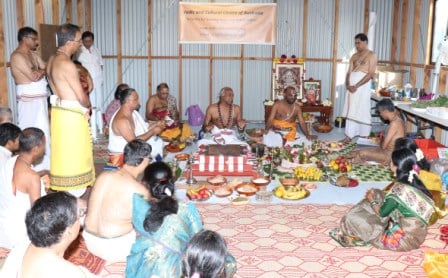 Reading Time: 3 minutesLaying the foundation stone for the centre signifies the growing popularity of Sanskrit and the Vedic learning, writes USHA RAMANUJAM ARVIND

“Unlike many ancient traditions worldwide, Vedic chanting has withstood the test of time. It is recited daily by an unbroken chain of generations, travelling like great waves through living substance of mind,” Swami Vigyanand stated at the inauguration of first Hindu Conference in 2008.
Aimed at passing on this precious legacy to future generations in Australia, the Sydney Veda Pathashala (SVP) was founded at this very conference. A handful of volunteer teachers soon started imparting the knowledge of sacred texts to an eager group of students in a structured format. It was the first of its kind outside India, and a novel experiment. The numbers grew rapidly, prompting the core group to aspire for a place they could proudly call their own, where Sanskrit and Dharmic values would flourish. Approved by Department of Education and Training?s Community Languages programme, the thriving weekend classes are now being conducted at six locations across Sydney.
Half a decade on, that dream has finally come true when the foundation stone for the building was officially laid at Greystanes recently. Known as the Vedic and Cultural Centre of Australia (VCCA), the centre is the culmination of years of dedication and hard work by the group of volunteers driving the project.
Speaking to Indian Link, Vishwa Hindu Parishad (VHP) general secretary Akila Ramarathinam said that their tireless work had paid rich dividends. ?Learning Sanskrit is a thriving culture not just in Sydney, but also Melbourne and Brisbane. Thanks to our extensive support network, SVP will become a cultural icon for all Indian Australians and a role model for other countries,? said Akila.
Presided over by Hindu priests from various temples, the VCCA open day was celebrated with a Bhoomi puja, homams and chanting at the venue, strictly in keeping with the customs prescribed in the shaastras.?Swami Chandrashekarananda of Ramakrishna Mission conducted anugraha sambhashanam, while Shri Ashok Chowgule laid the foundation stone.
The morning rituals were followed by a cultural ceremony at the Redgum Centre in Wentworthville, showcasing the rich and varied talent of its students.
The event was attended by several luminaries including former premier Nathan Rees; Member for Parramatta, Julie Owens; Member for Granville, Tony Issa; Deputy Mayor Holroyd Council, John Brodie; Hornsby Councillor, Dilip Chopra; senior priests and community members.
Speaking on the occasion, Hon MP Nathan Rees promised every possible support to build this facility.
Holroyd Deputy Mayor said he was very proud that the iconic centre was underway in his local council area and extended his support.
VCCA has also launched its own website, dedicated to promoting its activities.
Once completed, the centre will provide a permanent facility for conducting Vedic and related ritual activities, besides cultural education for children and adults. Vedic chanting and Sanskrit lessons (basic and advanced), classes on the Bhagavat Gita, Upanishads, Sahasranaamam, Samskrita Shibhiram, Vedic rituals (and its relevance in today?s world), meditation, devotional music, spiritual discourses and Vedic retreats are some of the activities that will be offered.?A fully functional resource and learning centre is being planned, complete with a well-stocked library and multimedia centre. A full time Vedic scholar and Sanskrit teacher will also be available at the centre. Its location (off the Great Western and Cumberland Highways) was specially chosen to make it accessible to families all over Sydney.
Besides promoting aspects of Hindu culture, SVP has hitherto participated in many mainstream events like Clean Up Australia. Its members were invited to take part in the official Queen?s Baton Relay ahead of the Commonwealth Games in New Delhi.
?We are well aware that such activities need high capital investment for establishment and on-going maintenance. It is our humble request to the wider community to donate liberally for this great cause and become a family patron of this project,? Akila requested.
To find out more or get involved contact Divakar Harle on 0415 436 646.