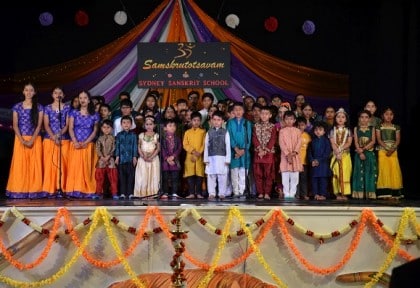 Starting with humble beginnings, the first community language Sanskrit school in Australia, perhaps the first one outside India, celebrated 10 years of incorporation in an elegant function at Roselea Community Centre in October 2016.

Aboriginal elder Les Bursill welcomed over 250 guests to the country, followed by traditional lighting of the lamp. The program commenced with the singing of the tri-lingual Australian national anthem in English, Dharruk and Sanskrit as it customary in Sydney Sanskrit Schools programs.  Besides celebrating ten years of foundation, the program was based on this year’s UN International Year of Pulses. Dance, drama and skits were all delivered by children, as young as four and up to 18 years, in Sanskrit. The MCs were former students of the school now enrolled as teachers.

Dhara Matharam Raksha, ‘Protect the mother earth’, a play on protecting mother earth was played by the Glenfield batch.

The ten years journey of Sanskrit school, ‘a bird’s eye view’, was presented by Liverpool batch, and Dandhya-Gharba dance was presented by Wentworthville batch youngsters. Yaksha Prashna, the wisdom of Mahabharata, was played by senior students with a spectacular composition in Sanskrit.

Hon B. Vanlalvawna, Consul General of India in Australia,  felicitated Albert Vella, President of NSW Federation of Community Language Schools, for his exemplary commitment to community Languages and receipt of Order of Australia Medal last year.

Mr Albert Vella spoke about the importance of learning ones mother language and commended the school for its efforts in promoting Sanskrit.
Mr Raj Datta addressed the audience and highlighted the significance of Sanskrit and Indian culture in the global environment.