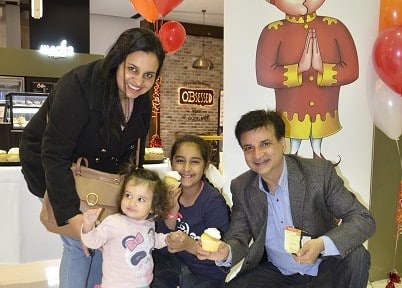 On Tuesday, Sydney Airport celebrated the third anniversary of Air India’s inaugural direct service from Delhi to Sydney, which has significantly boosted tourism and trade over the past three years.
We are celebrating the occasion with a social media competition offering two return Air India tickets to Delhi, as well as balloons and cupcakes at the airline’s check-in counter.

“India is our sixth largest international visitor market and one of our fastest growing markets,” Sydney Airport Managing Director and Chief Executive Officer Kerrie Mather said.
“Since Air India commenced its direct service to Sydney in 2013, the number of seats has grown from zero to 107,000 last year and Indian passengers have increased from 140,000 to more than 200,000 in the same period.
“I’d like to thank Air India for their contribution to boosting tourism and trade between our two nations, as well as offering passengers a quality product and great connectivity to and from India.
“I’d also like to acknowledge Tourism Australia, Destination NSW and Delhi Airport for the role they played in securing this important service for Sydney.”
As Australia’s tourism, business and economic centre with the highest number of residents with Indian ancestry, Sydney is an ideal destination for Air India and demand for the service remains strong.
“Over the last three years, Air India has brought Australia and India closer than ever before with the only non-stop service between Sydney and Delhi,” Air India Manager Australia Madhu Mathen said.
“This service also provides a gateway to Air India’s international network of 34 cities.”
NSW Minister for Trade, Tourism and Major Events Stuart Ayres said India is a key inbound tourism market for NSW.
“Air India’s direct service from Delhi to Sydney has provided greater opportunities for Indian visitors to enjoy the fantastic tourism products, experiences and events on offer in Sydney and Regional NSW,” Mr Ayres said.
“We look forward to continuing to work with Air India through our tourism and major events agency Destination NSW, to promote travel to Australia’s premier tourism and events State.”