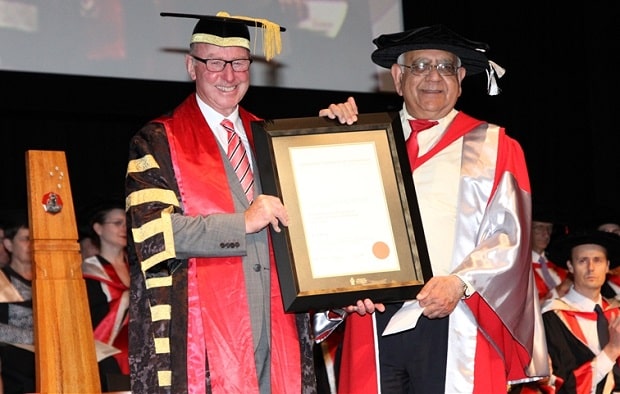 According to the Citation for the Graduation Ceremony Program, Mr Bhatia has contributed significantly to the use of high technology in Australia through founding of Primus Australia, and served as its CEO till July 2011. He developed the organisation from its inception into a highly successful and profitable facilities-based telecommunications carrier, generating over A$500m in annual revenue through organic growth and acquisitions. Primus became the fourth largest telecommunications carrier and the third largest ISP in an environment of dominance by Telstra.

The citation stated that Mr Bhatia led the development and commercial deployment of Australia’s first copper-based DSL broadband services. More recently, he was responsible for the roll-out of first release NBN sites in Tasmania and NSW. He also pioneered the development of bypass and override codes to introduce competition in Australia’s international telecommunications. He was responsible for development and deployment of indexable and searchable voice order recording systems that contributed a significant increase in productivity in the industry. Earlier, Mr Bhatia pioneered the use of inverse multiplexing to improve utilisation efficiency of international cable bandwidth for the internet.

Accepting the honorary degree Mr Bhatia said, “I am a student and not a day passes when I do not learn something new, be it in the fields of technology, science or management. I am truly humbled by the great honour bestowed on me by an august and a highly respected institution – Swinburne University of Technology, an institution with over 106 years of distinguished history and an institution that belongs to top 3% of universities of the world. I am tremendously excited about the future and we have many opportunities that lie ahead of us at Swinburne University”.

Mr Bhatia who completed his B.Tech in Electrical Engineering from Indian Institute of Technology, Delhi has more than 25 years of international experience in the telecommunications industry. He has worked in senior management positions with major global telecommunications organisations in the United States of America, Europe and Asia, including Siemens and OTC. He is a former member of Board of Directors of TIO and the Alfred Foundation, current President and former National Vice Chairman of Australia-India Business Council, and Convener of COSRA, a non-profit organization that is assisting international students in Melbourne. He is also a senior advisor to HCL.

Mr Bhatia strongly believes that advanced manufacturing, enterprise IT, higher education and advanced healthcare are areas of strength in which Australia has long experience and tremendous knowledge. According to him, “Some of these classical industries may no longer be viable in Australia for various reasons. However, I believe that we have the capability to create centres of excellence, elsewhere in the world, for such industries using our people, technology and management skills”.

Mr Bhatia also took the opportunity to congratulate all the international students who received their undergraduate and graduate degrees from Swinburne University. He thanked them for bringing their cultures to Australia, thereby enriching Australian society.

“Some of the international students may choose not to stay on in Australia, and I hope their education at Swinburne has endowed them with new skills and knowledge. I am certain they will take back with them Australian values of mateship, justice and a fair go,” he said.

In conclusion, Mr Bhatia thanked Chancellor Bill Scales, Vice Chancellor and President Prof Kristjanson and Members of the University Council for the honour, claiming that he will always cherish it and will try his best to meet the expectations of his alma mater.