Sustainability: Home of the future 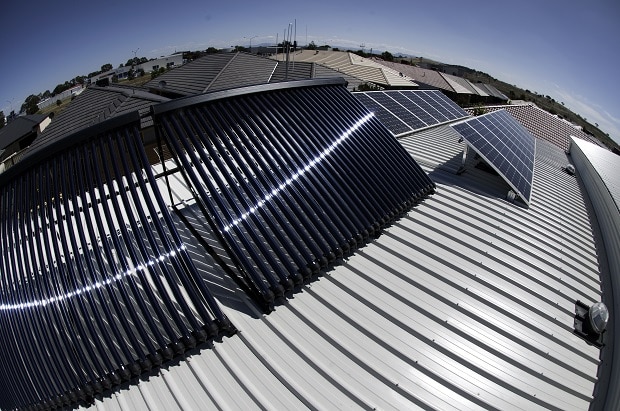 Ever thought ‘luxury and comfort’ and ‘health and sustainability’ are two mutually exclusive groups? I thought the same too, before meeting Sanjiv Gosain at his 9-star energy rated (ACT House Energy Rating Scheme) insulated concrete thermal mass house, which is beyond carbon neutral. The house is listed in the zero emission category, and produces enough clean renewable energy to supply all its operating needs. And the best part is that it is affordable too!
Recalling how he embarked on the idea of building a house like this, Sanjiv shares a personal anecdote about how his father-in-law gave his wife some ‘Vastu shastra’ (science of construction) notes when they were planning on building a house in Canberra. Based on those instructions, a plot of land which faces north with a water-body in front was most appropriate for constructing a house. But going by Australia’s geographical location, it was impossible to build a very high energy rated house on this. And that set him thinking. Being an engineer, the best thing for Sanjiv to have his wish materialise, was to adapt a technology that would help him.
“The technology didn’t exist at the time, so I decided to invent it, it’s as simple as that,” he reveals. And thus came a design with thermal walls, named ‘econ wall,’ which changed the whole scenario. “In terms of saving energy, the thermal mass property of concrete was utilised to absorb, store and release energy and that not only saved energy, but improved occupant comfort levels too,” explains Sanjiv. The proof of the principle comes from the fact that the home’s expected operation has been declared close to carbon neutral by Beyond Neutral, a specialist greenhouse, energy and environment-related service provider.
The home is airtight, unlike most of the Australian homes, to avoid uncontrollable air leaking, in line with the new mantra in building architecture which says to ‘build tight, ventilate right’.  Another interesting feature is the use of five layered insulated curtains with radiant barriers and layers of fabric which are used in snow jackets, that shuts out the outside temperature.
“Saving energy is not just about making alterations on the building, it is about personal discipline as well,” says Sanjiv. “Even with innovative design, construction, energy and water conservation facilities in place inside the house, the timely, wise decisions from the occupants will make all the difference. For instance, LED downlights light up the building and a lighting control system has been installed which can be controlled from an iPad, yet the decision to switch it off as you go to bed is yours”.
A passive solar design is used, along with the active one. The sun’s warmth is used to heat up rooms, with windows installed in the northern direction. As part of the active design, solar energy is absorbed in the roof’s solar hot water collector which is further circulated into the hydronic heating system. DC ceiling fans which use 40% less electricity than AC fans, are used throughout the building which can be reversed in winters to circulate warm air.
“Just like ears of the human body get cold first, the external elements of the building like driveways conduct a lot of heat,” explains Sanjiv. “Thus, many elements of the building like driveways, alfresco slabs and pergolas have been installed with thermal breaks to prevent heat from getting conducted to the house.  Even the awnings, gates, down pipes, solar inverters and lightings have been connected to the house using thermal break fasteners and the house has an insulated garage too,” he adds.
The design and construction of the building can be well localized too, in any part of a country like Australia with its varying climate zones. The high bushfire survival rating of the building makes it the answer to one of the burning necessities faced here.
In terms of affordability, Sanjiv believes the basic thermal mass walls will cost the same as brick veneer technology. Certainly it makes much more sense to build such a sustainable abode, than spending thousands of dollars to enhance your kitchen! The technology which has been used is very practical, and the numbered panels of the econ walls ensure that the construction can be done quickly.
The concept has been well received by Australia, and the accolades that the technology has received are an attestation to this. After becoming a finalist in HIA National Green Smart Product of the Year Award 2013 and HIA National Green Smart Custom Home Award 2013, the house went on to win the Master Builders Sustainable Construction Award 2013 and the prestigious Master Builders National Excellence Award for Environment and Energy Efficiency in 2013.
Sanjiv draws inspiration from award winning Indian architect Satish Gujral, who made Indian architecture take a new turn by building functional spaces that ignite life.“I believe it is in the carbon neutral housing that the future of the world resides,” says Sanjiv. Although a late starter in sustainable housing, Australia has made tremendous progress so far, thanks to the tightening of energy rating for houses. The next step is to create awareness about the option of sustainable living in an affordable budget, and the biggest push will come from the customer’s side. After all, who wouldn’t want to be comfortable and at the same time, stay safe?