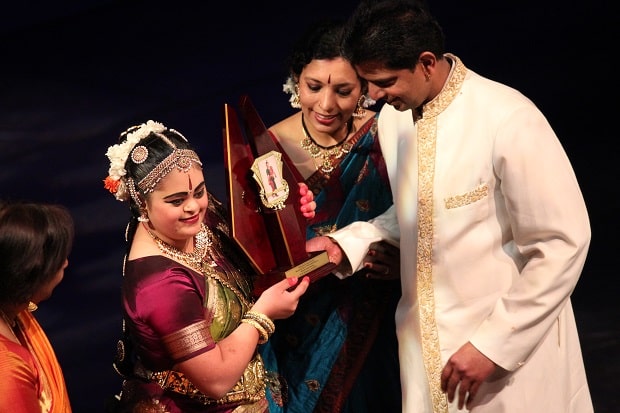 A young girl overcomes the challenges of Down Syndrome and delivers a flawless and inspirational performance, writes SAI NARAYAN

August was a momentous month in the lives of the Fielding family, as Shanthi Anita Fielding, aged 19, performed her Bharatnatyam arangetram (graduation in Indian classical dance) at the John Curtin Theatre in Perth, to an audience of about 300 people. Shanthi was born with Down Syndrome, a genetic disorder resulting in severe intellectual disability. She has congenital problems that require ongoing corrective surgery and management. Her disability is compounded by anxiety and panic attacks triggered at times when facing crowds of unknown people and stage lights. Given these disconcerting facts, her mother, Para Fielding and teacher Shobana Puganeswaran, founder and director of the Narthanalaya School of Indian Classical Dance, had a challenging task to prepare Shanthi for the arangetram. To their knowledge, no one known to be afflicted with Down Syndrome had ever done such an event!
Shanthi had studied for seven years under Shobha’s tutelage, and she would be a trailblazer to accomplish this. Letters of support poured in from the country’s leaders, including then Prime Minister Kevin Rudd, ex-Prime Minister Julia Gillard and Fiona Stanley, AC.
To find out what happened at the performance and also her story, Indian Link caught up with her mother Para Fielding and teacher, Shobana.
Indian Link (IL): What challenges did Shanthi face leading up to the performance of her arangetram?
Para Fielding (PF): Shanthi was initially enrolled in a mainstream school with a full-time aide to support her learning. However, she wasn’t making much progress, so we enrolled her in a specialist school. By nine, Shanthi’s learning was very slow, and she could hardly read or write. She started learning dancing then too, but it took a while and was a struggle to find the right teacher until we found Shobana, who was also happy to take her on. Initially, she worked one-on-one with Shanthi, but later put her in the group classes with other children. Shanthi liked the group classes because she could watch the others and found it more stimulating.
Because of her condition and medications, Shanthi struggles to sleep. Though she has been learning Bharatnatyam for seven years, the real learning time is much less, because of her regular hospitalisations. She has anxiety and panic attacks.
Shobana Puganeswaran (SP): During one of her practice performances at the temple, Shanthi had a ‘shutdown’ and lost track of all the moves. It could have been because she was performing in front of unknown people and because of the stage lights. We worried about she would perform on the arangetram day, as she has problems processing emotions. In her dance, she had to portray the navarasa, or nine emotions.

IL: How did this momentous event come about?
SP: Shanthi is absolutely passionate about dancing, and her has gone against all odds to learn the art. There was also complete trust in her guru, exemplifying the ‘guru-shishya’ tradition of surrender to the guru. Seeing this complete trust, I felt I had to reciprocate. From the start we had a great chemistry and Shanthi considers me as the ultimate teacher who knows everything about dance. I would write out her mistakes in a little notebook and give it to her. Shanthi would keep it with her all the time and the next day she made sure that the mistakes were rectified. Another interesting aspect is her phenomenal memory when it comes to dance. With the other dance groups, I would have to record a video for them to remember the moves. However, with Shanthi’s group, I never needed a video. She would remember every move I taught and the other children in her group would look to her to lead. She has a complete focus with dance, to the exclusion of all other distractions. This single-minded focus set her apart.

IL: What challenges did you face in teaching her?
SP: Though Shanthi is 19, her intellectual level is that of a 5 or 6 year old. Making her understand the complexities of Bharatnatyam was a challenge, and I had teach at her level. She could sometimes go ‘blank’ and shutdown. Shanthi would hardly make eye-contact with people but as expression is conveyed through the eyes in dance, I had to constantly exhort her to look up and make eye contact. I had to learn and improvise new teaching techniques for her. In teaching Shanthi I learnt a lot, and derived immense satisfaction and enjoyment.
PF: Shobana stretched the boundaries in her teaching. She thought out of the box and challenged Shanthi to perform at the same level as any other student, which pushed her to perform well beyond expectations. Shobana’s patience is another remarkable attribute. Not once did she raise her voice or lose her temper. Even at specialist schools for disabled children, I have seen teachers scream in frustration.

IL: Did you face criticism for arranging this arangetram for Shanthi?
SP: A dance teacher warned me not to take on this challenge. As Shanthi’s arangetram was the first from my dance school, she told me that I would lose prestige if Shanthi were to fail on the night of the event. Shanthi is possibly the first ever in the world with Down Syndrome to perform an arangetram. However, I went ahead, after getting her techniques reviewed and approved by my guru PT Narendran. When we can have the Para-Olympics for disabled athletes, why shouldn’t a disabled person being able to perform an arangetram? Shanthi has the full repertoire of dance techniques and that is what an arangetram is all about.

IL: How did the arangetram go?
SP: Most students are tense before the performance and adjust their make-up or drink water. When we asked Shanthi whether she was tense, she just said, “No, I am happy!” She gave a flawless rendition. I completely forgot about the crowds and was immersed in watching her. There was a standing ovation and many in the audience had tears in their eyes.
PF: She gave a thank you speech at the end of her performance, pushing her brother away when he wanted to help, she was so confident in her own abilities! The doctor who has been managing her condition for the last nine years said, “She is my hero”.
Jeyarama Sarma (SP’s father): What happened was nothing short of a miracle. In her dance, she forgot herself, she forgot her anxieties, fears and disabilities, the crowds and stage lights. It reminded me of Vivekananda’s story when Ramakrishna touched him, he forgot the world and had a spiritual experience.

IL: What implications does Shanthi’s success have for others with a disability?
SP: I believe this arangetram is an eye-opener for many people on what is possible. Shanthi’s performance is an inspiration, and shows the way for others with similar disabilities. Even for people without a disability, it is inspirational to how much children can do if they push themselves.
PF: Every family knows someone with a disability. In a lot of cases, the disabled person is not allowed to develop or grow. Shanthi’s arangetram could at least start a dialogue process to discover what is possible. If the arangetram sends out this message, nothing would give me greater pleasure! Some families from the Down Syndrome Association attended the performance. Though they were from different cultures and backgrounds, they sat through the event and appreciated it. A little girl with the same condition was following the dance movements with her hands and feet, trying to copy them. She might also learn dance and follow in Shanthi’s footsteps.

IL: And what does Shanthi herself have to say about her dancing?
Shanthi feels happy and excited about dancing to the gods. In her own words, she exclaims, “I am a superstar!”

“No pessimist ever discovered the secret of the stars, or sailed to an uncharted land, or opened a new doorway for the human spirit,” are words by Helen Keller, which never rang more true. The optimism of Shanthi’s mother and teacher, as well as her own passion and hard work has brought about a miracle. Shanthi Fielding’s arangetram and personal journey is a beacon of hope with the inspiring message of boundless possibility for all humans.