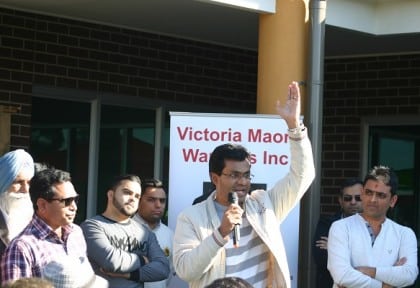 Residents come together and work more effectively with the police for a safer Wyndham. PREETI JABBAL and RAJNI ANAND LUTHRA report

Imagine this scenario.
You hear the garage door open at 4 am, and see 5 youths outside. You shout at them, but it does not scare them off. They begin to kick the entry door into your home, but you stand against the door and hold them off as you call police. You hear more boys outside; they are taking the fly screen off the toilet window. Police come just in time.
Or this one.
You wake up in the middle of the night to sounds in your front yard. You look thru the curtains to see four young men taking the tyres off your car. You shout and threaten to no effect, and ultimately get out there with a baseball bat in your hand. They leave, but shout that they will be back.
These are but some stories shared on a WhatsApp group formed in Melbourne’s west by residents sick of the recent break-ins and carjackings.
Members of the group Wyndham Crime Stoppers also share information on suspicious activities around their homes, rush out to help when someone raises an alarm, and advise each other on safety and security equipment and simple procedures to adopt at home.
It’s working.

“We haven’t had an incident this past week,” Safwat Ali Khan, Truganina resident and founder of the group, told Indian Link. “Looks like the offenders know now that we have banded together, and will come out to support one of ours even in the dead of night.”
According to Crime Statistics Agency, the Wyndham area saw an increase in offences by over 19.8 % between 2105 and 2016 with figures recorded in the year to 31 March 2016. CSA figures also revealed that offences committed by people under the age of 25 increased between those time periods, in Wyndham.
Local residents were even more concerned after a spate of burglaries, home invasions and carjackings were reported in recent weeks, including many that involved members of the Indian Australian community.
The police maybe minutes away but neighbours are at arms’ reach, one of the early posts says.
Only days later, a call goes out as someone feels insecure, and about half a dozen messages pop up: We’re coming over.
There’s an alarm going off on my street
My neighbour’s garage door is open, what should I do
Police in my street, with lights flashing…
Suspicious car in my street driving slowly and stopping at every house … four youths in, think one of them has a camera he is pointing at the doors….
Posts appear thick and fast, and sensible advice is offered.
I’m coming over now
Call the police
Take a photo
How did the idea come about, we ask Safwat.

“When these incidents began to happen, I figured we needed a way to connect people so we could alert each other if there was something suspicious around us. I started it with a few names in my own contact list, and within 48 hours we had reached capacity, with 256 members from Tarneit, Truganina, Point Cook, Williams Landing. A second group had to be created, and a dedicated Facebook page of the same name, which now has 1200 numbers.”

Meanwhile another group was formed in neighbouring Tarneit by Rishi Prabhakar called Tarneit Security Watch and was filled straight away.
“Generally our idea is, if you see anything untoward, first call the police and then alert members. There are some guidelines as well, such as not to mention race of the offenders,” Safwat revealed.
Are they patrolling the streets?
“No, we are not,” Safwat reiterated. “We are working with the police simply as a neighbourhood watch.”
Safety measures are discussed: install surveillance cameras (with many posts suggesting where to buy, where the good deals are and who can install); park cars in the garage; don’t leave garage openers in car; place garbage bins in front of garage doors; learn self-defense; keep lights on; don’t leave keys on benchtops; install panic alarms; maybe comply with intruders but observe everything about them.
Also, a host of other issues, such as how to approach the authorities, politicians and media; what a citizens’ arrest means; what safety measures are legal, and how to record evidence.
Community safety meeting
One of the outcomes has been a community safety meeting recently. Over 200 residents attended the meeting that was held at Grow N Learn Child Care in Tarneit.
According to Rishi Prabhakar from Tarneit Neighbourhood Watch group, who initiated the event, there is a real need for residents to come together and work more effectively with the police to maintain security at a local level.
During the safety meeting the biggest outrage was over the lack of resources and disproportionate number of police officers in line with the rapidly growing population of Wyndham. There was a strong demand for the local council and authorities to expedite the installation of CCTV cameras and lights in black spots and public areas.
Other suggestions included a need for Wyndham Police station to operate on a 24/7 basis and change to be effected to laws and legislation to offer stricter penalties for perpetrators particularly teenagers and juveniles.
Petition
Another outcome has been a petition that has been put to the authorities in Parliament and State Police.
It appeals to the Attorney General to reinstate “the Bail Law with tougher conditions for repeat juvenile offenders and strop the lawlessness”.
Some 3200 signatures were garnered from railway stations and shopping centres.
Just before this report went to press, the Facebook post read:
Good news… Some assurances for more police numbers in Wyndham soon as state government have announced 300 extra police this year’s budget.
More police for Wyndham were announced too, as well as “75 arrests with curfew on these young kids”.
A safer Wyndham
Safwat has always been community-minded. In 2014, he contested the state election as an Independent from Tarneit. Much of the same concerns drive him now. Having lived for 15 years in more developed areas of Melbourne, he moved to the area in 2013 and seems to have embraced it whole-heartedly as home, ever since.
He works as a real estate agent and his family includes his wife, two daughters and his parents.
“We haven’t had an incident ourselves in our home, but we know many in the area who have been victims. Look, we don’t want to have to come home from work and seek out the bat as a weapon instantly. If this is the most livable city in the world, shouldn’t it be a safe place as well?”