Statue of Unity divides a nation 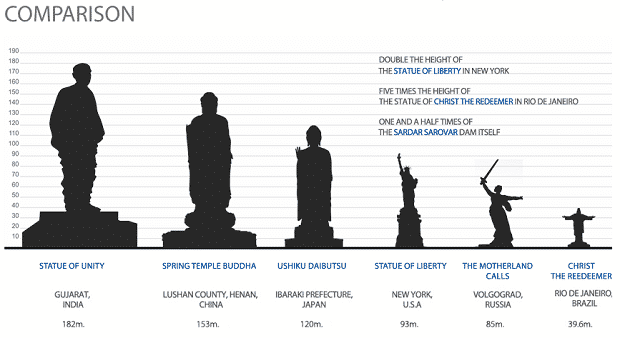 In a move widely seen as an attempt to break the influence of the rival Nehru-Gandhi political dynasty, Prime Minister Narendra Modi has set aside $33 million (2 billion rupees) of government money to help fund the construction of the tallest statue in the world. The “Statue of Unity” will serve as a tribute to Sardar Vallabhbhai Patel, the first home minister of post-independence India who was dubbed the “Iron Man” for his contribution to uphold the country’s integrity.

This nationalist symbol aims to tower over its architectural rivals all over the world and is set to dwarf the Spring Temple Buddha in China and the Statue of Liberty in New York.

The total cost of the project, estimated at almost $340 million, was initially to be funded by the government of Gujarat and by public donations. The announcement that the federal government would also support the project sparked a furore around the necessity of the large expenditure.

While many believe the statue would be a global tourist attraction and would serve to bolster the economy, critics of the plan commented that this year’s budget allocated more money for the statue than for women’s safety nationwide (1.5 billion rupees) or the education of young girls (1 billion rupees).

The federal government’s financial support has also received backlash on social media, with one Twitter user saying the move would lead to the collapse of the economy.

The statue will be built on an island in the Narmada River in western Gujarat state, where Prime Minister Narendra Modi was chief minister for more than a decade. The project has enlisted the assistance of Turner Construction, the US-based company behind the world’s tallest building, the Burj Khalifa in Dubai.