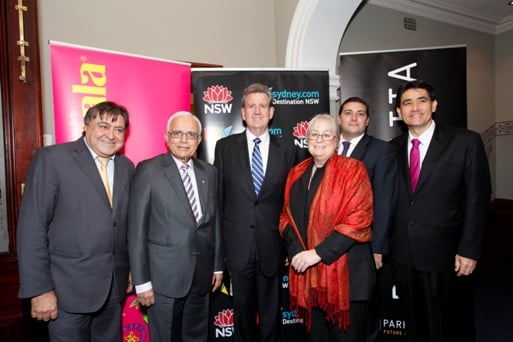 So the rumours are true! Shahrukh Khan, Bollywood’s most loved personality, is due to come to our shores for Parramasala.
There was much buzz about this, with the Indian Link office taking a few calls by fans who wanted to find out if this was true. The authorities when asked until last week were tight-lipped, giving us the feel that something was abuzz.
Apparently, SRK was asked, and the Sydney authorities were waiting for him to get back to them.
So, get set for SRK, Sydney!
The mighty King Khan will be here for Parramasala 4-7 October, the Premier of NSW Barry O’Farrell announced today.
He will headline a two-hour Indian variety show of music, dance and comedy – Temptation Reloaded as part of the Festival.
Parramasala is NSW’s arts and culture festival centred around Sydney’s South Asian population which was launched two years ago. It includes free concerts and performances, exhibitions; food and handicrafts markets, and a communities stage.
While it started off with much promise, last year’s event was decidedly lacklustre, and no doubt the message was brought home loud and clear that a ‘celebrity’ was needed to infuse more enthusiasm.
Well, who better than SRK to bring in the bums on seats!
Mr O’Farrell observed at the announcement on July 31, “Shahrukh Khan’s show will attract an audience not only of Indian origin, but will also appeal to his fans overseas including Fiji, Singapore, Indonesia and Malaysia. In addition to international visitors, we are also expecting SRK and the Temptation Reloaded show to attract more than 5,000 people from Sydney and interstate”.
“Temptation Reloaded offers a unique cultural experience and it is a great event for Western Sydney with many hotels and restaurants expected to reap the tourism rewards,” Mr O’Farrell added.
SRK’s popularity is not lost on the Premier, a twitter fan himself, who could not help noting that “Shahrukh Khan has more than four million Twitter followers and is one of the most popular and influential Bollywood actors”.
SRK will no doubt be a coup for Dr Hari Harinath, Parramasala Chairman, who has been looking at ways to make the event more profitable since taking over last year.

Temptations Reloaded will be held at Allphones Arena Homebush on Monday 7 October.