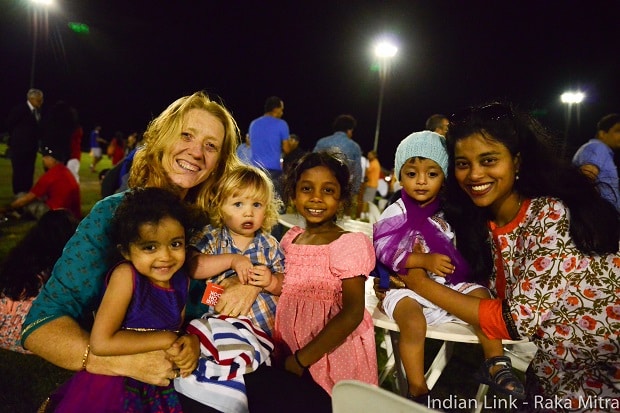 Reading Time: 3 minutesThe Diwali lights shone this year in many different parts of Sydney with multiple celebrations in the Hindu festive season

Gone are the days when the mega annual Deepavali Fair provided the sole opportunity to celebrate the Festival of Lights. Diwali fairs cropped up this year in smaller affairs at other pockets of the community, enabling revellers to share the festive spirit closer to where they live.

Primary among these smaller events, and by far the most successful, was the event in the Hills District. Organised by the Australian Indian Cultural Council Inc. (AICCI) in its maiden venture, the Diwali Fair at Cherrybrook’s Greenway Park took everyone by surprise with its excellent coordination. Its carefully planned program for both children and adults, food stalls, business stalls and some brilliant pyrotechnics at dusk, ensured that it all went off with flying colours. With a footfall of some 5000 people, the organisers must be deservedly delighted.

Prime Minister Tony Abbott sent through a video message, while other politicians such as Philip Ruddock, Matt Kean, John Robertson, Geoff Lee, Mayor Steve Russell, Deputy Mayor Gurdeep Singh and Cr. Ryan Tracey showed up in person, with Kean and Robertson even choosing appropriate Indian attire! Hope they all had their fill of Diwali mithai…

In contrast, the Diwali Fair organised by the Council of Indian Australians (Inc) at Lakes Edge Park in The Ponds, was a much smaller affair. Another debut venture, it appeared that somewhat less thought had gone into planning and execution. Footfall was visibly restricted, about 1000 perhaps, and the food and business stalls seemed relaxed. The cultural acts were also few in number, but all the better for the artists, who each got an extended time to strut their stuff. In fact, the smaller crowds actually worked for those who wanted to network with the politicians and other invited dignitaries, and personally offer greetings of the season.

At the corporate level as well, Diwali has for the past few years become an opportunity to felicitate Indian members of staff as well as those in the client base, and the Indian community in general. Westpac this year chose again to host their do at Harris Park, the ‘epicentre’ of Indian settlement in our city. With the gathering being a good mix of clients, employees and management, Westpac took the opportunity to show their involvement with the Indian community in Australia.

Damien MacRae (General Manager, Westpac Premium) surprised everyone with his address starting in Hindi as he introduced himself, very similar to how he welcomed guests last year. He spoke about the desire for Westpac to engage more with the Indian community and about their bilingual staff in many of their branches. Ross Watts (Regional General Manager, Western Sydney), took up the theme of building a strong presence in the Indian community in his jurisdiction. He spoke about the aspirational desires of the migrant Indian community and how Westpac can help them across various banking needs. While both Damien and Ross complimented the various Indian staff members, they singled out Suraj Kapila, Bank Manager, Blacktown, who won the Alfred Davidson Award for the financial year 2014. This is Westpac’s Top Honour for the best 1% of its employees; Suraj was the highest rated Bank Manager in NSW.