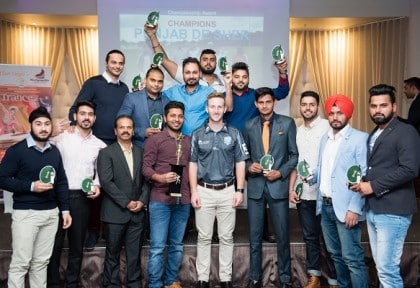 A night of celebration at ISC awards night

Rapturous applause and cheers rang out at the recent India Sports Club Award Presentation Night as Peter Nevill, Australian Test wicketkeeper and batsman, stood alongside other dignitaries to hand trophies to the award winners of the Winter Cricket Competition and Badminton Tournaments.


Sydney non-profit India Sports Club (ISC) was founded in 2002 with the aim of promoting community sports, mainly cricket and following that success, has widened its scope to include other sporting activities like badminton and table tennis which are popular with the Indian sub-continent community.
The ISC Winter Cricket Competition, which debuted last June, was highly successful, and this year saw participation grow with nine teams taking part.
Raj Natarajan, President of India Sports Club welcomed the audience to event. He described the journey of ISC in a nutshell and explained how, “The tournaments aim to help bring communities together.” He highlighted the efforts of the club to facilitate enhanced sporting links between Australia and the rest of the world, and the Indian subcontinent in particular. Natarajan thanked the patrons for their unwavering support of the club, and representatives of various cricket and sporting associations for their guidance.

Dr Geoff Lee, Member for Parramatta, Dr Hugh McDermott, Member for Prospect and Jodie McKay, Member for Strathfield were in attendance and congratulated winners.
President of United Indian Associations (UIA) John Kennedy, S K Verma, representative of the Indian Consulate in Sydney and officials of Cricket NSW were present and addressed the occasion.
The venue erupted in cheers and applause as the names of the winners of the badminton competitions, held at Sydney’s Olympic Park, were called out to receive their trophies.
The noise grew louder as cricket man-of-the-match awards, best batsman and bowler awards as well as winners and runners-up awards were handed over to the ecstatic players. The subcontinent passion for the game of cricket was very evident in the enthusiasm of the players.

The on-stage interview with Australian Test wicket keeper Peter Nevill, conducted by Raj Natarajan, provided an insight into the disappointing performance of the Australian Cricket Team in the recent test series against Sri Lanka. The point of contention in that Test Series was the sneaky stumping by Nevill of Dimuth Karunaratne on day four of the Colombo Test Match, which Nevill defended. He did not agree with the suggestion that it was contrary to the spirit of the game.
The Victorian cricketer recounted his debut at Lord’s Cricket Ground as one of his fondest memories. His seven dismissals was a record for a wicketkeeper on Ashes debut. The gloveman further predicted that Australia will bounce back to the number one spot in Test rankings in the near future.
Nevill’s witty answers during the Q&A session and on-stage vibrancy had the audience enthralled. Cricket fans were in for more treats when it came to selfie time with the celebrity cricketer and an autograph signing session.

ISC announced the launch of its summer cricket competition starting in the second week of September. The event reinforced ISC’s commitment to strengthen the evolving multicultural society of Australia through the medium of sporting activities across Sydney.
In 2015, ISC became a member of the Mosaic Cricket Association, a Cricket NSW initiative, through which it would like to fulfil its long term vision of seeing some of the boys and girls trained by ISC represent NSW, and then the Australian national teams. The Club also has plans to introduce Australian football in its list of games.
- Advertisement -
Share
WhatsApp
Facebook
Twitter
Linkedin
Previous articleLiving the ice-cream dream
Next articleExploring new education opportunities