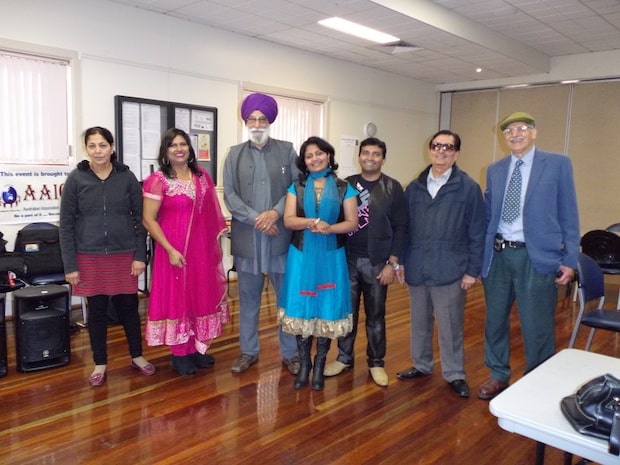 Reading Time: 5 minutesLively Independence Day celebrations among the older members of the community

Fiji Indian Senior Citizens Association turns 15!
FISCA recently celebrated its fifteenth anniversary with great pomp and show at Bayswater Primary School.To initiate the celebrations, President Liladhar (Jerry) Jeraj welcomed fifty plus members and invited guests to the evening. He praised financial support Victorian Multicultural Commission and City of Knox provided them over the years.
Mrs Satwati Nath, wife of late Sheo Nath, founder of FISCA, presented a brief outline as to how, in the year 1998, FISCA came into being. Satwati created nostalgia when she reminisced about how she and Sheo would attend an Indian Seniors group, were impressed by it, and came up with the idea of opening an association for Fijians of Indian origin as well. Sheo Nath consulted Marjory Lapworth, when both were installed as Honorary Justices of Peace in 1998, and other councillors of the City of Maroondah, and in 1999 formed the association. Treasurer Ram Vilash, 2004 to 2012, related how in 2004 FISCA was registered and became qualified to receive the VMC grants.
FISCA provides entertainment, information, and necessary advice, in a friendly environment. Mr and Mrs Pooran Lal, members since FISCA’s inception, donated $300 toward the costs for the evening. These seniors also sang one of their favourite duets “sau saal pehle mujhe tum se pyyar tha, aaj bhi hai aur kal bhi rahega,” their laptop providing karaoke music. Vikashnee, fifteen, performed a well-rehearsed Bharatnatyam dance.
President since 2005, Jerry thanked members for their support during his tenure and reinforced that no matter how good office bearers may be, member attendance and support are what run associations. FISCA, Jerry sad, is possibly the only senior association in Victoria that celebrates the festivals of all major religions—Buddhism, Hinduism, Islam, Christianity, and in 2014, invited a member of the Bahai faith to talk to about their beliefs.
Members sang the Indian anthem, and also the Fijian farewell song – Isa lei. Wine and delicious Indian food, catered by Fiji Café in Dandenong, was served.
For more information, please contact Jerry on ljeraj@optusnet.com.au.

Indian Seniors Forum celebrated India’s Independence Day at Shirdi Sai Mandir, where members greeted each other and sang India’s national anthem with great enthusiasm. Some senior members reminded the rest of us of the hardships and torture our ancestors suffered when fighting the Quit India war against British occupiers. In their Clayton meeting hall, the Forum celebrated the festival of Raksha Bandhan in which members Vinni Rao, Coomi Patel and other ladies tied sacred threads to the gentlemen’s arms and performed puja. The sacred thread was also tied to the Deputy Mayor of the City of Monash’s arm as he attended the meet, and a puja performed, a ritual that appeared to thrill him quite a bit, and he assured the Forum of all possible support. He also presented a letter of appreciation. For information, please contact Chief Coordinator S. K. Auplish on auplishsk@yahoo.com.au.

Songs of yesteryear
Indian Seniors Association West (ISAW) held their Independence Day meeting at Errington Community Centre in St. Albans, which about forty members attended. They enthusiastically sang the Indian anthem and many other patriotic Bollywood songs of yesteryear.
Members related their personal experiences as to what they did before India gained her independence, and particularly described what they did on the day itself.
Home-made food members brought along was happily shared with all, and Indian mithai added gusto to all the fun.
For information, please contact President Arjan Tuli on arjantuli@bigpond.com

The City of Stonnington meet attracted forty-three attendees; double that of the previous month. Coordinator Jaya Manchikanti expects many more in future meetings since the venture has been announced in Indian Link.
The spirit of the day was typical of Independence Day, with repeats of Jai Hind! Abrar Husain, from Jammu & Kashmir; not-a-senior by a long yard, in his rich voice sang a Manna De patriotic song: “ai mere pyare watan, ai mere ujre chaman, tujh pe dil qurban”.
Coomi Patel, Rupal Desai and Mrs Sharma sang the National Anthem and also: “ai mere watan ke logo, zara aankh men bhar lo paani”, among a few Bollywood patriotic songs.
Dr Nisha Bhatnagar asked members to briefly introduce themselves to the others. While Subramanyam came to Melbourne as student in 1953, went back home, and returned as a permanent citizen, Ravinder Singh, from a village in Punjab where actor Dharmendra originates, has only been here for a few months old. He had many photographs with Dharmendra he shared with us.
Cheese sandwiches, onion pakoras, Indian mithai and fresh fruit was supplied by Shiva restaurant in Hawksburn.

Suggestions have been extended that this as yet un-named group is granted formal recognition as an independent association, which Jaya is presently working on. At the moment, she calls everyone individually to advise them of future meetings. If the new project eventuates, she has her work cut out for her.
Jaya may be contacted at jmanchik@stonnington.vic.gov.au

Kingston Indian Senior Citizens Association (KISCA) also celebrated India’s Independence Day and chanted Jai Hind. At their Annual General Meeting this month, they elected Ashok Jamini as Vice President, as the elected VP is available no more. Asha Jamini, Ashok’s wife, a highly proficient ex-Secretary, is now a Committee Member.
For some time, ten thousand Indians and Fijian Indians have called the City of Kingston home, while up to fifty thousand may call the City of Dandenong home. If KISCA is to flourish, it needs more members, an eventuality that has more chances of coming alive if the organisation moved to Dandenong, which has been on cards. Since a very small membership attended, the discussion of the change has been postponed until the next meet.

A multicultural affair
Indian Senior Citizens Association (ISCA) celebrated Independence Day and Multicultural Day together at Mt. Waverly Youth Centre. President Prem Phakey greeted members on India’s big day, and all sang both India and Australia’s national anthems.
After a few announcements, Dr Phakey briefly spoke about yoga, light exercise, sing-songs and basically the good time members have at their Friday program. He thanked VMC and the City of Monash for generous grants to make such events possible.
Vice President Jasbir Bedi, MC, invited Priya Kulkarni to give us a Bollywood dance. Then came Nakita, Priya’s sister, who also gave a Bollywood dance, and then both of them together.
A Chinese troupe from Jasmine Dance Group, attired in silky costumes, with pre-recorded Chinese folk songs on differing themes performed three Oriental dances. The most enchanting though was when they raided the floor and requested advice and lessons in comparatively vigorous, fast and eye-catching Bollywood dancing. During this period, entrée was served on tables.
Jasbir invited Hon. Alan Griffin, Hon. Michael Gidley, Mr Chin Tan and Cr Stephen Dimopoulos respectively to address members, who all praised ISCA’s program. A few sari attired ladies presented token gifts to the VIP speakers. Mr and Mrs Raizada gifted $900 toward ISCA’s outdoor activities. VMC Chairperson Chin Tan pledged a generous grant for the forthcoming Diwali function.
The dignitaries present were VMC Commissioner Srini Srinivasan, Ms Yang, representing the Honourable Anna Burke, and various MLCs. Veg and non-veg buffet lunch was served.