Soaking in the spirit of Diwali 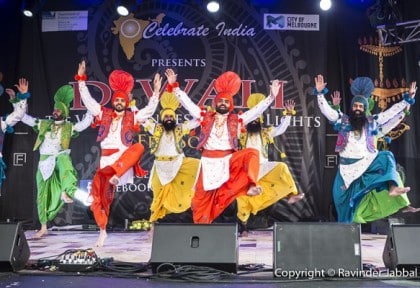 The skies turned ominous and the winds were biting, but the crowds pressed against the security barricades at the Federation Square Diwali Festival lost none of their enthusiasm.

The weather was bad but the mood was jubilant at this well-patronised, huge and much-anticipated open air celebration. This year rain and heavy winds may have affected the overall number of festival attendees however Festival organisers did everything in their power to ensure that the event went on.
Celebrate India Inc committee’s painstaking plans narrowly missed being rained out as the weather conditions improved towards the evening and many people braved the elements to enjoy the festival offers.  “I am always amazed and thankful to see how loyal people are to this event,” said Arun Sharma, Chairman of Celebrate India Inc. “Rain or shine they still come armed with umbrellas and raincoats and soak up the festive spirit. It makes the whole effort worthwhile.”

This is the 11th year since Celebrate India initiated its first Diwali celebrations in this iconic public space to share the joys of this major Indian festival with the broader community. In the lead up to the event, a formal launch was hosted at AFL House where the Festival program was announced amidst much fanfare. Guests got a glimpse of the diversity and tradition associated with Diwali through the cultural segment presented that evening with a promise for more.

It turned out to be a promise well kept, as over 200 artists both professional and amateur, presented a variety of cultural performances throughout the main event. The carefully planned schedule, including 93 items, had to be adjusted to make allowances for the vagaries of the weather. A common sense of identity and community imbued the atmosphere as Melbournians enjoyed the eclectic mix of guitar, tabla, folk songs, dances, magic, yoga and meditation.

Food proved to be a key part of the agenda for visitors, many of whom travelled from across the state to meet with friends to enjoy delicious cuisine, such as samosa chaat, kulfi and chole bhature. With wonderful Indian sounds playing along the Yarra, visitors seemed to be largely pleased with the array of cultural activities accompanying their meals, such as henna, an ancient floor art display rangoli and an exhibition of the unique Pichhwai paintings by national award-winning Rajasthani artist Trilok Soni.

The beautiful traditional lanterns strung together to decorate the marquees fluttered crazily in the wind but remained mostly intact. Much attention was also attracted towards a massive rangoli made out of fruits and vegetables that apparently took the volunteers three hours to complete. All the vegetables were later donated to the Food For Life program.

Audience participation was engaged through the mass swearing of the White Ribbon Oath led by Arun Sharma and his wife Jaya. The oath is taken to never commit, excuse or remain silent about violence against women. The AFL players and crowd collectively took the oath making a commitment to lead by example, to be a role model and to intervene safely when needed.

On a less serious note the audience actively and vocally joined Celebrate India in singing their anthem that was telecast live to seven continents across the world including southernmost Antarctica.
The formal part of the evening was taken up by speeches from dignitaries and lighting of the traditional Diwali lamp. Addressing the crowd with the greeting “Shubh Diwali” in Hindi, Robin Scott, Minister For Multicultural Affairs kept it brief. He referred to the symbolic concept of triumph of light over darkness and celebration of all that is good, of empathy, love and respect.

“It is a feat of knowledge over ignorance and the celebration of a spirit that lies in the heart of our multiculturalism, our diversity and our success as a community,” said the Minister.

During the course of the evening several winners were announced and generous prizes given for excellence in Sing for Diwali, Dance for Diwali and Diwali Essay Competitions. Kaavya Kumaran (under 12) and Chondryma Chakrobortti (over 13) won the singing competition whilst Dancing Divas (under 12) and Bindaas Bollywood (over 13) took home the trophies for dancing. Eloise Driver from Bacchus Marsh Grammar won two tickets to India for her essay on what makes India and Australia truly multicultural nations. Her school also won a 6-week AFL-Leadership Program for submitting 200 entries to the Diwali Essay competition.

As a downside, the food and market stalls experienced less footfall in comparison to previous years due to the inclement weather. Festive spirits, however, soared again with the spectacular fireworks display on the banks of the Yarra. The pyrotechnics lit the city skyline as thousands watched the action from afar. The sparks burst in myriad colours and shapes before eventually disappearing and prompting the crowd to head back home.

Diwali or ‘Deepavali’ in Sanksrit means a row of lamps and symbolises unity and togetherness – an amalgamation of small demonstrations of ethnic practice into a single spectacle of Indian cultural expression. Bringing together not only South Asians but also Australians and those from other cultures, this year’s Victorian Diwali Festival held at Federation Square proved once again to be more than just family friendly, alcohol-free entertainment.

Both new migrants who recently arrived in Melbourne and seasoned visitors voiced their appreciation for the opportunity to experience such examples of cultural expression, pleased to celebrate such a historic and significant festival with others from within the community. No doubt many will be back next year to celebrate Diwali again. Hopefully the weather will cooperate.