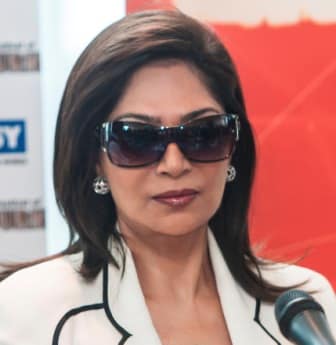 Simi Garewal delivered the Australia-India Institute’s (AII) Satyajit Ray Memorial Lecture on May 7 at the Elizabeth Murdoch Building in the University of Melbourne. The Institute’s several thought-provoking lectures throughout the year attract but a sprinkling of Indian-Australians. Ms Garewal’s talk, however, attracted a full South Asian audience, and no marks for guessing why!
Ms Garewal spoke about the evolution of women in Hindi cinema. She began by recounting her own experience arriving in Mumbai as a 15 year old from the UK – probably in the 1960s – with the express intention of acting in Bollywood movies. Holed up in an apartment in what was then Bombay, she set out to educate herself by watching contemporary Hindi movies. She said it was a steep learning curve, as not only did she find herself having to learn Hindi, she went through a process of acculturation, trying to find out what roles women could do. At this point, Ms Garewal showed some clips from the sort of scenes she watched in the most misogynistic of movies from the 1960s, in which women were little more than doormats, who treated their men like Gods and were in turn treated no better than serfs by their menfolk! She drove home the point that women generally played self-sacrificing roles, with ‘each tear that they shed ..making money at the box office’. She said that India was a patriarchal society (surprise, surprise!) with women portrayed in ways that fitted with male fantasies of what they should be like. She argued that even lyrics from movie songs exhorted women to ‘worship their husbands’ and ‘tolerate oppression’.
Ms Garewal argued that Bollywood cinema was a powerful medium and could have changed the way women were treated and viewed in Indian society! Sadly, they chose not to do it. For her part, she said she acted in merely 55 films – and waited long for movies that did not portray women badly. Raj Kapoor and Satyajit Ray were two directors who offered totally different roles than the ordinary, which Ms Garewal enjoyed doing. She relished the quite ‘negative’ role she played as a woman in the movie Karz, for which she later won an award; and her role as a courtesan in the Herman Hesse cult movie Siddhartha.
Talking about contemporary women and movies, Ms Garewal argued that Bollywood cinema does disservice to Indian women by continuing to portray them in straitjackets when in real life women have come a long way and are doing a range of fantastic things, achieving great heights in their chosen vocation and career. By and large Bollywood continues to cast women actors in the same roles – for she believes that is what the bulk of the male audiences wish to see, and the box office panders to their taste.
Ms Garewal hailed the recent Vidya Balan movie Kahani, which, for the first time, celebrated the modern Indian woman as she really was. It had taken, she said, 250,000 films and 100 years of Indian cinema to get there!
Ms Garewal’s point was that Hindi cinema did not do justice to the Indian woman; however, the way in which it was rendered – including the choice of film clips shown and the explanations that accompanied it – made many in the audience come away with the impression that the Indian woman’s lot has always been, and still is, the worst in the world, and that there is a very special kind of misogyny in India that is beyond anything other cultures have seen!
Ms Garewal cut a suave figure in her white pants-suit and spoke stylishly. But for those interested in a serious discussion of women in Hindi cinema, they should read Mukul Kesavan’s wonderful and thought-provoking essays and articles.