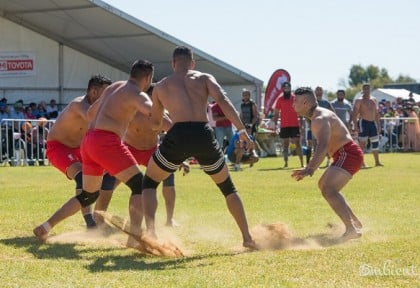 It was a great showcase at a recent girls’ netball competition. The final match, at the end of three days of competition, Sydney versus Perth Sikh Swans, turned out to be a gripping game, drawing a huge crowd including supporters from both cities.
In the end, the Sydney team pulled it off, showing their experience playing as a team. Yet both teams, made up of Sikh girls, had put on a wonderful spectacle for the crowd.

Meanwhile, the hockey final between Malaysia and Sydney was just as intense. Malaysia scored two early goals before the half-time whistle. Sydney came out attacking from the get go in the second half finding an early goal, two minutes in. But they couldn’t find that equaliser, battling hard against a very talented Malaysian side.
The players were participating in a three-day sporting extravaganza organised by the Sikh community of Australia.
This year marked the 30th successive annual Australian Sikh Games, held in Adelaide over the Easter long weekend from 14 to 16 April.

More than 1,700 players from across Australia, Singapore, Malaysia and New Zealand participated in the games, making it one of the largest in recent years.

Over 40,000 spectators attended over the three days, making this edition of the Australian Sikh Games a very successful event.
The kabaddi event was of course the most eagerly awaited, and even made it to the local television news!

This year, hosts Adelaide sent in a basketball team for the first time. The Punjab Lions, a team of young and enthusiastic players, beat a tough Melbourne team in the semi-finals 41-35, showing toughness and grit to pull the game back from a 16-point deficit at halftime, for the win.
Going to the Grand Final in their first year was a great achievement, but the more experienced Sydney team showed why they deserved the top spot. Even with two players out with injury, Adelaide gave Sydney a fair fight losing 31-70.

In the premier division of the soccer, New Farm beat New Zealand Punjabi Knights 6-0. New Farm dominated their competition all three days of the Games, showing why they are still the best team in the soccer. In division 1 the final was between Shepparton and Dashmesh Sports Club Melbourne. Shepparton took an early one goal lead and didn’t give it away, coming away with the win.
In division 2 Adelaide and Bay of Plenty New Zealand went head to head in the finals. The game was a nail biter. The full-time score was 1-1 so it had to be settled with penalties. New Zealand’s goalkeeper saved a crucial penalty to hold Adelaide to 4 and then the goalkeeper himself scored the winning penalty for New Zealand making the final score 1-1 (4-5 penalties).

For many of the players, who have great enthusiasm and much talent, the Games provide an ideal outlet. Many harbour dreams of pursuing the sport at a more professional level.
Basketball player Bick Singh was happy to have had a chance to compete at the Games. “The event offered us some wonderful facilities to perform to our utmost potential. The interstate teams gave us some tough competition; I look forward to developing the sport of basketball further into our Australian Sikh communities.”

Earlier, the opening ceremony was graced by His Excellency the Honourable Hieu Van Le AC, Governor of South Australia. He was joined by the Lord Mayor Martin Haese, Russel Wortley (President MLC), Dana Wortley (Member for Torrens in the South Australian Parliament), the representatives of state Liberal leadership, and local dignitaries including Monika Budhiraja Kumar who helped initiate the partnership between the Sikh community and the government.
It included performances of Gatka (Sikh martial arts), besides the usual bhangra, giddha and drummers to create a vibrant start to the Games.

The event was held across various venues to accommodate the needs of the various sports. The athletic events and kabaddi were held at Ellis Park in the City West Terrace Parklands. Soccer was at the Comets Club Grounds right next to the main ground, and netball and volleyball were held at Adelaide High School. Pulteney Grammar HS was host to basketball and badminton while cricket matches were held at Victoria Park. The State Hockey Centre at Gepps Cross was used for hockey.

No doubt, incredible organisational skills went in to making sure everything ran smoothly.
Mohan Nagra, President of the Organising Committee told Indian Link, “Overall, six venues, not too far from the city centre, were picked. It gave the spectators a choice of which sport to watch without thinking about transport to the venue. Venues were easy to reach and transport was provided for viewers and players to venues that were outside of the CBD. Also, parking was across the road at the Netball SA stadium and shuttle busses ran every 10 minutes back and forth from the main venue to the parking.”

Hospitality at the Games was amazing with Langar (open kitchen where food is served for free) served to all the attendees and participants at the games on all three days from 8am to 6pm. Also, fruit, juice, snacks, and chai were also served throughout the day to keep the players and attendees energised to enjoy the Sikh Games. This traditional Sikh hospitality left some people astounded and others feeling proud that this Sikh tradition was being followed so humbly.

More than 100 volunteers gave their time and effort to make sure every little aspect of the Games ran smoothly. There were around 50 volunteers in the Langar area to make sure meals were prepped in time and the guests were served in a functional manner. This is the first time in Australian Sikh Games history that the Langar was cooked on site.
Other events, such as cultural night and Sikh forum, were also held after the games on Friday and Saturday night respectively. Cultural night was full of dance performances, skits, singing and gatka to keep the audience entertained for four hours. Cultural night was also made special by the presence of Russel Wortley, President MLC, and Dana Wortley MP who also danced on staged to follow the great performances. The Sikh forum attracts highly respected speakers from all over the country to discuss problems the Sikh community is facing and any ways to improve the current community.

Accolades poured in for the Adelaide organisers.
“Very surprised how the Games turned out, as usually the Melbourne and Sydney Games are the most jam-packed as they have the largest Indian populations,” Shree Sharma, one of the attendees said. “But Adelaide did set a higher standard this year.”
Bobby Sambhy (Joint secretary, organising committee) was ecstatic with how the Games turned out. “Got some great feedback,” he revealed to Indian Link. “Adelaide seems to have set a benchmark for future Games.”
The next Australian Sikh Games will be held in Sydney from 30 March to 1 April, 2018.