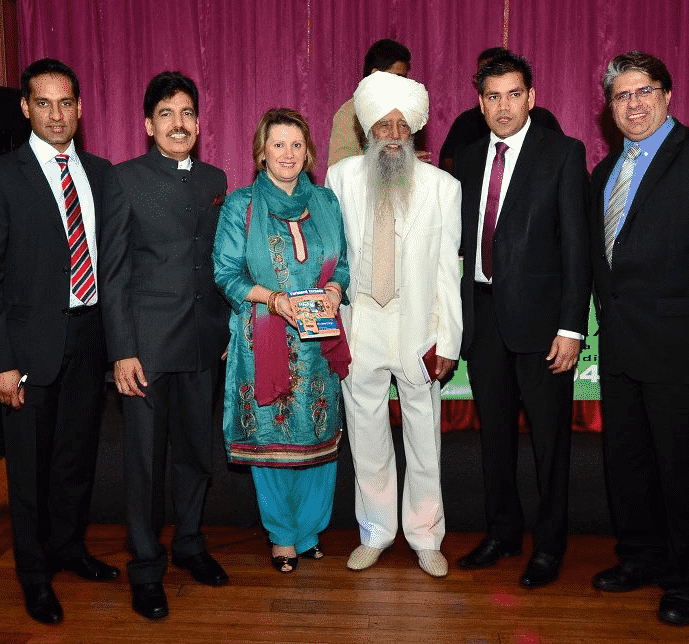 When you live to be over 100, every day calls for a celebration. Ask Baba Fauja Singh, the legendary athlete who was in Melbourne recently. According to him the secret behind his longevity is a strict vegetarian diet and abstinence from alcohol and smoking. It was Fauja Singh’s first visit to Australia and history was made as hundreds celebrated his 102nd Birthday with him on April 1 at Cafe Saffron in South Morang.
A world record holder centenarian marathon runner, Fauja Singh originally hails from Punjab in India and migrated to the UK in the 90s. His entire life has been dedicated to running and he has accomplished innumerable milestones and set many records in his age group. He recently retired from competitive running after successfully competing in the 10km marathon in Hong Kong.
Fauja Singh began running at the age of 89, and has run numerous marathons in his career in London, Toronto and many other cities. His last full marathon race was the Virgin London Marathon in April 2012 at the age of 101 – completed I 7 hour 49 minutes – some 22 minutes faster than his leisurely 8 hour 11 minutes in Toronto when he was 100. In 2004, he replaced David Beckham as the brand ambassador of Adidas, role modelling their slogan ‘Impossible is Nothing’. And what’s most impressive is the fact he has donated every single cent that has come his way, either via endorsements or otherwise, to charity. His Australian trip was a testimony to his inspiring endurance and commitment to continue running for pleasure, health and charity.
During his whirlwind trip to Australia, Fauja Singh participated in the Opening Ceremony of the Australian Sikh Games, ran with thousands for the Run For Kids event in Melbourne, met the Richmond Tigers, was felicitated by the NSW Parliament, visited the local Gurudwaras and also found time to explore the flora and fauna of Australia. The smiles never ceased, the jokes continued, the blessings never stopped, Fauja Singh was well and truly inspirational.
It was an honour to celebrate Fauja Singh’s birthday and the guest list burgeoned to nearly 250, as people continued to express interest in attending the celebration. Amanjot Bedi and Raminderjot Bedi from Della International College and Sunshine Institute of Management in Melbourne sponsored the event, which was coordinated by Jasvinder Singh Sidhu and organized with the support of Manpreet Kaur from SBS and Deepak Vinayak. Dr Preetinder Grewal co-anchored the birthday event along with Manpreet Kaur.
Mary Lalios, Councillor from the City of Whittlesea attended the event as one of the guests. Tim Singh Lawrence, Mayor of Darebin Council felicitated Fauja Singh on behalf of his council. Farrukh Hussain, President of South Asian Community Link presented the centenarian with a stamp collection issued by the Pakistan Government to mark the 400th Anniversary of Guru Arjan Dev Ji.
Kulwant Joshi, President of Sri Durga Temple in Rockbank presented a siropa to Fauja Singh. Fauja Singh’s biographer Khushwant Singh shared some insights about him with the audience, while Gurvinder Singh from Flying Sikhs offered more details of his trip to Australia. The birthday boy himself seemed to enjoy every minute with unflagging energy. The evening continued on a festive note with all the guests wishing Fauja Singh a wonderful birthday and a long and healthy life.