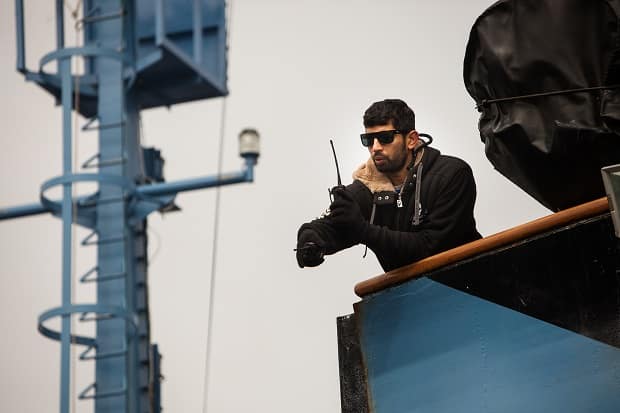 Reading Time: 4 minutesBeing part of a team rescuing whales to help conserve life in the oceans is a strenuous, but rewarding job, reports DIPANJALI RAO

The waters of the Southern Ocean are calm. Wandering albatrosses skim the surface, kestrels hover and majestic icebergs glide by as the SSS Steve Irwin makes its way into Antarctic waters. At the helm is Captain Siddharth Chakravarty (30), playing his part in Operation Relentless, the Sea Shepherd Conservation Society’s (SSCS) campaign to protect whales from Japanese poaching.

Siddharth’s tryst with the ocean started not as a conservationist, but as a seaman for the merchant navy. “I had been working on ships for 10 years”, he says of his merchant navy experience, “but I didn’t feel like my life was going anywhere”. But then Siddharth came across the SSCS and he recalls, “I instantly knew what I needed to do next. I applied and was offered a volunteer position for a three-month stint with the Sea Shepherds. The day I joined the SSCS coincided with the date I was to be in Namibia, joining a chemical tanker. I remember being a little worried about walking away from that, but I was mostly ecstatic. It was a dream come true!”

That stint changed Siddharth’s life. He was working at the frontline of marine conservation with a multicultural and passionate crew who had dedicated their lives to fighting for nature. “I returned home and after a few weeks wrote an email asking if I’d be welcome back at Sea Shepherd, but that I’d be unable to continue as a volunteer. I was offered a job with a very basic salary and that sealed the deal. I’ve been working here since August 2011”, says Siddharth.

Having been part of three Sea Shepherd campaigns, Siddharth says the hardest part about being at sea is the isolation.

“For many months of the year, the only social contact is with the crew and interaction with one’s family is limited to emails and the odd phone call”, he claims. So how does he cope? “I try to take time off every year to go home and be around family and friends, and have my fill of Indian food, culture, language and the bustle,” avers Siddharth. “I convince myself that the reason I can’t enjoy these on a daily basis is because I have a bigger responsibility”.

That responsibility brings Siddharth and his crew in direct conflict with whalers. Sea Shepherd’s strategy to protect whales is to track the whaling fleet, get in their way and physically block the harpooning of whales.

“It sounds easy, but in reality it takes hours of planning and coordinating with other ships,” he states. “The almost 24 hours of daylight means that the ship needs to be prepared at all times for a confrontation with the whaling fleet. Some days are so long, they merge into the next and adrenalin and coffee are the only things that keep me going”.

It is a massively unequal battle, Japan’s whaling fleet is government funded, while the SSCS is run by volunteers and funded by charity donations. And it is hard work; isolating, dangerous and bloody, but the results are immediate. Last year, the Sea Shepherds saved the lives of 932 whales resulting in the whaling fleet reaching less than 10% of its target, a spectacular result.

The conservation battle waged at the Antarctic’s icy edge seems far removed from conservation struggles closer to home, until Siddharth reminds me that India has one of the largest coastlines in the world.

“What affects the oceans, affects India as a country”, he says passionately, referring to the critical role oceans play in our eco-system. He lists India’s biggest ocean conservation challenges as marine pollution from sewage, dredging and construction of ports in bio-diversity hot spots, and an increase in demand for seafood which puts pressure on fish populations and leads to industrial fishing.

In regards to Australia, he worries about the impact government policy will have on the environment. Siddharth lists a litany of environmentally deleterious government policies such as approval of dumping of dredge spoil off the Great Barrier Reef and the delisting of Tasmania’s forests. He stops to make a special mention of Western Australia. “The Western Australian shark cull is a disgrace to Australia”, he says fervently. On conservation efforts, he says, “Australia is a rich country. I expect it to do more”.

So how do we do more? Siddharth believes the democratic process is the best way forward. “Democracies work by people giving feedback to their governments,” he claims. “People must inform themselves about issues that matter and put pressure on governments. Participate in activism or support an activist organisation. It [activism] inspires and educates people and leads to change”, he emphasises, stressing on the responsibility of individuals.

“Our practices over the last 100 years are not sustainable,” he adds, on a sobering note. “We cannot consume everything in one lifetime. We have to preserve what we have for future generations”.

Siddharth’s expressions about his immediate David-and-Goliath-like battles with Japanese whalers also ring true for all other conservation efforts.

“The future of Japan, of humanity itself, depends solely on the healthy functioning of the oceans. It is vital that we forget old (destructive) practices and traditions, and embrace the challenges the planet faces

with open minds”, he avers.