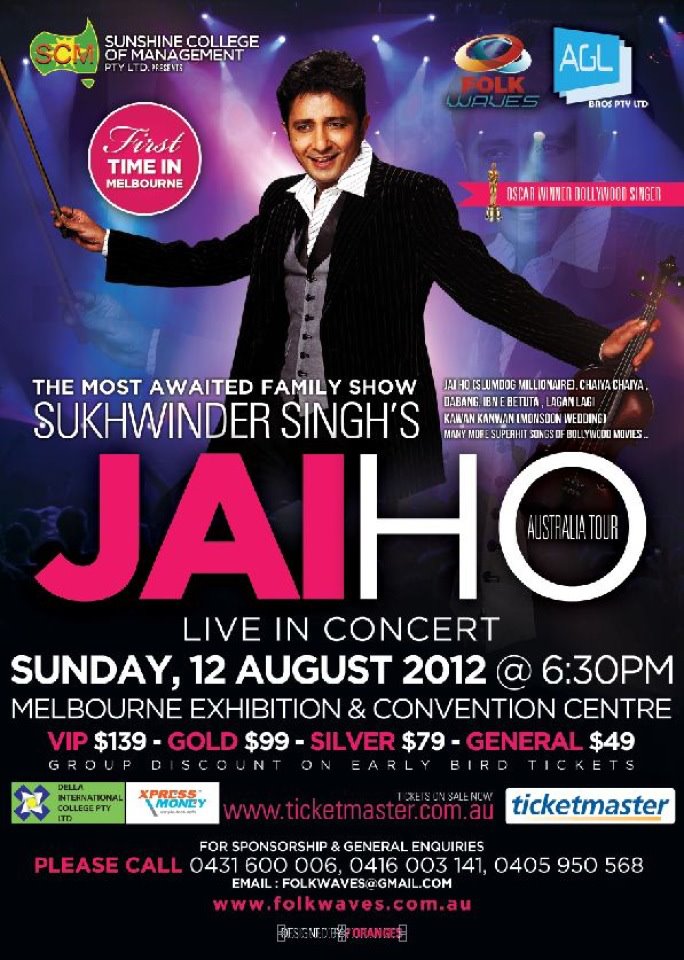 Of late in Melbourne, it has become a case of too many concerts and very little budget. However, I am glad I chose to attend Sukhwinder Singh’s Jai Ho concert held recently at the Melbourne Convention Centre. At least, I though so! Those who are still to get over his atrocious choice of clothing may not agree with me, however despite his totally gag-worthy red and gold PVC outfit, the singer has great talent and it all shone through.

As a venue the Melbourne Convention Centre is a winner, and so is the versatile singer whose popular hit song ‘Jai Ho’ from Slumdog Millionaire won an academy award for Best Original Song and a Grammy award for Best Song written for a motion picture. Sukhwinder’s vocal firepower was on display from early on in the concert as he belted all his popular songs like Haule Haule (Rab Ne Bana Di Jodi), Marjaani (Billu Badshah), Fashion ka Jalwa (Fashion), Hudd Hudd Dabangg, (Dabangg), Lucky Kabootar (Daag the Fire), to name a few.

Accompanying him was the super-confident singer and model Jasleen Matharu, who added the sizzle quotient on stage with her sexy outfits and Sunidhi Chauhan-like voice. Sunny, the popstar with tight vocals but ill-fitting clothes tried his best to engage the audience. It was however, an out-and-out Sukhwinder Singh Show as his fans got to hear him for the bulk of the time, unlike other shows where the star singer performs only for the last hour.

The tapping beat of his ever popular ‘Chaiyan chaiyan ‘(Dil Se) had the audience ready to break into a jig. He also sang the Tamil version of the song and recited the original poetry that led to the creation of the song.  By the time he launched into superhit number ‘Beedi’ (Omkara), many from the audience were up and ready to dance much to the chagrin of the security guards present. Sukhwinder encouraged his audience to participate and was happy to interact with them, but his attempts to get closer to the audience and vice versa were thwarted by the burly security men.

With his song ‘Chak de India’ Sukhwinder invited children onstage to sing with him, and within minutes the stage was full of his young fans from as little as 3 years. Cameras and mobile phones came out by the hundreds as parents attempted to capture the special moment. There was never a dull moment through the whole evening, and that to me is a huge factor in liking or disliking a show. In that respect, he got most of my votes. When Sukhwinder ended the show with my favourite song ‘Nasha hi nasha hai’ from an earlier album he had me hook, line and sinker.

Later on when I got to chat with the singer in a post-show event, he came across as an interesting personality with a great passion for music.  Sukhwinder chatted amicably and shared some of his experiences in the Indian film Industry. He spoke of his special regard for lyricists like Gulzar and his love for poetry.  Talking to him it was hard to imagine that he is generally reclusive by nature. According to sources close to him, Sukhwinder prefers to spend most of his time in his massive home in Mumbai, and has employed 18 people to look after him. I guess a voice as wonderful and warm as his may require major upkeep?

Melbourne-based group Folk Waves Entertainment Australia were instrumental in organizing the Jai Ho concert with the support of Sunshine College of Management, AGL and Della International College.  Gagan Sandhu, Director at Folk Waves Entertainment said that they aim to bring quality artists from India to Australia and also promote local talent.  Apparently this was Sukhwinder’s first show in Melbourne, and let’s hope he does not forget the city the next time he visits, even though a bigger, better crowd wasn’t at hand to witness the event.