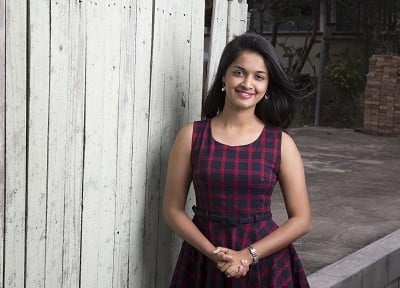 When Maya Peres Bhatt first came here two years ago, she thought Brisbane seemed a lot like Mangalore, her home town in India.
Perhaps that’s why she fell in love with the city instantly.

“It’s warm and sunny,” she told Indian Link. “And not just in the weather, mind you! The people are warm and welcoming too!”
The 21-year-old is part of the grand new exhibition that opens shortly, called 100% Brisbane.
One hundred Brisbane residents will have their stories told in this exciting and unusual exhibition, which aims to ‘paint a living breathing picture’ of the people that make up this city.
One of the lucky hundred, is apni Maya.
Joining her in this exhibition will be people from 15 different nationalities, who speak 30 different languageS, and who range in age from 4 weeks to 84 years. There are five Indigenous Australian members and 10 LGBTI residents, including one transgender person.
Based on data from the Australian Bureau of Statistics, each person selected represents one per cent of the city’s population. Together, they will showcase the multicultural population of Brisbane, and reveal its identity.
Each person will tell their story in a 90-minute film. You can also learn of their opinions on a number of issues, their beliefs and attitudes.
Also included in this unique exhibition, according to a Museum statement, are “artwork and objects from defining moments throughout the city’s history – from the dispossession of Aboriginal people and the harsh beginnings of a penal colony, to the consuming and devastating floods and tram era”.
Museum of Brisbane Director Peter Denham says, “Each person’s voice in the Brisbane DNA community provides an insight into who we are, how the people of Brisbane have shaped the city, and how we have been shaped by some of the defining features of this place.”
The “100%” concept comes from Berlin-based theatre company Rimini Protokoll. It makes use of hundred people, in interactive settings, to reveal the ‘look and feel’ of the city they call home. Berlin, San Diego and Paris have so far featured, and closer home, Melbourne and Darwin.
These events though, have been in the form of stage productions, while Brisbane makes it a first, not only as an exhibition, but an evolving one at that, which will run for three years.

Some of the newest Brisbanites are sojourning international students like Maya.
Maya came here to do a Masters in Integrated Marketing Communication at the Queensland University of Technology. She graduates shortly and is currently looking for work in marketing or business development.
Of course, she would like to stay on in Brisbane, that goes without saying.
“To my mind, Sydney and Melbourne are like Delhi and Bombay!” Maya laughed. “My family were seriously considering Monash Uni for me, but I’m quite happy to have made it to QUT. I much prefer Brisbane, which as I said, is like Mangalore – where the pace of life is less dramatic. In my first few days here for instance, I thought even the bus drivers were so helpful! That really warmed my heart, as a young girl away from her family for the first time, in a strange city. And when strangers smiled and greeted me every day, I couldn’t help but be drawn into the friendly culture of this city.”
Plus of course, the multicultural nature of the city was attractive too, and the education opportunities it offered.
It’s no surprise then Maya wants to give back to the city that welcomed her with open arms.
“I feel so honoured to be a part of this great exhibition,” Maya revealed. “As an international student, I’m really an outsider, but to be considered as an inherent part of this city, a Brisbane girl, is heart-warming! I’m going to give my 100 percent to this city, and call it home.”
100% Brisbane opens at the Museum of Brisbane on 15 July
Photo: Russell Shakespeare