Shashi Tharoor is a surprise guest at Sydney Onam event 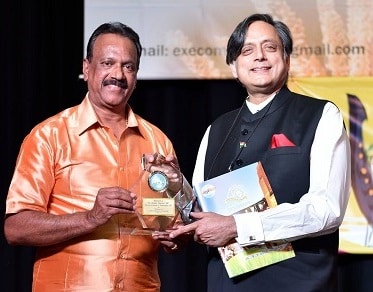 The Sydney Malayalee Association’s Onam celebrations at Blacktown recently had a very special guest: former diplomat, author and orator Dr Shashi Tharoor.
“This is the right opportunity for the kids who grow up here to be indirectly reminded of the roots that they are leaving behind,” said Tharoor, who is also a two-time Member of Parliament in India.

“For the migrant diaspora, once you skip a generation, you feel that the appeal of the motherland changes. Possibly the first generation of children will relate to Kerala, and the next generation – if you are lucky – will still relate to India, and thereafter it is the distant memories about the ‘grandparents’ country and grandparents’ states’. And that is where celebrations like this matter, where a conscious effort is made, to preserve the sense of identification,” Tharoor pointed out.

Along the lines of what he stated, Onam celebrations this year was truly the celebration of the spirit of Keralites.

The Bowman Hall in Blacktown saw close to 1,000 people from diverse backgrounds enjoying the Onam Sadya, a banquet traditionally served on a banana leaf. The blend of flavours was a scrumptious experience for the adults and children alike, and it was interesting to see the Australian Parliamentarians enjoying it.

Ray Williams, Minister of Multicultural Affairs and Disability Services, was the chief guest of the event. He stated, “This generosity and welcoming spirit of the Keralite community that we witness here is the symbol of hope, sincerity and harmony for the entire nation; and it does contribute substantially to our status as the most culturally diverse country.”
Jodi McKay, Member for Strathfield, proved her love for saris once again when she wore a traditional number at the event.

Councillors Susai Benjamin and Moninder Singh and President of United India Association John Kennedy were also guests at the event. The day also had a spectacular cultural event and some traditional outdoor games as well.
“We endeavour to make sure that the members of our community remain connected to the mainstream, yet retain our cultural identity as well. We have been organising a range of activities the whole of last year in that regard,” said Mr John Jacob, secretary of Sydney Malayalee Association.

This has included a get-together for elderly members, a spelling bee competition for children, a public speaking training workshop, a symposium on the topic Cultural Conflicts, and a barbeque and musical night featuring the much adored Malayalee musician Vaikom Vijayalakshmi.
Women’s forum and youth forums have also been formed, creating space for people from different realms to life to work amongst the community.
- Advertisement -
Share
WhatsApp
Facebook
Twitter
Linkedin
Previous articleWhat it means to be an Indian gay dad
Next articleWhy I’m voting yes for marriage equality