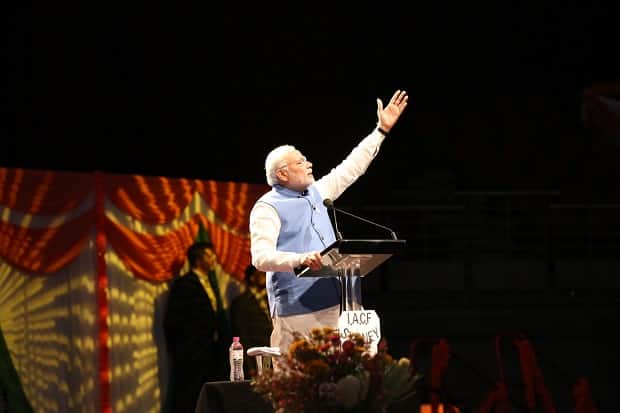 Modi blew us all away. But then, we always knew he would, writes USHA R ARVIND

Having captured the imagination of millions back home with his radical ideas and visionary beliefs, India’s charismatic new Prime Minister Narendra Modi aka NaMo, finally touched base with expatriates as Sydney rolled out the red carpet for a rock star reception, uniting the heterogeneous diaspora in a show of strength.

It was a magical Monday that will be etched in our memories forever. Even the Australian dignitaries gathered on the occasion watched on in awe, lapping up the thunderous applause and freezing the moment with their mobile phones.

As I hopped off the train at Strathfield en route to Allphones Arena, an excited CityRail attendant let me through the electronic gates. “You must be going to meet your Prime Minister,” he quipped.

The humble chaiwallah’s rags-to-riches tale, scripted to perfection, like a Bollywood extravaganza, has clearly struck a chord with more than just the deshis and videshis. There had been media frenzy all week both on the domestic and international front. Expectations ran high, the mood was electric and Modi-mania gripped Sydney Olympic Park as 20,000 Indian Australians congregated to finally meet the man himself. The repercussions were felt far and wide. And the show didn’t disappoint.

The doomsday prophets were nowhere to be seen and nay-sayers were clearly in the minority, drowned out by the overwhelming exuberance.

Tapping into their extensive resources, the Indian Australian Community Foundation unveiled an impressive performance. The arrangements were impeccable – right from the free shuttle to ticket distribution, crowd management to cultural showcase. A Modi-fied vegetarian menu was up for grabs too in honour of the teetotaller. A large network of volunteers ensured the big night out unfolded without a glitch.

Every ethnic minority was well represented including the Tibetans and Dawoodi Bohras, conspicuous in their traditional attire and proud to be a part of celebrations. Religious differences were put aside, despite attempts by some sections of media to harp on about unsavoury incidents of the past. India was in the limelight and nothing else mattered.

The euphoria was palpable, rising to a crescendo when Modi finally took centre stage. And the global audience listened in rapt attention.

Much has been written about his firebrand rhetoric and consummate showmanship but what the Allphones Arena witnessed on the historic occasion was simplicity of his vision and genuine desire to uplift India, quite along the lines of our freedom fighters. Hoping to emulate Mahatma Gandhi and Swami Vivekananda, Modi’s grand plans are firmly centred on “small” men.

“Many people hold dreams of doing many great jobs. Good luck to them, what I have to do is small jobs for smaller people… and [make] the small people big. That is what I want to work for,” he reiterated.

His vision of India is founded on egalitarianism and meritocracy. “We weren’t fortunate enough to fight for the country’s freedom, we didn’t have the good luck to go to jail for India’s independence. We couldn’t die for the country, but at least we can live for the country. If we fight, if we struggle, it should be for our country,” he further stated passionately, whipping up the spirit of nationalism for the first time in post-colonial India.

While nuclear power, clean energy and regional security, figure prominently on Modi’s agenda, his immediate priority is a clean India – an India that we can all be proud of. Borrowing heavily from our traditional belief that cleanliness is next to godliness, Swach Bhaarath Abhiyaan is not only his pet project, but one that dominated his Sydney address.

“After so many years of independence, not getting clean drinking water or electricity is something we are not proud of,” the Prime Minister admitted with brutal honesty. “Basic sanitation and hygiene are pressing issues. If we can make the country clean, it will be the biggest service for poor people,” he continued. “If you have any feeling to save your country, then you can clean up the image that the world has of India.”

Earlier, acknowledging the traditional owners of Australia, Modi spoke of shared values and common inheritances. Outlining the extensive contributions of Indian Australians to their ‘karma bhoomi’, he complimented them on their culture of hard work and dedication.

The role of the Anglo-Indian legacy in shaping the history of Australia did not go unnoticed. “Australia is a beautiful country with bountiful resources, but your biggest asset is your people,” he added.

But what struck Modi most was the dignity of labour. “I have always admired this concept. Here, a research scientist also works as a cab driver. There is no shame in hard labour,” he noted, saluting the egalitarian spirit.

Paying tribute to the strength of democracy in the two countries, he firmly believes India would once again lead the world, as a young and energetic nation with “2,500 million arms”.

“Democracy is a wonderful concept. I am here because of Indian democracy. Even a common man can climb greater heights in a real democracy like India.”

Speaking personally to every member of the gathering, he stated “I know many of you took great interest in the Lok Sabha elections of 2014. I know that for you, it was not about who wins or loses, it was about wanting to know when India will become like the country that you are residing in.”

Working closely with the diaspora, Modi hopes to deliver on the herculean promises he has undertaken on common’s man’s behalf. To this end, he has already begun dismantling bureaucratic red tape and gargantuan hierarchies that have stifled economic progress.

“Please let us open the window and let some fresh air in. Let us breathe and live for the first time and savour the new found freedom,” he added poignantly.

An astute leader, Modi is also acutely aware of the strength of youth power and is engaging with them as never before.

“We want to achieve new heights of development, my dear young friends, and India has decided to concentrate on the young people,” he highlighted.

“On the confidence of their talent, on the confidence of their capacity, they would become competent to help the whole world. I wish that the whole world should come to India. The manufacturing sectors, they should come in… because I wish that the youth of India should get employment. I have decided that 100 per cent foreign investment will be allowed in the railways. I’m inviting everyone – please come, please come and invest ineclared, and Australia will no longer be at the periphery of its vision. Perhaps Indian Australians can play a greater role in shaping the destiny of their mathrubhoomi.