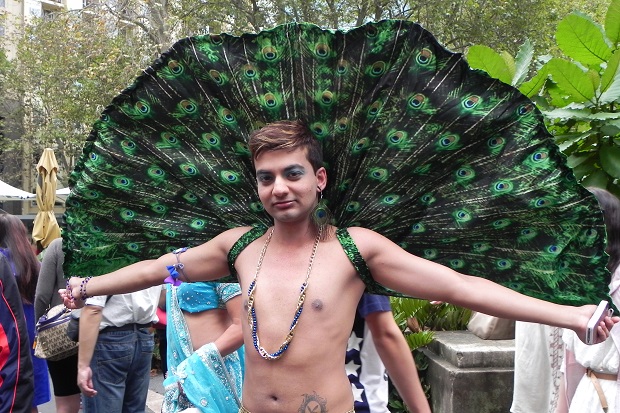 Saturday, March 1 saw perfect weather for India’s national bird to strut its stuff and dance to the tune of freedom at the Sydney Gay and Lesbian Mardi Gras (SGLMG) parade. The Gay, Lesbian, Bisexual, Transgender, Queer, Questioning and Intersex (GLBTQI) participants from Trikone Australasia – an organisation for South-Asian queer communities living in Australia – chose the ‘peacock’ this year, as the theme for their participation in the parade.

The peacock is known for its beautiful mix of colours, each having their own uniqueness, beauty and significance. However, there still exists a tendency to discriminate against people who even slightly defy our definition of ‘normal’. Trikone, just like the 144 other groups participating at the parade, stands against this very discrimination against the queer community.

Dressed in stunningly colourful outfits, the peacock parade bedazzled spectators as they spread their rainbow feathers and danced to the tune of freedom. This array of colours perfectly complemented the 2014 theme of the Sydney’s 37th Gay and Lesbian Mardi Gras, the ‘Kaleidoscope’.

Sydneysiders witnessed a spectacle of colours, music, glamour, and most importantly, love, as over 10,000 participants from different part of the world came together to celebrate their identity with pride.

According to SGLMG CEO Michael Rolik, the theme of ‘Kaleidoscope’ was chosen to see the GLBTQI communities more fully represented in the parade than ever before. “This would also extend to the communities who haven’t had a strong presence in the parade in the past,” said Rolik. “The organisers chose this theme to encourage revellers to ‘let their colours of freedom and pride burst!’”

Despite heavy rain a couple of days prior to the parade, late in the afternoon on Saturday, the sun suddenly came out and washed the gloomy weather away. But the participants from Trikone were prepared to dance in the rain, just as peacocks are famous for.

The South Asian queer communities are waiting for the ‘sun’ to shine upon their home countries so that the celebration of their identity is not just limited to occasions like the Sydney Mardi Gras parade.

Travelling to Sydney from India for work, Kanish was thrilled to be attending the Sydney Mardi Gras Parade for the first time. “Here people don’t bother if you are of any gender or any sexuality. In India, that is still a tool for discrimination”, he stated.

Many share Kanish’s plight as the Supreme Court in India recriminalised homosexuality again in December 2013 under Section 377 of the Indian Penal Code. It is difficult to survive in a country where one is constantly judged and sneered at. “Through our activities in Sydney we hope Indians can see that we are normal human beings and that there is no need to have criminal laws against us”, said Binu Raghavan, co-founder of Trikone Australasia.

Sadly, even in Australia, life is not exactly easy for the South-Asian GLBTQI community. On one hand they battle discrimination arising from the colour of their skin, while on the other there is their sexuality. “There are many GLBTQI who feel suppressed and are not able to be open about their sexuality, albeit it’s just one part of the whole individual”, says Alan Maurice, Co-chairperson, Trikone Australasia. Amidst such circumstances, “Trikone exists to stand up for the South Asian GLBTIQ community here in Australia while doing anything we can to raise awareness and supply information to our countries of birth”, explained Maurice.

Even among participants from Trikone, the reasons for celebrating at Mardi Gras and the sentiments involved were different. Giselle*, dressed in a detailed turquoise Indian outfit, came “just have fun and enjoy the day”, while Chasna Harper, decked out in a lovely peacock outfit, spread her peacock feathers and said somewhat graphically, “If you are South Asian and queer, you should be proud as a peacock and strut your stuff and s**** Section 377!”

Zeenat Parveen* donning a beautiful multi-coloured lehenga, similar to the one worn by actress Deepika Padukone in the film Ramleela, put his best foot forward as he hoped, “For the queer community in India and all over the world to have equality in all areas of life”.

This year’s parade had the largest number of floats ever seen. ‘The Polly’s’, Australia’s largest and oldest Gay and Lesbian Social Group celebrating 50 years, were the chief parade this year. Holding hands and blowing kisses to the cheering crowd were the first 31 married gay and lesbian couples from Canberra. Even the NSW police had a float to support the diverse queer community of Australia.

Comprising of over 100 events, the Sydney Gay and Lesbian Mardi Gras is not just the biggest party of the year, but also a major contributor to NSW’s tourism. Sandra Chipchase, CEO, Destination NSW said that this year’s Mardi Gras parade attracted over 29,000 interstate and international tourists and would bring in an estimated $30 million to the NSW economy.

Needless to say, the SGLMG provides the South-Asian queer communities, definitely a minority, within a minority, the best platform to come out in the mainstream, express their love freely, and feel a part of something bigger.