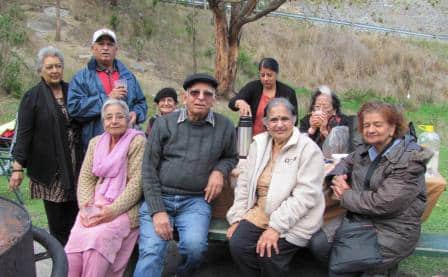 The Indian Senior Citizens Association (ISCA) held a picnic in April at Kangaroo Point in the vast and picturesque Cardinia Reservoir, south-east Melbourne. The weather was typically Melbournian, and the region was acceptably cool as the bus reached the meeting point. Ominous noon clouds benevolently showered sunshine on us instead of rain. Some members arrived in their own cars, bringing the total of attendees to 135.
As we drove in, bubbly member Katy Cooper was noticeably seated with a visibly fractured leg, as her foot had hit a protruding root formation, causing her to fall down. Entirely lost, Minoo Cooper stood by Katy, his demeanour bewildered. Suddenly, the picnic dulled into insignificance, and appeared to have ended before it had begun. The ambulance was summoned and after it finally arrived, we heaved a sigh of relief as Katy was driven away to Dandenong Hospital.
Members gathered around the spot where a veg and non-veg BBQ had been arranged for a nominal price. The ambiance was chilly, so we gathered around a dying BBQ to stay warm and shared our food. Friendly Madhu and Naresh Mithaiwala had brought in, as you can guess, lots of delicious mithai to share. There was jalebis and dhokla too. Some members brought in beers, and then entertained us by collectively singing Bollywood oldies, while Raj Babbar performed his unique clapping, as only he can, which sufficed as loud-enough accompanying music.
Now came the fun part as Shano Rajkumar and Rose Thakur settled everyone around to celebrate a mock wedding. Madhuri Haikerwal, a great sport by any yardstick, was chosen to play-act the timid bride, and none other than yours truly was the groom. Many members were picked to play musical instruments allocated to them by Shano. Dada-dadi, Nana-nani, uncles-aunties in dozens escorted the groom to his bride. Bhim Sud was the preacher who conducted the wedding, and the groom was allowed to lift the veil from his bride’s face, only to find a commotion arise. Raj Babbar, the bride’s boyfriend barged in protesting against the wedding and brandishing a firearm, audaciously abducted the willing bride while the groom stood by howling with grief.
The excitement of the abduction once completed, Shano and Rose picked up six husbands and blindfolded them. They then placed different wives hands in those of the chosen men, who had to identify their respective wives by feeling her hand alone. While some picked their wives correctly, some failed miserably, and only Prem Phakey admittedly cheated because his blindfold was porous.
After that, members played antakshri until 5pm, bringing to an end a wonderful day out.
For information about ISCA meets, please call President Prem Phakey on 9560 9607

The Kingston Indian Senior Citizens Association had a meet which, in comparison, was a rather subdued affair attended by only 35 members. The first item for the day, as always, was to thank Him for His many blessings upon all. The next item that a despondent President Mona Raju conjured up was to ask members if KISCA is better wound up, because membership just was not rising. The consensus was an immediate and resounding ‘No!’ Members did not even want KISCA moved to the FIAV office premises in Dandenong, as forum meetings are already hosted there. Members offered to assist Mona in day-to-day functions, although the downfall was still the number of members.
Nonetheless, Mona and Barbara Nagaya led us in karaoke singing nonstop Bollywood oldies for an hour, some of which were truly oldies, “yehi who jagaah hai, yehi who fizaa hai, yaheen per kabhi aap hum se mile the, and mushkil hai bahut mushkil, chaahat ka bhula dena.” Young Ashwini Niha Sen also sang a song in her sweet voice. And, take my word as truth, the power of the rich and poignant Indian music soothed the pain of there only being 35 of us.
For information about KISCA affairs, please contact President Mona Raju on 0425 226 846.

Northern Region Indian Seniors Association (NRISA) carried a busload of its members to beautiful Torquay, 60km from West Melbourne. They gathered in one of its many waterfront parks, to a welcome from President Santosh Kumar. The weather was cool, but the sun uncharacteristically shone, although not everyone chose to wade in the ocean. After playing games at the beach, where children ran around and tested their vocal chords, everyone gathered together to share homemade vegetarian food. Since the drive back home was about 90 minutes long and the weather was turning truly Melbournian, they left for home at around 4pm.
For information about NRISA, please contact President Santosh Kumar on 9816 3401.

Indian Seniors Forum (ISF) members took a two hour journey to Bendigo in the Bombadier trains that leave after 8am and return travellers home by 7pm, leaving a good 3 hours plus to explore Bendigo. Seniors used their free tickets and the journey was comfortable, with the group chatting with one another. For this particular trip, a short walk from the station brought members to the Indian Tavern Restaurant, where a sumptuous lunch was served to the group. Everyone was now keen on the next event, a tram ride around Bendigo, which took members around local landmarks. It had been pre-agreed that the trip would be a gaana (singing) and khaana (eating) trip.
All forum meetings are free with light refreshments served. The forum meets at Dandenong on the first Saturday of the month, at Point Cook every second Saturday, at Clayton every third Saturday, and finally at Camberwell, every fourth Saturday.
Call Anand Shome (0422726483), coordinator for Dandenong, Rakesh Auplish (0408381487) for Camberwell, and Nardev Sharma (0449877920) for Point Cook. Or call Siri Krishan Auplish for further details on 95436615.