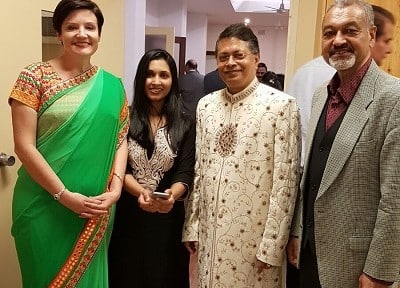 At a recent Diwali function in the US, president hopeful Donald Trump declared “I’m a big fan of Hindu”, before going on to the usual platitudes about India being a ‘good friend of America’ etc.
Here in Australia, Jodi McKay could have told him what is wrong with that statement.

At a similar function in Sydney, the NSW Member for Strathfield proved once again why the local Indian community holds her in high regard. She arrived in full Diwali mode, shining like a light, in a sari carefully picked for the occasion. She spoke knowledgeably – and with pronunciation that was spot on – not only about the festival, which she described as “one of my favourites”, but also about her many South Asian constituents, a number of whom she obviously knew personally.
And by the time her voluntary solo performance came on, in which she screwed in that light bulb and patted the dog to show off her Indian dance steps, the spunky lady had the audience eating out of her hand.

Take a leaf, Donald.
McKay was special guest at the Diwali event organised by the Strathfield Australians of Indian Subcontinental Heritage (SAISH), held at Strathfield Council.
At a time when council amalgamation is a hot topic, Strathfield Council certainly showed off their credentials as a council for all Australians.
Strathfield Councillor Raj Datta observed that of 152 local councils in the nation, Strathfield was one of the few celebrating Diwali. Expounding that initiatives with new Australians serve only to enrich the fabric of life, he noted, “Australia has nothing to fear from migrants”.

For his part, the President of the SAISH Executive Committee Dr Sri Ranga Reddy thanked the Strathfield Council for its help with the local Indian community and for allowing the use of its facilities for its own activities.
Consul General of India (Sydney) B Vanlalvawna boomed into the microphone and managed to get the noisy crowd quiet for long enough to listen to his Diwali greetings (even as Raj Datta tried to shush everybody and Jodi McKay observed haplessly that the crowd was more unruly than Parliament).

The entertainment included classical Indian as well as more informal presentations, with Ruchi Sanghi’s damsels in black standing out in their Kathak numbers. Mohiniattam and Kuchipudi were also authentic. The crowd got into the geet-gana in keeping with the festive mood, getting up to dance with Vinod Rajput’s golden oldies, swaying along to Dilip Bhave’s newer numbers, and relishing Leena Mehta’s hits from both eras. Paediatrician Dr Ajay Sharma might well be looking at a new vocation as a stand-up comic, as he revisits popular Bollywood material in humorous new light.
Perfect as Diwali entertainment!