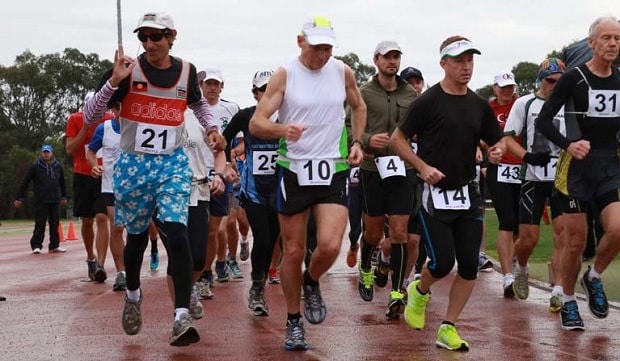 Sydney’s Blacktown Sports Park hosted the annual Sri Chinmoy 12 and 24-Hour Race on June 14 and 15 and no, it is not a car rally, it is a running race.

Held around a 400-metre athletics track, the ultra-runners in the main event start at 10am on a Saturday and finish on 10am on Sunday.

With competitors facing exhaustion, bad weather, blisters, no prize money and considerable financial and time commitments just to participate, you might well ask: why would someone do this? Well, it is all done in the name of ‘self-transcendence,’ a term Indian running guru and race founder Sri Chinmoy used to describe going beyond one’s present capacities.

Runners are encouraged to set goals and compete with themselves. To try hard and dig deep. The distances competitors cover and the personal goals they set, forces them to overcome hurdles like doubt and discomfort, and at the end of the event they come out having achieved something momentous.

Spokesman for the Sri Chinmoy Marathon Team (SCMT), the volunteer group which conducts the Sydney 24-Hour event, Prachar Stegemann said, “When we challenge and improve ourselves, the world around us improves with us. Each step the runners take, if it is done in the right spirit, can add to the idea that each one of us can contribute to a better place”.

The SCMT is one of the largest conductors of fitness events in the world. Run entirely by volunteers, it was founded by Sri Chinmoy to promote running to the public. As a runner himself, he encouraged people from all ages and backgrounds to work on their fitness to maintain a balance between their inner and outer life.

“The inner life and the outer life must go together,” he said. “The body is like a temple and the soul or inner reality is like the shrine inside the body-temple. If the temple does not have a shrine, then we cannot appreciate the temple. Again, if we do not keep the temple in good condition, then how can we take proper care of the shrine?”

The Sydney 24-Hour, like all SCMT events, asks competitors to have a few moments’ silence before the start gun to contemplate going deeper within and to perhaps combine the activity of running and meditation.

This year, every competitor got into the spirit of trying their best. Some competed for the first time, others attempted to remain cheerful despite injuries or difficulties, many set personal bests and some re-wrote the record books.

Proving that age is no barrier, the open 24-Hour race was taken out by the sixty-one-year-old New Zealander Bryan McCorkingdale, running 223km in the allotted 24 hours. He won a close tussle from Wodonga athlete Kevin Muller (221km).

The female champion was Meredith Quinlan who ran 215 km, but it was in the 12-Hour that some of the most impressive results came.

West Australian psychologist Bernadette Benson travelled the long distance to Sydney and came into the race with a mission to run fast and take home some records. In a gritty and focused performance she covered a remarkable 133 kilometres. Amongst many others, she now holds Open Australian 12-hour, 24-hour, 100-mile, and 200-km records. “Her speech at the awards ceremony was memorable,” commented 24-Hour race director Martin Fryer.

“She brought all the runners into her victory, by explaining how she had watched others going through their own tough times and drawing on the strength and courage they all showed”.

“Runners band together to encourage each other,” mentions Bernadette on her blog. “Going past people, I’d get snippets of conversations where people were talking about their goals, their revised goals, and their challenges, and getting support from others who, in fact, were their competition! What other kind of race is like this?”

The event was certainly an inspiration to the many well-wishers, competitors and helpers who attended and it will all be happening again in 2015.