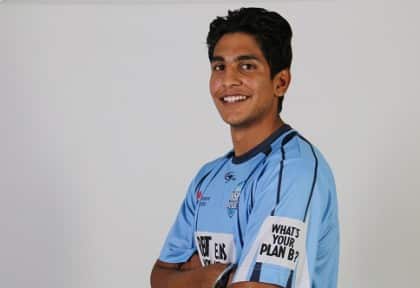 Earlier this year, the prodigiously talented Novocastrian became the youngest player ever to win a NSW rookie contract for the upcoming season. The Year 11 student of Hunter Sports High joined Josh Hazelwood and Jake Doran as the only players to have been contracted by Cricket NSW while still in school.
Remarkable performances over the past 12 months have seen Jason’s stocks enjoy a dramatic rise. Last summer, Sangha quite literally burst on the national scene, demonstrating phenomenal personal growth.
It was at the annual U15 Schoolboys carnival in Darwin that he caught the selectors’ attention. The fourth generation Punjabi Australian’s outstanding contributions as top order batsman not only helped NSW cement a spot in the finals but also landed him a place in the coveted Cricket Australia Invitation sides for both U17 and U19 National Championships.

Jason went on to score 167 runs at an average of 41.8, including 48 in the final to see NSW to victory. At the U17 National Championships in Brisbane, he contributed 310 runs including four half-centuries.
Incidentally, he was the only player to progress from Brisbane to the CA XI for the U19 championships, scoring 102 on Youth ODI debut against Pakistan in Dubai. His fearless knock included 13 fours and two sixes. Jason’s maiden international century and fellow teammate Liam Hartcher’s five-for eventually facilitated a 23-run win, the first in the tri-nation tournament in UAE.
In fact, batting in the middle order, Sangha’s 113-ball century helped Australia recover from a poor start of 45 for 5, anchoring steady partnerships to lift the total above 200.
“We are delighted to be able to bring Jason Sangha into the Blues squad this summer,” Cricket New South Wales CEO Andrew Jones stated. “CNSW has a long tradition of backing young talent and we look forward to seeing Jason develop under the guidance of the Blues coaching staff and senior players. 2015-16 has been a solid season for NSW. Having won the Matador Cup and achieving the best win-loss record in the Sheffield Shield, our challenge now is to build on this momentum.”


“I am both honoured and proud to have played in the U15s, U17s and U19s national carnivals in a space of 6 months. Representing Australia was an absolute privilege. Before the Darwin tour, I hadn’t really thought about playing in other tournaments. So it came both as an utter surprise and an absolute bonus,” an elated Sangha told Indian Link.
Sangha’s stellar achievements have also attracted lucrative sponsorships, including Gunn & Moore, Asics, Oakley Sunglasses, Taro Cash and Adina Apartments in Coogee, where he stays while training with the Blues in Sydney.
Appreciative of the numerous opportunities that the elite pathway now offers him, Sangha is determined to grow his game with hard work and solid stats, thereby consolidating his future.
Parents Sylvia and Kuldip are justifiably overjoyed with Jason’s phenomenal success.

“It was an amazing day when Cricket NSW offered him a rookie contract, being the youngest ever in history,” recalled mum Sylvia. “It was definitely something he’s wanted, but had no idea it would come so quickly,” she explained.
“We are so proud of Jason, especially when you go to a National U19 Carnival and your son who has only just turned 16, goes out and faces up to the men, and gains so much respect from the people that matter. The proudest moment for us was when he was picked in the U19 Australian World Cup team that toured Dubai and scored a century in his very first game at barely 16 years of age against Pakistan,” she added.
Ironically, cricket did not initially feature in young Jason’s radar. “Neither Kuldip’s family back in India nor mine here in Murwillumbah ever played cricket, growing up,” quipped Sylvia, whose grandfather Baba Ram Singh was one of the earliest immigrants here and an icon in the Sikh community.
Jason’s father, a state sprinter in 200m and 400m format for Punjab, may have abandoned his personal ambitions for financial reasons, but he has undoubtedly transferred those athletic genes to his talented son.

“Whenever India played cricket against Australia, Kuldip would always watch with interest,” Sylvia pointed out.
Eight-year-old Jason thus accompanied dad to an early India-Australia match, featuring Adam Gilchrist.
The rest, as his mother joked, is history. The impressionable youngster was hooked and wanted to copy Gilchrist. After weeks of pestering, Sylvia finally bought him a $40 cricket kit.
“When Jason first started with Randwick Gold U9 Team, he had no idea how to play cricket, I had no idea either. He was just having fun and we never had any big dreams or ambitions. He just wanted to do what Adam Gilchrist did,” she recounted.
Describing him as an average player but with eagerness to develop, she made preliminary enquiries at SCG nets, enlisting Randwick Petersham’s Eddie Otto as her son’s first ever coach. Net sessions with dad also became a daily ritual.

Barely 18 months later, the family relocated to Newcastle to pursue business interests, establishing roots there.
Brett Jackson, a first grade player with Sydney grade experience, took on the mantle of Jason’s guru, predicting even then that 12-year-old would one day play for Australia.  Powerful beyond his years, the gifted Jason simultaneously made his debut in Newcastle’s first-grade competition at barely 13.
Rising through the ranks of district and grade cricket, Sangha scored his maiden representative century in 2013 for U14 Moore Shield, garnering over 300 runs. His Weblin and Watson campaigns were equally successful, with consecutive highest scores of 138. This led to an invitation to inaugural state challenge and selection to NSW school team.
“His selection into U15 Schoolboys was long and hard but weeks earlier Jason made 108 not out in the CHS Schoolboys Carnival in Bathurst. Being from country NSW, Jason had limited exposure to high level coaching, facilities and opportunities, but he always felt he could prove his worth,” noted Sylvia. His self-belief and determination have certainly paid rich dividends.

However things haven’t always been smooth sailing but then that is the true nature of cricket.
Sangha opened his U19 innings with a soul shattering duck. Showing resilience, the gutsy fighter however immediately bounced back to score 122 against Tasmania in the CA XI’s second match, hitting eight fours and six sixes in 134 balls.
His strong work ethics have guaranteed Sangha’s competitiveness. “In today’s cricket one must be well-rounded and Jason is aware of this and works hard to have all the attributes to become a professional cricketer,” emphasised Sylvia.
Sangha has since been selected to tour England for CHS team. He also transitioned to Sydney Grade cricket, playing for Randwick Petersham Cricket Club. Some exciting partnerships with Sydney Thunder are in the offing too.
As Jason prepares to juggle Blues training and elite cricket this year besides HSC in 2017, he certainly has a busy timetable shuttling between Sydney and Newcastle.
Sylvia has structured her life around his schedules. “Just these last 12 months I have been to Bathurst, Tamworth, Dubbo, Coffs Harbour, Bowral, Brisbane, Adelaide, Darwin, Dubai, England, Hunter, Maitland, Canberra, Sydney and surrounding areas! Our family places a lot of importance on education and CNSW is fully supportive of this, helping him with private tutors,” she reiterated.

While CNSW has taken over Jason’s training schedule, both Kuldip and coach Brett Jackson continue to be his heroes and mean the world to him. “They both made me the player I am today,” a grateful Jason acknowledged.
Jason’s role models include Ricky Ponting, Michael Clarke, Joe Root, Hashim Amla.
“The last year has seen him look up to and emulate Virat Kohli. He wants to learn from the greats but above all, also be himself,” emphasised Sylvia.
Inspired by powerful mentors, Jason has also become ambassador for The Lend a Hand to Hugo Foundation, which raises awareness on autism.
Photos: Cricket NSW, Sylvia Sangha
- Advertisement -
Share
WhatsApp
Facebook
Twitter
Linkedin
Previous articleAmbedkar at WSU
Next articleWhy ignorance is more dangerous than Muslim immigration