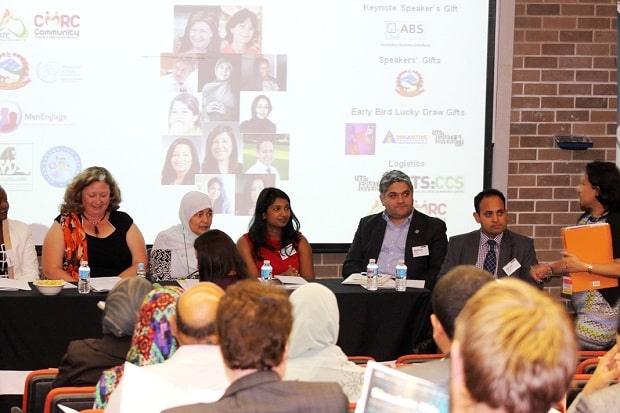 The international 16-day campaign focusing on the intersections of gender-based violence, conflict and militarism, brought together academics, social workers, activists, politicians, counsellors and community leaders at a recent event at the University of Technology, Sydney.

The campaign begins each year on the International Day for the Elimination of Violence Against Women, also known as White Ribbon Day in Australia (25 November), and ends on International Human Rights Day (10 December).

At this seminar, on the theme Women, Peace and Security, Speakers and participants brainstormed their way to achieving the production of a discussion paper to be submitted to the NSW Premier Mike Baird and his government for them to consider for future policy actions.

The event, organised by Anjana Regmi, a PhD candidate from the Cosmopolitan Civil Societies (CSS) Research Centre at UTS, was well attended by people from various social and cultural backgrounds, ethnicities and countries of origin.

Dr Nina Burridge, Director of the CSS, began by introducing the 16-day campaign that originated 20 years ago with the motto “from peace in the home to peace in the world”.

Dr Burridge raised the basics: what are the essentials, what can be done, what have they achieved and how can we influence the global community to engage in improving women’s rights. She then mentioned Malala Yousef’s watershed 2013 speech and spoke about the critical need for the education of young women as well as for men.

CEO of Justice Equality Rights Access International, Carol Shaw was the keynote speaker of the day. “Often violence against women is driven by cultural contexts which is intertwined with economic, social and political factors,” Shaw said.

Shaw continued, “This results from the lack of implementation or monitoring of laws as well as the entrenched patriarchal values of society and structural injustices that help shape and encourage masculinity.”

The very apt discussion topic, ‘The right for all of us to live in dignity’, as part of the event, included inspiring comments from 10 speakers – eight of whom were women.

Divitah Nitsios, from the Community Migrant Resource Centre, moved attendees with discussions about sexual violence in Africa. “In the case of Rwanda, women’s rights and their dignity were stripped away. Mutilation was used as well. Women were gang raped on the streets. From sexual violence to terrorism, women had to suffer and witness torture and the killing of their families,” she said. “Some women died after they were raped and some were left alive to be tortured.”

Maha Abdo from the United Muslims Women’s Association addressed the differences between cultural and religious practices and how they affect the status of women in the Muslim community. Abdo is currently working on a model focussed on family restoration that has been through two tender processes at Bankstown Multicultural Services.

Matthew Tukaki, Co-Founder of the Sustain Group and EntreHub, emphasised how empowerment of both men and women is required for social change. Tukaki’s personal interest in female empowerment comes from his own mother who faced domestic violence back home in New Zealand. He spoke about how women are currently underpaid and the greatest means to empowering women is enabling them to run their own businesses.

The young speaker Neeraja Sanmuhanathan, a Torture and Trauma counsellor at the NSW Service for the Treatment and Rehabilitation of Torture and Trauma Survivors (STARTTS), gave a different perspective on torture against women during periods of militarism in the Sri Lankan context. “Women continue to face stigma from society every day, and they are not accepted as the sole breadwinner of the household,” she said. 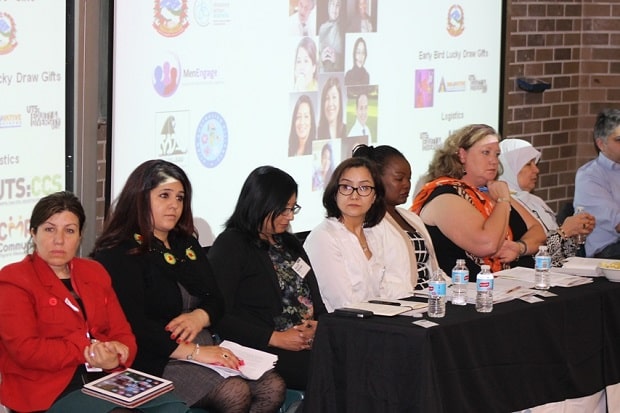 This session ended with Surbani Turmani from the Afghan Midwives Association. She spoke about how 85 per cent of women in Afghanistan are severely affected by gender inequality and violence through forced marriages, rape and victim blaming as well as being denied rights to education and health services.

Speaking at the event, Dr Mehreen Faruqi from the NSW Greens emphasised the gender gap in the context of Pakistan. Faruqi said she defied the patriarchal society through studying civil engineering, which is typically male dominated.

Faruqi’s speech addressed a range of issues including the 18 per cent gender gap between men and women in Australia. She compared the situation of women to the treatment of LGBTI communities facing similar discrimination.

Liberal candidate for Blacktown Raman Bhalla expressed his desire to empower women socially as well as financially, believing that small businesses are one of the key solutions to financial empowerment and boosting the confidence of women.

Sophie Cotsis MLC spoke about the specialist services available to oppressed women in order to escape violence, the need to protect survivors of child sexual assault, and the therapies available for drug addicts and alcoholics.

Adding to this, Kaila Murnain of the Labor Party, revealed that Australia ranks 49th in the world for female representation in politics. Murnain said that education is a great equaliser for promoting women and is necessary to encourage them into leadership roles.

In the Q and A session, Jesica Sharma and Arpita Singh from Yuva Australia, raised questions about how the basics of gender inequality can be overhauled. Jesica, a student at UTS, expressed her concerns about inequality in the workforce however, Arpita, a young web developer, said, “Empowerment has to be ingrained and asked for, it won’t just come.”