Results on the ground 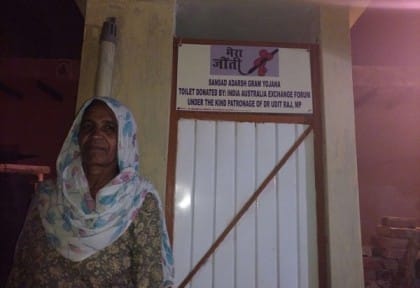 Thanks to funds raised at the Swachh Bharat Fundraiser in Melbourne earlier this year, residents of Jaunti village in the northern State of Haryana will now have six toilets available for personal use.

The Swachh Bharat (Clean India) Campaign was launched by Indian Prime Minister Narendra Modi in October 2014, with the aim of eradicating open defecation in the country by 2019.

The India Australia Exchange Forum (IAEF) raised over $16,000 to support the initiative at their inaugural fundraiser in February. IAEF had committed to supporting the construction costs of up to three toilets in Jaunti village which is under the patronage of Udit Raj, Member of Parliament in the Indian Lok Sabha.
“The residents of the Jaunti village are economically underprivileged. Out of 100 households, only five villagers have individual toilets in their homes. The rest resort to open defecation in the adjoining agriculture fields which is not only unhygienic but is also unsafe.  This seriously compromises the security, especially of the women and children who go out into the field under the cover of darkness, early morning or late evening, and therefore these toilets are absolutely critical,” said Amith Karanth from IAEF.
“In light of this, it is a tremendous outcome for the people of Jaunti. We have been able to deliver double the number of toilets than committed due to the generous support of Melbournians.”

Studies show that one in every 10 deaths in India is linked to poor sanitation and low-income households bear the maximum brunt of poor sanitation. Nearly 120 million toilets are required to be built in the country by 2019 to realise the vision of a Clean India.
Last December, the World Bank approved $1.5 billion to support the Swachh Bharat Abhiyan and has been actively working towards achieving the ambitious goals of this initiative.
IAEF, a not-for-profit organisation formed to facilitate bilateral relations, intellectual property transfer, education, trade, business and cultural exchange between Australia and Indian subcontinent, has been working very proactively to support this campaign. In their own way, members are working with a committed and passionate team of volunteers and Ambassadors.

Through the funds raised, IAEF has also been able to fund one RO water purifier at a public school and a waste management pit for Jaunti villagers. This will enable safe and clean water for the children in this school and a dedicated place for collecting all waste.
IAEF, in collaboration with the Buddha Education Foundation, has also conducted a ‘Sensitise to Sanitise’ (S2S) campaign to raise awareness and garner support in the following areas:
*Individual House Hold Latrines (IHHL) – one toilet for each family either attached or in close proximity.
*School Sanitation and Hygiene Education (SSHE) – Educating children and school authorities on sanitation and hygiene
*Behaviour Change Communication (BCC) – training to educate, create awareness of toilets and sanitation and drive behaviour change in rural communities including importance of using a sanitary unit and keeping it clean, how to change between pits after it fills up, important of sanitary habits such as washing hands after using the toilet etc.

IAEF has pledged to build 100 toilets in India over the next three years and will be investing in the second phase of constructing toilets from the remainder of the funds raised.
As Amith Karanth says, “The work being done at Jaunti should attract more people to come forward and contribute towards this important cause of Clean India as this is just the beginning.”