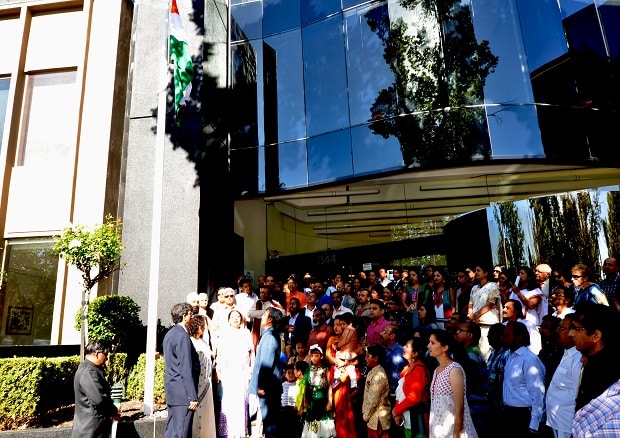 The Indian flag swayed in the wind as members of the Indian community sang the Indian national anthem. They were gathered for the short and simple Flag Hoisting Ceremony conducted by the Consulate General of India on India’s Republic Day (26/01). The new Consul General Manika Jain conducted the flag hoist and read out the 65th 2014 Presidential address to the nation on the eve of their Republic Day.

India’s Republic Day, 26 January 1950, is special as it marks the moment when the fully-fledged and permanent Constitution of India came into effect. It is the day when this special document assured its citizens justice, equality and liberty, and endeavours to promote fraternity among them. In addition, that day, sixty-four years ago, marked the end of British rule.

In his customary message to the people of India on Republic Day, the Indian President noted optimistically that 2014 will be the year of healing after fractured and contentious politics. The focus will be on the people. This is to ensure economic growth across all sectors, advancements in the education system and a continuing development of a harmonious society that is free from fear.

The short documentary played towards the end of the ceremony was indeed interesting. It showcased the handloom (khadi) weavers of India who, to this day, continue to practice the trade to sustain a living. As a part of everyday life for most Indian citizens during the freedom movement, hand-weaving was a route to emancipation and financial independence. The industry flourished after Independence, due to a lesser degree of foreign market competition, as they were able to provide good quality and low cost clothing to the locals.

The Kabir song Jheeni re jheeni chadariya played in the background; firstly in the beautiful Rajasthani dialect, and progressing to the modern version with a great electric effect. The transition, portrayed in musical composition and lyric, compares well with India’s progress in all walks of life. The respect shown towards India’s traditional ways is commendable.

The video emphasised how, despite differences developed over time in culture and politics, hand-weaving continues to flourish across all parts of India. It plays a pivotal role in ensuring economic growth of the less advantaged members. It is a trade that has not been disowned despite the hard work involved in doing manual labour. It is a daily practice that displays the fortitude of the Indian labourer and, largely, the strength of the Indian community to stand united over time. The weaving of the colourful threads into a finished cloth product clearly signifies that there is ‘Unity in Diversity’.

It can be seen that India has excelled after independence and she will continue to do so into the future. Historic practices are proving to be invaluable rituals. Although mastered over time, the hand-weavers still work with original mechanical design. Such dedication and mastery are fundamental in ongoing success. The Indian community does have the confidence, courage and commitment to achieve great things in 2014. As the Indian President concluded, “2014 will be a year of resurgence”.