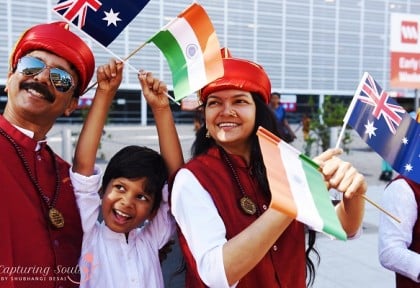 Saluting our Janmabhoomi as well as our Karmabhoomi

The date 26 January is always special for Indians. More so in Australia, since we get a holiday and are able to celebrate our country of origin and the country we have chosen to live in on the same day!

In Adelaide, the tradition of hoisting the Indian flag on Republic Day started only last year. So it was quite special hoisting it again on a make-shift pole and singing Jana Gana Mana standing under it. More than a hundred voices rose with the raising of the flag and it was a very special moment. The Australian national anthem was also sung and this was followed by speeches inside the Indian Education Centre Hall.

Dr Jagan Mazumdar AM spoke about the first Republic Day, giving an interesting historical fact why India chose to become a sovereign democratic republic within three years after independence. He then quoted from the first speech on this occasion by Nehru who said, “The flag under which you stand today and which you just now saluted, does not belong to any particular community. All those who stand today under the flag are Indians, not Hindus, not Muslims, not Sikhs, but Indians.” He also quoted Dr S. Radhakrishnan who in one of his Republic Day messages, told Indians “not to be prisoners of the past but be pilgrims of the future”.

Several others spoke including local Councillor Michael Iammarone who praised migrants’ and Indians’ contribution to Australian society and extolled them to participate more fully in business and other community activities. Lt Col Jatinder Singh Passan spoke very poignantly about how and why we celebrate Republic Day. Several other members in the audience spoke spontaneously about Republic Day as well as Australia Day and the importance of inclusiveness and contributing to society.
The morning came to a fitting end with samosas, mysore pak and lamingtons! And lots of time for everyone to mingle and get to know each other.
The main event for Australia Day in Adelaide is a multicultural parade followed by a public concert at Elder Park in the middle of the city. It has become tradition for the Indian Australian Association of South Australia to join up with another association to showcase a region of India. This year, the Shivagarjana Band from the Maharashtrian community took centre stage, playing traditional music on their dhols and tashas.

On the top of a truck, they played that beautiful rousing drum music that is so familiar in the streets of Maharashtra. The crowds watching the parade along the length of the main thoroughfare, King William Street, quite enjoyed the music and could be seen clapping along to the beat and even dancing along at times!
Maharashtrian ladies and children also came out in sizeable number, all dressed in beautiful saris and the children in traditional clothes. They made a wonderful contingent dancing along to the music.

Various Indian groups also took part in the Parade. The BAPS Swaminarayan Mandir had placards with value-based sayings; the Punjabi Association was resplendent in their traditional gear complete with kirpans; Tamilians had a large contingent led by a Jallikattu bull and with children dancing the Karagattam, Kavadi and other folk dances to their traditional percussion music!
ISKCON also made their presence felt with a beautiful Rath at the Parade, and ladies danced the Raas Garba to the singing of kirtans along with live music with dhol, cymbals etc.

The Indian contingent was very popular with the crowd with their bands, music and dance and, along with Vande Mataram and Bharat Mata ki Jai, when they yelled Aussie, Aussie, Aussie… the ‘Oi, Oi, Oi’ was the loudest!
A truly enjoyable 26 Jan in Adelaide – Republic Day with flag hoisting in the morning, and Australia Day with Parade, music concert, one-day cricket match and fireworks at the end with a barbecue lunch in between… What a typically Aussie holiday!