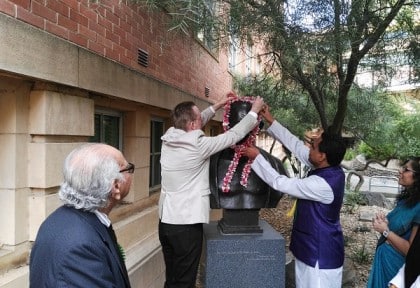 Be the change you wish to see in the world. How many times have you heard these words and not quite put your finger on the orator of such wise words?
We should not forget the great men and women who revolutionised and challenged the world with mere words, influencing and shaping our lives!
It’s for this very reason that we mark Gandhi Jayanti every 2 October. Mahatma Gandhi, the orator of the above inspirational quote, and many similar sentiments, touched the lives of many, not only in his own country of birth, but all around the world. He was the architect of using non-violent means to achieve the freedom of India from colonial rule. Decades after his death, he remains the messiah of peace and non-violence.
He famously said, “An eye for an eye will only make the whole world blind.”
And, “You must not lose faith in humanity. Humanity is an ocean; if a few drops of the ocean are dirty, the ocean does not become dirty,”
How to be more magnanimous than to forgive a perpetrator violence? As he said, “Forgiveness is the attribute of the strong. The weak can never forgive.”
Gandhi also championed, throughout his life, the importance of following a righteous path and fought for civil rights -“First they ignore you, then they laugh at you, then they fight you, then you win.”
He remains one of the most influential people in modern history amongst not only Indians, but indeed the world.

The Indian Australian Association of South Australia (IAASA) organised a celebration of Mahatma Gandhi in Adelaide on Gandhi Jayanti. His life was celebrated by a group of people representing the huge numbers around the world who are greatly influenced by Gandhian philosophy.
The venue was a peaceful little garden outside the Barr Smith Library of the University of Adelaide’s North Terrace campus, where a bust statue of Gandhi sit proudly. Its serene but secluded location means that not many people come across the statue and are routinely unaware of its existence. This celebration brought the statue, and the man, out of the shadows.
This bronze sculpture, created by sculptor Gautam Pal from India, was donated to the University of Adelaide by the Government and people of India in January 2012. It was personally delivered by the then Consul General Amit Das Gupta to the Vice-Chancellor of the University, Prof. James McWha in a ceremony attended by many influential leaders. The cute little garden surrounding this statue has been aptly named the Garden of Contemplation.
The 2 October ceremony was attended by the Lord Mayor of Adelaide Martin Haese, along with Lady Mayoress Genevieve Theseira-Haese, who paid his tribute to the silent revolutionary who changed the world with only the weapon of the words. Mr Haese garlanded the bust with fresh flowers followed by Adi Reddy Yara, the President of IAASA. In his speech, Mr Haese stressed the importance of peace in today’s world and the need to learn from the life of this great inspirational figure who taught the world the lesson of following truth, peace and non-violence.

The quotes of the great man were remembered and his contribution to the world was recollected also by Senthil Rajan, a recent migrant to SA, who shared some rarely known facts about Gandhi. For example, not many of us know that Gandhi gave importance to, and insisted on, educating the masses on the value of great customer service which is given much worth in today’s modern world. “The best way to find yourself is to lose yourself in the service of others,” he quoted.
Professor Jagan Mazumdar AM, a well-known Adelaide personality, who was a pioneering member and one of the originators of IAASA, talked about the need to continue this kind of gesture as an annual event. He suggested the organisation take it further by organising to invite a knowledgeable and educated speaker in Gandhian philosophy from overseas to impart Gandhi’s messages to the people of South Australia, in particular the youth and students. The other guests agreed with Prof. Mazumdar and the Lord Mayor gave his promise to help in organising such events in future.

The presence of Gandhi’s sculpture in this seat of education seemed to convey a special and powerful message. In recent years, South Australia has been a key destination for Indian students looking for quality education and some continue to make South Australia their permanent home there-after.  South Australia, in particular The University of Adelaide, has strong ties with India in a number of areas such as business, sports, education, research, staff and student exchange. Having a constant reminder of Gandhi at the campus is a constant inspiration for Indian students to continue their closeness to their culture and roots.
For a great man who said, “My life is my message”, having his sculpture in a place of learning is a constant reminder of his messages. It is just hoped that such events would take place more regularly and with more impact for people of South Australia.