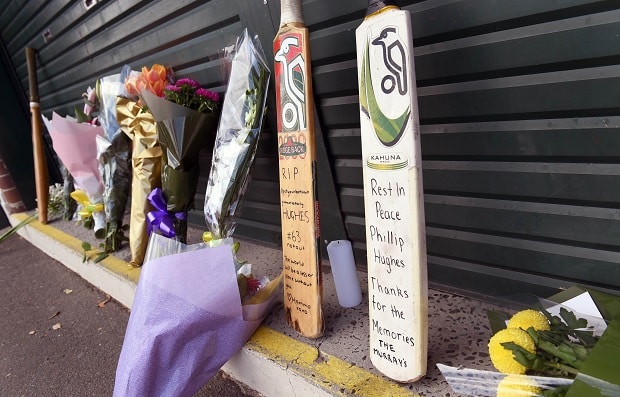 Tributes poured in for Australian batsman Phillip Hughes who passed away on 27 November after a freak accident during a Sheffield Shield match at the SCG.

Hughes, who would have turned 26 on 30November, passed away two days after being struck by a bouncer bowled by Sean Abbott.

Although he was hospitalised immediately, he never regained consciousness.

Sydney’s Sanjiv Dubey remembers Phillip Hughes as a “little fellow who came to class with a massive kit bag”. As a Year 12 student at Homebush Boys High School in 2006, the late cricketer was a student in Dubey’s PDHPE class.

“Of course Homebush Boys is famous for that kind of thing. On a regular day, you’ll see some 30 to 40 of those kit bags. But Phil stood out because he’d come straight to the front of the class with his! He also stood out because of other characteristics, mostly his attitude in class. He would listen and learn, and was keen to make an effort,” Dubey said. “The other sportsmen in my class would sit at the back, and yes sometimes nod off too, but not Phil. There’s a handful of kids over the years that I’ve picked as ones who would go on and make a mark, and Phil was one of them.”

Both were picked for the NSW Under-19 side in the Australian Championships in 2006. The team took the trophy for the fourth time that year.

“I remember that tour to Adelaide very well,” Jay Poria told Indian Link. “Phil was always upbeat, and could be pretty naughty too!”

Jay admits to feeling distraught when he heard of the freak accident at the SCG, but remembers his time with Phil fondly.

“If I had to pick one quality in the man, it would have to be his strong determination. Even when his technique was questioned while trialling, and later when he was dropped because of it, he was very determined to get back up, and come back stronger. And when he got back into the Under-19 team, he came back with a century, and a big one at that.”

People across the world paid tribute to the Australian cricketer by putting out their bats and posting photos to social media with the hashtag #putoutyourbats, a movement begun by the user @Squizabilly.

The man behind the account Paul Taylor tweeted, “#putoutyourbats isn’t about me. It’s just a way for all cricketers to show their respects to Phillip Hughes. We’ve all played cricket in one way or another. Backyard or beach cricket, no matter what level, we’ve all grown up with a bat and ball. This is our way to connect and show our sadness. Thoughts also must go to Sean Abbott.”

The currently touring Indian team released a statement that said: “We cherish the memories of playing along with him and deeply respect his contribution to the game of cricket.”