Recognising the best in local business 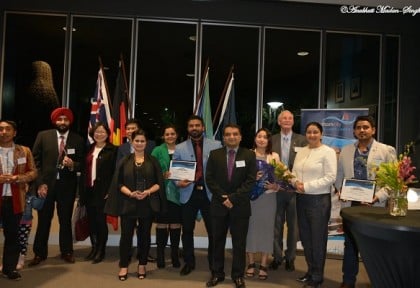 Four local businesses in Asian grocery, autocare, confectionery and gardening have taken out the inaugural Multicultural Entrepreneur Awards organised by the Wyndham City Council.
Wyndham is well known for its multicultural populace, with 25% of its people coming from countries where English is not the first language.
The Awards were formulated with the sole idea of promoting and acknowledging the efforts of multicultural entrepreneurs based in the Wyndham area. They felicitated those who started their businesses from the ground level, worked through challenges, and grew their businesses to where it is today. The judging criteria were based not merely on the success of the businesses, but also on the entrepreneur’s journey, including why they started the business, obstacles they had to overcome and risks they’ve taken, their creativity and innovation, their future vision, their self-development, even their community focus.
The awards ceremony was held in early July.
The stories heard on the night were truly inspiring. The journey of each entrepreneur, their hard work and entrepreneurial skills were applaud-worthy. Each story displayed courage, passion and tenacity.

The awards were divided into two categories: Established (businesses operational for more than 12 months) and Emerging (those that have been running for 12 months).
This year’s winners in the Established Category were Ms. Ta Eh Paw Palay of Tau Meh Pa Kla, and Mr. Harpreet Singh Bedi of BDS Autocare
Ta Eh wanted to create her own opportunities after arriving in Australia and has established a successful Asian grocery shop. She is also helping younger generation by work placements.
Harpreet arrived in Australia in 2007 and studied Automotive after which he worked as mechanic up until in 2014, when he set up his own business, BDS Autocare. In the last two years, he has grown his business because of his positive customer relationship.
This year’s winners in the Emerging Category were Ms. Diksha Khanna of Amazeology Australia and Mr. Jacob Thang of Jacob’s Garden Maintenance.
Diksha came to Australia 10 years back and worked in the corporate sector promoting confectionary products until she established her own business, Amazeology Australia, which creates personalised marshmallows, macaroons and fortune cookies by printing customised designs on them.
Jacob came to Australia in 2013 as a refugee. Since then he has coordinated the development of a local gardening social enterprise along with his own gardening and landscaping business, Jacob’s Garden Maintenance.
Cr Gautam Gupta, Wyndham’s Cultural Diversity Portfolio Holder said at the event, “The program has been a success based on the overwhelming response we received at the nomination stage. And today as well, when each of the winners had tears of joy when they received the honour.”
He added, “All the winners today demonstrated exemplary skills and creativity which has contributed to the growth of Wyndham.”

The aim of the Multicultural Entrepreneur Awards is to celebrate the contribution that newly arrived migrants make to the welfare of Wyndham economy through their creativity, innovation, resilience and community focus. The Council hopes that these awards will encourage others to start their own businesses and contribute to the local economy.

Innovation occurs in its best and purest form when there is scarcity of resources. That the migrant entrepreneur has a fresh perspective which someone who has been born and brought up here wouldn’t have, was the common thought on the floor.
Diksha Khanna, Entrepreneur of the Year (Emerging Female) said, “What an amazing night. This is wonderful encouragement and it means that we can go on with our vision, in our business. My award is really special as it acknowledges my journey as an entrepreneur.”
Julia Truong of JT Production Managements agreed, “It’s such a great opportunity and initiative to encourage other entrepreneurs.” Her advice to new entrepreneurs is, “It’s a tough road so keep trying and keep working hard. There will be difficulties but follow your passion.”
Ravneet Kaur of Santwissen Australia, another nominee, said, “It is truly inspiring to be nominated for an award here. I appreciate the effort the Council is putting in to recognise our hard work and creativity.”
Although most attendees did acknowledge that Council’s initiative in instituting these awards was commendable, there were some concerns about the judging process and the criteria. The nominees felt that there the number of applicants considered for each category was high, as was the vast diversity in the industries these businesses operated in. Some also felt it wasn’t fair to be equated at the same level and a few more categories could be introduced to acknowledge entrepreneurs working for the welfare of the society through innovation in their businesses.
The hope is that these issues will be ironed out as the program evolves in coming years.
Each of the winners this year received a trophy, one year’s membership of the Wyndham Business and Tourism Association, two tickets to the Wyndham Business Awards to be held in August, and a free two-hour business planning consultation.