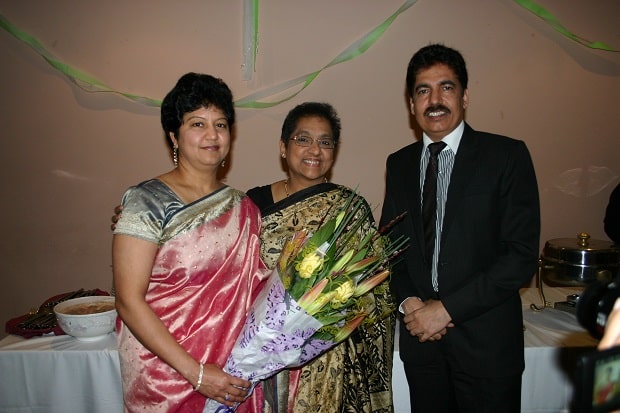 The Indian Australian community in Melbourne bid farewell to Consul (SCWO) of India Mr Rakesh Kawra, at an event organized by the Federation of Indian Associations in Victoria (FIAV). Mr Kawra is expected to take up his new assignment in Cairo (Egypt) shortly.
The farewell dinner was held at Tandoori Junction Indian restaurant in Glen Waverley, recently.
It is never easy to say goodbye, more so if the person leaving is as community-minded and supportive as Mr Kawra has been.  His popularity was evident from the heartfelt farewell wishes that he received from the guests.
Leaders and representatives from various organisations deeply appreciated Mr Kawra’s contribution towards strengthening relationships within the Indian community in Melbourne. He was also commended for his efforts in improving bilateral relations between India and Australia. Amongst the speakers were FIAV President Mr Vasan Srinivasan, CEO of Yarra City Council Vijaya Vaidyanath, President of FIWAA Mrs Madhu Dudeja, and Leigh Tran from Victorian Police Multicultural Unit.  Tonee Sethi from G’Day India, Neeraj Nanda from South Asia Times and Preeti Jabbal from Indian Link represented the media.
President of Hindi Niketan Dr Shard Gupta, President of Telugu Association Mr Pavan Matampally, President of Gujarati Association Bharat Shah and President of Melbourne Malayalee Federation Dr Shaji Varghese were unanimous in their acknowledgement of Mr Kawra’s exceptional service during his tenure in Melbourne. Special mention was made of his willingness to assist the community in matters related to travel visas and emergencies.
Mr Kawra thanked the speakers for their wishes and said that he was overwhelmed with the respect and warmth that he had received from the community in Melbourne.  “I have been posted to many different parts of the world, however, I will always cherish my experience in Melbourne as one of the best I have had so far,” he said.
Mr Kawra went on to commend the FIAV and its leadership under President Mr Vasan Srinivasan, for their commitment towards bringing the Victorian Indian community together. “Ever since my arrival in Melbourne, my interaction and experience with the FIAV has been parallel to none other,” he said. According to Mr Kawra, he hoped to see more organisations and individuals in Victoria, like the FIAV, that are dedicated towards uniting and strengthening the Indian community in Australia.
Mr Kawra’s wife Mrs Mona Kawra and his daughter Richa accompanied him to the farewell dinner. Beyond his official duties as the Consul, Mr Kawra has made many friends who will fondly remember him and would like to see him return to Melbourne at some stage. As one of the guests Mrs Shobha Gupta said, “We hope you return either on another official assignment or to retire peacefully in the most liveable city in the world. Till then it is not goodbye, it’s just fare thee well and hope our paths cross again”.