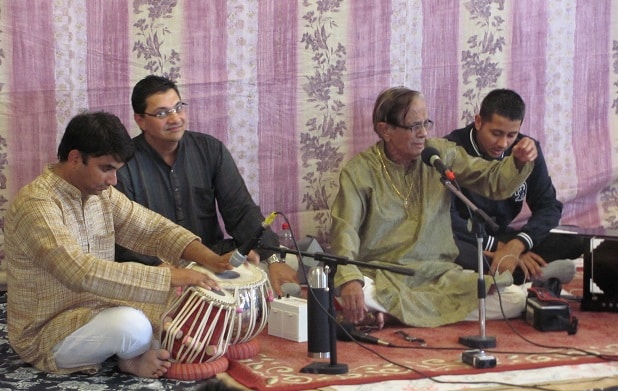 A hundred avid lovers of Indian classical music were privileged to hear Pandit Babanrao Haldankar, prodigious amongst Hindustani classical vocalists of India, perform in Melbourne recently. Delighted on hearing of the local populace’s musical discernment, Pandit Haldankar readily agreed to present raagas that are sung around 10am, at an experimental presentation organised by the Sharda Kala Kendra.

Beginning the morning with raag Ram Kali, Panditji initiated Bara Khayaal. While explicating the discipline that governs the ‘khayaals’, he progressed into Chhota khayaal; some of which I last heard in India decades ago. Of ripe age and slender built, Panditji boasts unfaltering lungs, a sturdy voice and in his addictive style, he softly ushered the khayaals into taraana territory, continually frolicking with the competent Panduranga, on the tabla, and motivating him to portray his talent as well. “One simple madhyam to raag Bhairo”, he elaborated, “and it converts itself into raag Ram Kali”. The khayaals and taraana took over an hour and indeed, we wished that they would continue unabated. However during the performance, Panditji would present salient anecdotes of his illustrious past.

Elegant Ranjana Goel was MC for the day; Raashid Sultan Sahib who is roaming the Motherland, admitted that she was not quite conversant with the demands of her position, yet she handled the day appreciatively, even allowing us a Bollywood song refreshment break that began and ended in all of three minutes. When we returned, she pointed out that we took a ‘movie’ break!

Now was the time for raag Allaiyya Bilawal, which I am certain with the exception of Guru Deepika Shome and Guru Hemant Umranikar of present company, none of us had ever heard before. Presenting his talent enjoyably and effortlessly, Panditji’s demeanour remained jovial. In between, he deviated from the task at hand and presented a brief vartalaap between Lord Krishna and Radha. He also briefly sang raag Bhairavi on Jhap taal for our pleasure. Seated behind him, two of his protégé replicated the raagas he sang, with the pre-recorded tanpura as accompaniment invigorating the ambience further. Prasad Karvé on harmonium followed the raagas proficiently. Absolutely enchanting!

Panditji has performed in prestigious conferences like Tansen Samaroh and also in the USA, Australia and New Zealand. He has composed 250 catchy bandishes, many of which have been adopted by renowned musicians like Pt Rajan Sajan Mishra, Smt Ashwini Bhide Deshpande, Smt Devaki Pandit – a disciple of Pandit Haldankar, Pt Jitendra Abhisheki and many others. He has also received numerous Awards including the Kaka Hathras Award for music literature in 2002, the Maharashtra Government Award in 2007 and the Sangeet Natak Academy Award in 2012, among others.