Putting Ted on a pedestal 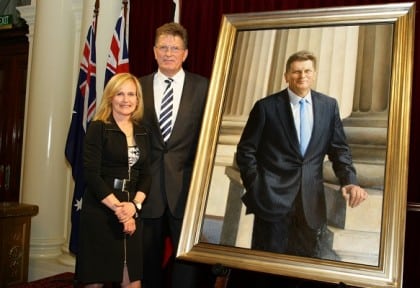 After having refused previous requests to sit for an official portrait, former Victorian Premier Ted Baillieu finally agreed to have his portrait painted for historical records. During the unveiling of his portrait at the Queen’s Hall of Victorian Parliament recently, Baillieu admitted he was bit of a reluctant start for this event. According to Ted Baillieu his family and friends convinced him that it was not about him as much as it was about legacy, history and everybody he might have connections to.
Baillieu’s wife Robyn and his family were special guests at the event along with many Parliamentarians and the current Premier Daniel Andrews. The life-like painting was created by Sydney portrait artist Sally Ryan. Winner of Kennedy price 2014, finalist for Archibald Prize 2013 and Black Swan portrait Prize in 2013 and 2015, Sally is noted for her art and her focus on portraiture.


In his welcome address, Telmo Languiller Speaker of the Legislative Assembly briefly outlined the history behind the premier’s portrait gallery.
“In the rough and tumble of life in politics people do not often put leaders on pedestal and I am so glad that we honour our leaders with a portrait as part of this historical collection in the Parliament,” he said.
Currently there are 18 Premiers’ portraits held by the Parliament of Victoria, many of the recent ones displayed in the Queens’ Hall. Frederick Grimwade, President of Legislative Council between 1979 and 1985, initiated the tradition of displaying portraits of Premiers of Victoria. Every Premier since 1933 is represented in the historical collection except Ian MacFarlan who was premier for 51 days.
At the unveiling of Ted Baillieu’s portrait, speaker Telmo Languiller said, “We recognise the great contributions Ted Baillieu has made to our state. He will always be recognised for his work in the multicultural space in championing diversity, inclusion and for doing so proudly, passionately and with genuine conviction”. Prior to retiring from politics Baillieu was member for Hawthorn from 1999 to 2014 and Premier of Victoria from 2010 to 2013.

Acclaimed artist Sally Ryan who was commissioned to create the portrait of the 46th premier found him to be easy to work with, with an ‘easy going nature’. As a contemporary realist-painter Sally wished to capture the likeness of her subject but also reveal some of his affable nature, his interest and background in design and architecture and the long association of his family in the Victorian Parliament.
“I think Sally managed to capture the essence of Ted’s personality well in this portrait,” said former ministerial advisor and businessman Nitin Gupta.
He added, “Ted is commonly referred to as a ‘Friend of India’ due to his ongoing involvement and engagement with the Indian Community. Before he was elected as Premier, during his tenure and even after he is no longer in power Ted continues to support the Indian community. I find him very approachable and inspirational.”
- Advertisement -
Share
WhatsApp
Facebook
Twitter
Linkedin
Previous articleSupporting safer sanitary conditions in rural India
Next articleBapu visits Queensland