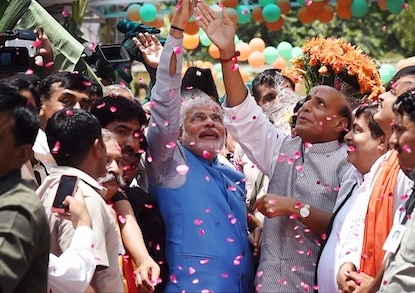 As India makes way for a new BJP-led government, with the elections keenly followed by major world powers, foreign policy experts say the regime change is a signal to the world “that the world’s largest democracy is alive and kicking” and that the thumping majority gives Prime Minister Modi the mandate to rework and repair relations.

Former envoy Hardeep Singh Puri, who joined the BJP earlier this year, said the overwhelming mandate “gives Mr. Modi the mandate required to repair the relationships in the neighbourhood and rework other critically important relationships like those with the US and China”.

“Prime Minister Modi will have the flexibility and space to pursue India’s interests and ensure that India can contribute to global peace and security in a manner commensurate with India’s size and potential,” Puri, who served as India’s Permanent Representative to the United Nations and is likely to play a foreign policy role in the new government, told IANS.
According to former envoy G. Parthasarathy, the poll result “sends a signal to the world that the world’s largest democracy is alive and kicking.”

He furthered, “The success or otherwise of foreign policy will depend on how our economy surges ahead… Automatically, foreign policy will be in order when it becomes clear to the world that India is set to grow and welcomes foreign investment and collaboration”.
The former envoy to Pakistan and Australia said, “Most foreign investors have lost confidence (in India). Because of mismanagement of the economy, defence spending has fallen to a record low; this has affected our national security adversely”.
He added that India has problems in the neighbourhood which “have to be imaginatively addressed”.

Parthasarathy said despite the BJP winning a simple majority on its own, in a federal set-up in dealing with Sri Lanka the government will have to have consultations with Tamil Nadu.. With Bangladesh, the views of West Bengal and Tripura will have to be taken into account.
Well-known strategic analyst C. Uday Bhaskar told IANS that “One area where the BJP will have more freedom is in relation to the immediate neighbourhood, where in the past some state governments and dominant regional parties hobbled the centre. Tamil Nadu in relation to Sri Lanka and West Bengal apropos Bangladesh are a case in point. With Pakistan, the Modi line is that he will not be a prisoner of the past but the terrorism issue will have to be addressed”.

Bhaskar, a distinguished fellow with the Society for Policy Studies, also noted, “As regards the other elements of India’s foreign policies – whether China or the USA, a much more visible political context and content is on the cards. But as always, national economic resilience and the strength of the Indian rupee will be the bedrock of the credibility of Delhi’s external policies”.

Former envoy Pavan K. Varma said it is “too early to say”, adding “foreign policy is a complex issue, it needs to be run on a planned framework and not on the basis of sentiment or emotion or jingoism.”

The Bharatiya Janata Party in its election manifesto had pledged to “revise and update” India’s nuclear doctrine. It had observed that the strategic gains acquired by the party-led National Democratic Alliance regime were “frittered away” by the Congress, and said its government would stress on “mending equations” and ties with neighbours.

Every third newly-elected MP has a criminal case

The number of parliamentarians with criminal cases has risen in the 16th Lok Sabha, with every third MP-elect facing criminal charges, an analysis of their election affidavits has shown.

An analysis of 541 of the 543 winning candidates by National Election Watch (NEW) and Association for Democratic Reforms (ADR) showed that 186 or 34 percent of the newly-elected members have disclosed criminal cases against themselves in their affidavits.
In 2009, 30 percent of the Lok Sabha members had criminal cases registered against them. This has now gone up by four percent.

The analysis also showed a rise in the number of crorepatis (millionaires) in the Lok Sabha over the 2009 election.