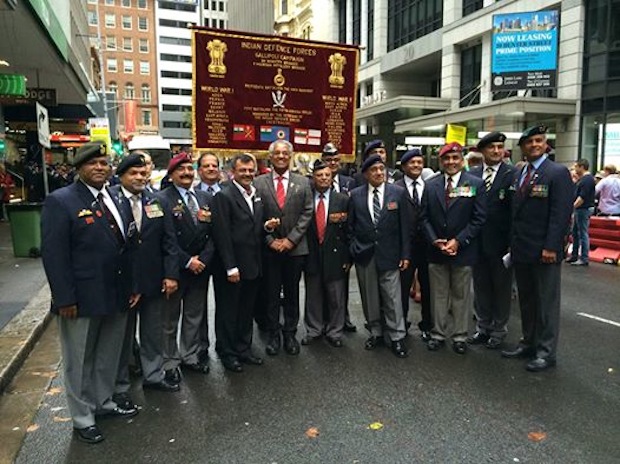 Reading Time: 4 minutesA myriad of thoughts and emotions surface as one spectator follows the ANZAC Parade from the sidelines

It was yet another eventful Anzac Parade for the retired veterans of the Indian Armed Forces in Sydney. The representation has grown since last year and they hope that this trend will continue with the size of the Indian contingent getting bigger every year. What was even more heartening was the cheers and the applause the marching contingent received from the enthusiastic spectators lining the streets braving the wet and cold weather. The Indian banner stood high and proud, ably and graciously carried by a scout. Joined by their families and friends, the retired officers from Army, Air Force and Navy marched in unison, their suits adorned with their service medals. While they matched step with step, ‘stomachs-in, chest-out’ as instilled during their training days, the different berets symbolised the Corps or the Arm they represented.

The untold sense of excitement was not dampened by the downpour. To be in the midst of it all, to participate in such a sacred and emotional ritual was indeed mind-blowing. There was an air of celebration and nostalgia, there were both tears of joy and grief – joy at what the ‘fallen’ had achieved and grief for the absence of the ‘fallen’.

As I briskly wove my way through the crowd trying to keep up with the moving parade and capture as many moments as possible through the lens of my camera, there were a myriad of thoughts and emotions racing through me. Why were we all there – the serving troops, the retired troops, the families and relatives? Was it all about patriotism and if so what is patriotism? Does enrolling in the armed forces mean you are patriotic? How do the civilians (as the ‘faujis’ call the others) exhibit their patriotism if it exists today?

When an individual enlists in the armed forces, he does so to protect his nation, the freedom of its tenets, interests and beliefs. He enlists because he believes in a cause, he believes in the values his nation was founded on and he is ready to lay down his life to uphold these beliefs. The problem is when the people governing the nation deviate from these founding principles. So then is it legitimate to call upon the individual to fight for and protect a cause that is now far removed from his own? Going against the government – would that make him a traitor and unpatriotic?

The loss of a soldier in the throes of war has emotional implications not only to his immediate family but the society on a whole. Who is a soldier? It will be interesting to gauge society’s take on this. Casting our eyes on what is happening around the world, the current scenario in Syria, the 2011 uprising in Egypt and Tunisia, raises many questions: are the soldiers in these cases fighting for a cause or a regime?

In the quagmire we call the global village today, often ideals, ideologies and beliefs are in constant battle with each other. People cross boundaries for various reasons, but the battles waged in their countries, be it social or political continue to hound them. They are often ready to risk their lives and return to support a cause they believe in, this may even be against the ruling government. Is it patriotism that motivates them? My concept of patriotism or ‘desh-bakthi’ while growing up in India was, protecting our borders from foreign invasion. And so as a young student of Indian history, the acts of the Indian soldiers in the British army always perplexed me – how could be they be so cruel to their Indian comrades who were fighting the war of independence? Does that belittle their loss of life because they were fighting for a regime and not a cause?

As we honour the fallen heroes of yester years, it is indeed time to look around the world we live in where nationalism and patriotism have assumed quite confusing connotations. In the words of Theodore Roosevelt, “It is unpatriotic not to tell the truth”. ANZAC Day remembers our fallen heroes who fought in the service of their nation, against oppression and the cause they believed in – to protect and ensure the safety of their family back home. Lest we forget.

(P.S. All veterans of the Indian Defence Forces who would like to take part in the ANZAC Parade, please send your service and contact details to veyunni@hotmail.com)