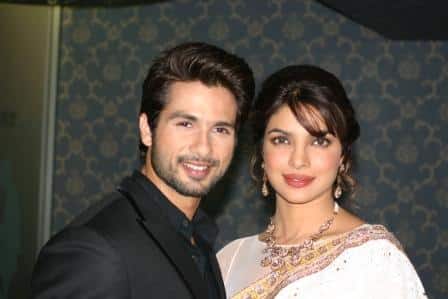 This winter, I got converted! I don’t know if it was the endearing laugh lines around his eyes or his devious smile, or the fact that he had a great sense of humour – whatever it was, I am now officially a Shahid Kapoor fan. Maybe not the screaming, swooning variety that came to see him in Hoyts Melbourne Central, but definitely someone who will take an interest in the trajectory of this young man’s career. Sporting very casual clothes, an unkempt look, a sinister stubble and floppy fringe, Shahid was boyishly affable and a delight to interview.

Equally, if not more charming, was Shahid’s ex ‘Piggy Chops’ (what an awful nickname for someone so gorgeous) who accompanied him to promote their upcoming release Teri Meri Kahani at the opening night of the Indian Film Festival (IFF) in Melbourne. There was nothing laidback about actress Priyanka Chopra, from her choice of somewhat inappropriate-for-winter clothes to her carefully applied make-up, to her well-thought-out answers. With a svelte figure to die, for she is hip and happening and she knows it!

Leading the promotional team of TMK was Writer/Director Kunal Kohli accompanied by Producer/Director Vicky Bahri. Obviously the press conference and interviews were predominantly about Teri Meri Kahani and the IFF; however, in what can only be termed as a crazily hectic day, I managed to get some insight into the creative people behind the movie whose tagline is, ‘Thrice upon a love story’.

I started the interview with Shahid who thankfully took his eyes away from his phone to answer my questions, the first one of which related to his penchant for comedy, despite his past roles as a dancer, romantic hero, among others. So what’s stopping Shahid from exploring comedy as his forte? “This has been on my mind for some time now. Earlier I did not realize I was funny, but a lot of people have told me I am. So maybe I should become a ‘funnyman’,” replied the star with a mischievous grin. “It will be an interesting transition to move from grey (roles like Kaminey and Badmash Company) to funny,” he added. “I am more than happy to do something that will make people laugh because that is why we make films – to entertain people and to make them forget the drudgeries of life.”

I took time to delve into Shahid’s lineage, as the maternal side of his family include some renowned literary figures. (His maternal grandfather was Anwar Azeem, a noted Marxist journalist and author. His great great grandfather was the film director, screenwriter, Urdu novelist and journalist Khwaja Ahmad Abbas more popularly known as K. A. Abbas. His mother Neelima is the daughter of Anwar Azeem, one of the greatest Urdu writers. K.A. Abbas in turn was the grandson of Hali, the chief protégé of Urdu poet, Ghalib). Does Shahid feel the urge to write, perhaps share a story in his mind? The talented actor was convincing in his response. “At the moment I do not have the time or inclination to think of writing. There is so much to learn, and I have just begun to discover myself as an actor and as an artist.  Unlike acting, writing needs a lot more time and thought. As an actor I have the support of my writers and directors and for now I am happy to speak lines written by others,” Shahid stated candidly.

So why has he been quoted recently as ready to take on more roles and films, rather than being picky about his choice? Why the compromise of quantity over quality? Shahid shared a secretive smile with Kunal Kohli, sitting besides him. “It’s not like that at all,” he explained. “When I said that I had just finished filming for my dad Pankaj Kapoor’s film Mausam, which took about a year and a half to complete. Another project I was to work on got postponed, and I was bored doing nothing. Since the past 8 years I have worked 90% of the time and have been very busy, so I am not used to not working. When Mausam ended, I was happy to consider more work.”

I moved on to Vicky Bahri, the producer of TMK, known for his distinctive visual style. He has helmed over 45 commercials, 6 major tourism films as well as fiction and non-fiction TV. I asked Vicky how he defines a successful film, and how it is different from a hit film.

“A successful film has both box office appeal and critical acclaim. Ideally that’s the kind of film anyone would like to make, whereas hit films may not have critical acclaim and appeal purely to the masses,” Vicky replied.

My next question was for award-winning director Kunal Kohli, who won deserving accolades for films like Fanaa and Hum Tum. How did Kunal feel about the new type of cinema originating from India, which has critical acclaim and also appeals to an Indian and international audience, for example, Anurag Kashyap’s Gangs of Wasseypur. Would he consider this emerging genre of films, or stick to safe commercial movies, I asked. “There is nothing like a safe genre, no film is safe to make. If that was the case Mujhse Dosti Karoge would have been a blockbuster: it had all the safe ingredients,” replied Kunal.

“In the past I have dabbled with different films, including a children’s film, but it was not successful. I like to stick to what I believe in. I am versatile and I can make all types of films, but for now I am happy to stick to the ones that are commercially viable. If my belief changes tomorrow, so be it,” he added with disarming candidness.

And finally, it was time to speak to the gorgeous Priyanka Chopra, having saved the best for the last. This talented actress will feature on an upcoming album, so I asked her what songs she would be singing. “Yes, I have recorded a pop album to be launched soon,” admitted Priyanka. “India is a huge community and music is an integral part of our culture; however currently there is a lack of international pop acts from India. This album presented an interesting concept for me and initially I was not sure about it, but I have always wanted to sing and this seemed like the right time to try something different. I am very clear that my music should be reminiscent of where I come from. I want people across the globe say, ‘Hey, that is Indian’. We have so much potential and talent, I am hoping this will encourage more people to bring out their talent in pop culture”.

Priyanka will soon play a challenging role of an autistic person in upcoming release, Barfi. How did she prepare for this role? “Barfi is a comic/thriller caper about an autistic girl. Autism has a huge variant, people suffer from various forms of autism. My role is that of a severely autistic girl and that came with its challenges. I did a lot of research for Barfi, I met a lot of parents and went to many schools. It’s almost tragic that the shooting has ended as I loved the role a lot. It is not a serious film with a serious message; it is about hope and love of real people who live with a disability. I think Barfi will be a very different take on people with special needs”.

And what about the additional Chopras making a foray into Bollywood, like her cousin Parineeti Chopra? Do they come to you for guidance? “I am delighted to see youngsters from my family joining the industry in various capacities. We are trying to create the ‘other’ Chopras like the Yash Chopra clan and the Kapoor family,” said Priyanka with a disarming grin.

“I am always there to guide my family if they want to create their niche in the film industry. Eventually, nothing can happen without destiny and they all have their own destinies to follow. It means a lot to me to be able to be in a position to help and guide them, and I always will,” she added on a more serious note.

So which role would this multi-faceted actress really want to play? “A courtesan movie has everything – music, dance, beauty, glamour, sexiness. I think every actress would like to play the role of a courtesan and I certainly would love to do so,” said Priyanka with a faraway look in her eyes. “I would also like to do a full-on action movie. They are two extremely different roles that I would really want to play, given the opportunity”.

Priyanka and Shahid may deny their relationship; however they had an easy camaraderie that only comes from familiarity. Shahid jumped at any opportunity to pull Priyanka’s leg, and they laughed and joked with each other throughout the interview.  Speaking to them made me realize just how media-savvy these young stars have become. They seemed unfazed by the hours of grilling from various media representatives, but they visibly relaxed when I concluded our chat and they left to get ready for the opening night of the festival. It is admirable how they manage to pack in so much on a tight schedule and still manage to smile. I guess that’s what makes them true stars!