Pollies reach out to the community 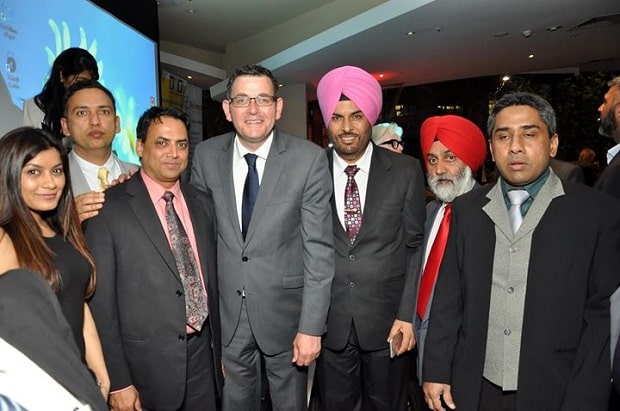 In the lead up to the election, politicians are embracing their friends from the subcontinent, write CARL BUHARIWALA and KIRA SPUCYS-TAHAR

A handshake, a conversation, a flash. The extraordinary presence of 23 Members of Parliament, eight candidates and 10 councillors, standing together with members of the community, recently launched the group Subcontinental Friends of Labor, Victoria (SFOL). This well-timed gala dinner and networking event took place with approximately 450 supporters of the Australian Labor Party (ALP).

With the Victorian state election to be held on Saturday 29 November, the mass congregation was a positive and uplifting indication for Leader of the Labor Party and federal Leader of the Opposition, Bill Shorten. It was even better sign for Daniel Andrews, the Victorian State Leader of the Opposition and Shadow Minister for Multicultural Affairs. The pair were joined by federal Shadow Minister for Citizenship and Multiculturalism, Michelle Rowland who told the crowd she was looking forward to Prime Minister Modi’s upcoming visit.

The SFOL is a multicultural community consisting of members from a South-Asian background who value Labor’s aims.

Acknowledging the achievements of those who have contributed extensively to the Australian community, the SFOL presented a series of awards. Those recognised included Kulwant Joshi, Professor Supriya Singh, Captain Dr Sandeep Bhagat, Satnam Pabla, Mohammed Masood, Dr Sonia Singh and Dr Santokh Singh. It seems Labor is aware that strengthening ties with voters from the subcontinent is essential for Australia to excel in the future.

It was reassuring to see Labor members interact with their supporters from various religious and cultural backgrounds, particularly in light of their views on the contentious asylum seeker debate.

Daniel Andrews took the opportunity to remind the Victorian constituents of state Labor’s key policies for the upcoming election. He networked among supporters along with other Shadow Ministers and Members of Parliament, including Telmo Languiller MP (Shadow Parliamentary Secretary to the Opposition Leader), Mark Dreyfus QC MP (Member for ISAACS), Tim Watts MP (Member for Gellibrand), and Liz Beattie MP (Member for Yuroke).

Senator for Tasmania, Lisa Singh, addressed guests and noted her recent visit to India with Tanya Plibersek MP. Senator Singh said that she did not want to be the last senator of a subcontinental background and urged attendees to spread the message of Labor’s values and find those who are representatives of their communities to stand for election and join Australia’s vibrant parliament.

Mr Guy said more than $24.4 million has been allocated to the Multicultural Affairs and Citizenship portfolio in this year’s State Budget. “Multiculturalism is a huge success in this state, it defines us and makes our society stronger,” he said.

This announcement came shortly before the Napthine government granted the ISKCON Hare Krishna Temple $500,000 for the redevelopment of their temple kitchen which allows for free food distribution to those less fortunate.

Minister Matthew Guy presented ISKCON representatives with the grant at an event held at the Temple. “This financial boost given by the Napthine Government along with funds raised by the Hindu community will enable the necessary refurbishments to the existing kitchen facility to assist more people in need with expanded vegetarian meal distribution,” an ISKCON statement said.

This was the second temple announcement made by Coalition representatives, after AUMSAI Sansthan Temple also recently received a visit from Matthew Guy. During this engagement, he announced that the current Victorian government will provide all possible support in securing land and building the new Sai Baba temple by AUMSAI. Lorraine Wreford MP (Member for Mordialloc), Cr Paul Peulich, Mayor of Kingston City Council and Cr Geoff Gledhill, from Kingston City Council, were also present at the temple.

Members of the Indian community were understandably pleased by this assurance from the Minister. Rampal Reddy Muthyala, AUMSAI Trustee, said, “We are very happy with the presence of the honorable minister and other public representatives of Victoria at the temple. We have gathered a good amount of support from devotees for building a new temple and with the help of the Victorian government, we shall be able to fulfil this dream within a couple of years.”