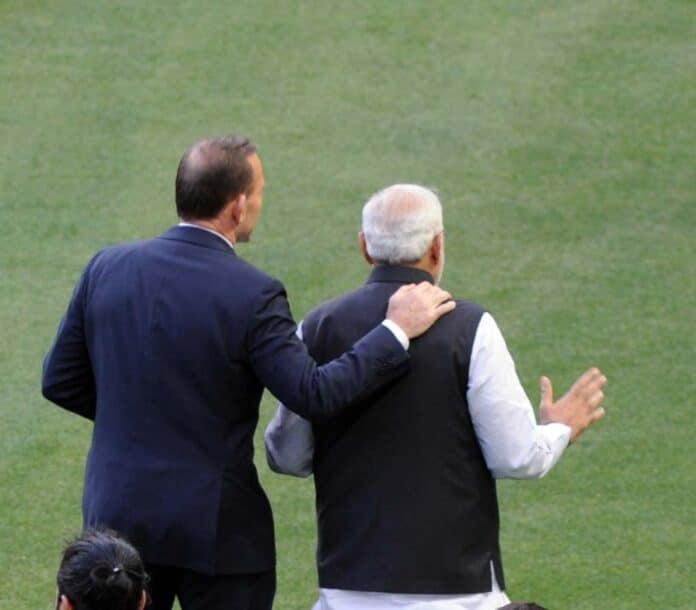 Reading Time: 3 minutesFull transcript of the remarks of Prime Minister Tony Abbott at the reception in honour of Indian Prime Minister Narendra Modi at the Melbourne Cricket Ground

What a thrill to be here at this iconic Australian landmark, this sacred site in the city of Melbourne.
That’s what it is: a sacred site, here, in the city of Melbourne.
I acknowledge the Leader of the Victorian Opposition the Labor Party’s Dan Andrews.
I acknowledge my good friend Premier Denis Napthine – a great friend of the Indian community.
Most of all I acknowledge so many people here to support our country, to support our relationship with magnificent India.
I believe last Sunday, there was a train full of people that left Melbourne for Sydney. It was dubbed “the Modi Express”.
I have a feeling “the Modi Express” has just come back to Melbourne!
It’s good that we are here at the Melbourne Cricket Ground because it is said that India and Australia share a great passion – we both love beating England at cricket.
It is a nice marker in our history that the first ever Test series that India played after independence was against Australia.
It was the first Test series that India played after independence against Australia and the third Test of that series was played here at the Melbourne Cricket Ground.
It was in that game that Sir Donald Bradman, who is as much a hero in India as in Australia, scored a century in both innings – very good for Donald.
In the fourth Test, The Don had to share the limelight with Vijay Hazare who became the first Indian cricketer ever to score a century in both innings of a Test match.
So, whatever the good Don could do, India – independent India – was able to trump.

Now, cricket is a wonderful game. It’s great to be here at the Cricket Ground but the relationship between Australia and India is about so much more than cricket.
We share a common heritage, we share a history, but our greatest bond – the greatest bond between our two countries – is the half million Australians of Indian background who have contributed so much to building modern Australia.
I want to say to all of you, your hard work, your commitment to family and community, your willingness to ‘have a go’ has made this great country even greater.
In any one year, there are about 40,000 Indian students studying here in Australia – many of them here in Melbourne.
Our duty – and I say this particularly here in Melbourne, Victoria – our duty is to take care of them as our own and to let all of them become ambassadors for India here and for Australia when they go home.
And with the New Colombo Plan, which is now swinging into action, thousands of Australian students will study in India – and they can be ambassadors for both of our countries as well.
I have to say I feel that I have got to know Prime Minister Modi very well here in Australia over the last few days but before that in India where I was his first overseas visitor after he became Prime Minister.
I regard Prime Minister Modi as more than a kindred spirit – as almost a brother.
He wants more trade, more jobs and more investment in infrastructure.
His commitment is to ‘red carpet, not red tape’ because he recognises that the foundation of wealth starts with the private sector.
And we both believe that the keys to our countries’ success is the power of our people.
Now, I want to say a very personal message to my fellow Australians of Indian background in closing these remarks: you have come to a magnificent country.
I say to all of my fellow Australians of Indian background: you have come to a magnificent country but you have come from a country that is led by a magnificent man and I know you will make him extremely welcome tonight.