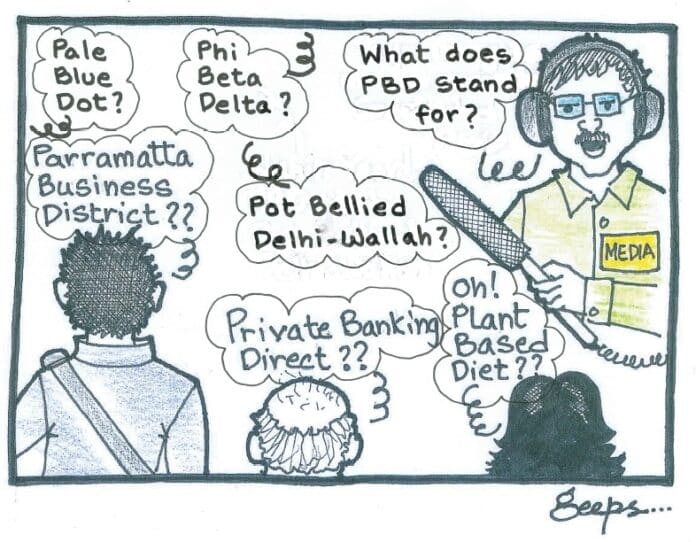 If the mission statement for the Regional Pravasi Bharitya Diwas (Overseas Indians Day) in Sydney was “Connecting for a Shared Future – the Indian Diaspora, India and the Pacific,” sadly, the event does not appear to have achieved its objective.
Poor attendance, unrealistic costing, a skew towards business in the program sessions, and less than satisfactory execution have been cited as factors.
With more than 800,000 Indian diaspora in Australia, New Zealand and the Pacific Island nations, Day One on November 10 saw less than 150 people in attendance. Numbers picked up on Day Two to about 350, but dwindled to about 200 on the last day.
The Sydney Convention Centre with its capacity of over 2,000 looked strangely desolate as key note speakers, some of them highly accomplished in their fields, made their addresses.

The concept of the Regional PBD
Regional PBDs are organised by the Indian Government’s Ministry of Overseas Affairs to provide a platform for the Indian community in a selected region of the world to contribute to the relationship between the countries of their region and India. Last year, the event was held at Port of Spain, Mauritius.
Earlier this year, there was much excitement in Australia’s Indian community as Sydney was picked to host the convention. An Indian High Commission communique said it expected “1,000 participants from within Australia and from Singapore, Malaysia, Indonesia, Fiji, New Zealand, PNG, Hong Kong, Phillippines and the Pacific Islands”.  The Premier of NSW Barry O’Farrell showed the same enthusiasm, declaring that he foresaw “an estimated $2.8 million worth of economic activity for NSW”.
In the end, no more than 350 delegates attended, of whom 140 were invited speakers. Most attendees were local Sydney-siders, with only a smattering from other states, predominantly Victoria. The overseas delegates made up a negligible number.

A note to organisers
It was clear to all those who attended that while it was an excellent opportunity to network, PBD Sydney could perhaps have been better thought through.
A press release by the organisers sent out upon the conclusion of the conference described it as “a very successful first-ever Regional Pravasi Bharatiya Divas held in Sydney”. They can continue to live with the delusion that it was “very successful,” or consider some of the following as suggestions. If they are not already doing such analyses, the community out there definitely is, and these suggestions are compiled from them.
The costing should have been reconsidered. Daily pricing or separate pricing for attending relevant forums would probably have brought in more attendance. A more suitable venue could have kept the prices down. Would a weekend PBD have been better? A solid publicity plan should have been put in place, much in advance, to ensure the message of the PBD got through clearly to the community at large. A more transparent way of working and organising the conference ought to have been adopted, rather than isolated decisions taken on the advice of a few who are largely not connected with the local community. Other minor plans to create goodwill in the community could have been implemented, such as free entry to attend the cultural performances (rather than have the maestros perform to empty halls).

The implications of Sydney PBD
The message that the Indian government will probably get out of the Sydney PBD, is that the Indian community in Australia (and the region) is too small, and/or too uninterested, for them to bother with.
Deplorably, this is far from the truth. The Indian community is strong and fully capable of making a difference, as mainstream politicians in Australia have already found out. Their strength, and this is not just in their numbers but also in terms of their influence, is set to grow in the very near future. The Indian government has been slow in engaging with Australia, and a strong Sydney PBD would have indicated to
them that the diaspora here could be relied upon to help them take the relationship further. Regrettably, this opportunity was missed.
On the other hand, the message that the Australian government will get out of the event, is that the organising committee could not engage the Indian community here. Both sides of the political divide are constantly on the lookout for strong Indian figures that they can count on to reach the community, a viable vote-bank. Perhaps the organisers were not those that the local diaspora look to as the true leaders of the community?
And finally, the message that the Indian community is going to take away from the Sydney PBD is this: the powers-that-be within the Indian government representatives here, as well as those within the community, need to be better in-touch with the community they serve, or hope to represent.